There’s a raggedy Raven in the skies.

I’ve been reading the Reverend George Low’s Fauna Orcadensis from 1813 on the Raven. It’s fascinating. In Scotland the Raven is called the Corbie:

In the winter and spring vast flocks of corbies are seen here, but are very wild; when breeding-time draws near they grow much thinner, many of them, I suppose, going off to other countries to breed. However, many continue here the whole year, as the country people, who live in the more hilly parts, daily experience to their loss; for in the time of hatching, and when the young flight are out, the parents become very impudent and voracious; then lambs, pigs, and chickens are destroyed in numbers; and though the corby has not strength to carry away a lamb or pig, yet it tears out their eyes, entrails, and what it can manage.

I’d love to see ‘vast flocks’ of Ravens. I counted over 20 on the west side of Westray last month. Ravens are scavengers and will peck the eyes out of sheep, it’s true, and not an old farmers’ tale. That’s because we’ve domesticated sheep by inbreeding them to remove wild and aggressive behaviour and to select for those which have twins. This means that when sheep are on their sides or back they can’t get up again, especially when they are pregnant. Domestic sheep are horribly inbred genetic freaks, bred to be fertile beyond their capabilities. A struggling and exhausted animal, powerless and vulnerable, is easy prey when on its back. Many sheep are left for weeks or even months at a time without supervision since we’ve killed all the wolves which used to live happily in balance with nature in the UK. The problem is low staffing levels to ensure the safety of sheep, not the presence of Ravens in the natural world.

Here I am rescuing a sheep stranded on its back.

The bill and claws of this bird are very strong, the latter much hooked. The colour is black, with a fine gloss; the legs black, as are all the larger feathers; the belly dusky. The quill-feathers make excellent writing-pens, are very strong and elastic, and last long.

I’ll have to try making some writing quills with Raven feathers. Maybe I could use natural ink from ink-cap mushrooms to dip them in? I won’t be shooting one to gather the feathers, though.

In hard winters the raven comes nearer the towns than usual for such a shy bird; then he is frequently seen by the shores, and even within a stone’s-throw of the houses of Stromness, picking up what garbage, &c. he can find, but retires from us at the return of spring, and betakes himself to the precipices of the hills and rocks, and sometimes to the steeples of the churches, or any ruined building, and there he makes his summer’s retreat, levying contributions on all around; far from so generous in this respect as our country-folks say of the eagle, who they tell us) takes but a hen from every house of the parish, and none from those in the neighbour-hood of his royal nest.

I love the description ‘royal nest’. This doesn’t look very regal, does it?

The Italian name of the Raven is Corvo imperiale, so the Reverend George Lowe wasn’t the only one to think Ravens have something of the lord and master about them.

Ravens have been sometimes seen white, and though this is but seldom the case, I have heard of two or three examples, both in these and rooks, though not all in Orkney: of the latter it was impossible, as they are seldom, if ever, seen here.

A white Raven would be interesting to see, although there’s far too much interest in genetic freaks.

Ravens have a complicated relationship with humans. 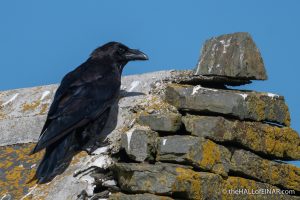 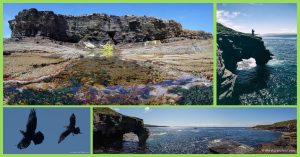 The pool There's a rock pool fed with fresh water fram a tiny waterfall on the west coast of Westray. I love… read more 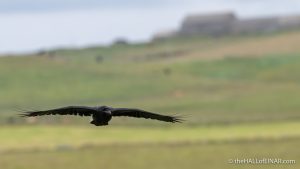 Ravens and rocks The west coast of Westray has some of the best walking in the islands. There are fossilised remains of ripples… read more 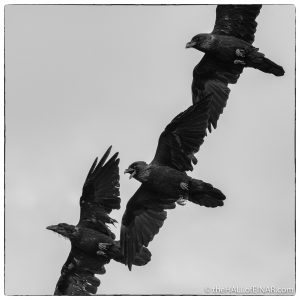 The Three Ravens Ravens are large and impressive birds. I'm at Noup Head, the lighthouse on Westray, when I see three of them… read more 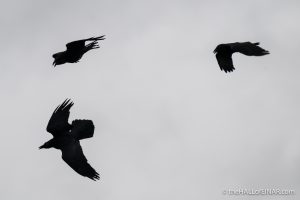 The Three Ravens We're at RSPB Lodmoor in Weymouth. It's a grey day. It's the perfect dramatic atmosphere for Ravens. There are a… read more 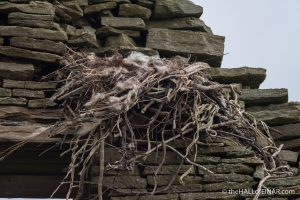 The linguistic displacement of Ravens There’s a Raven’s nest in this ruinous building on Westray: Ravens are special because, just like humans, they display linguistic… read more 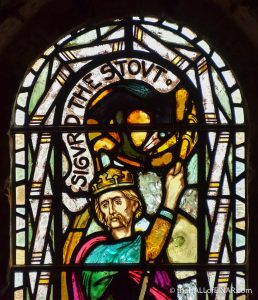 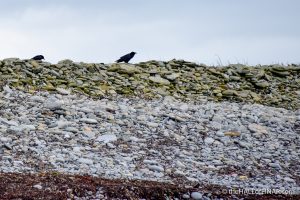