Today it’s the pages for the Brambling:

“The Brambling is a finch, and comes to England…” Were all Ladybird books only available in England? Not in Wales, or Scotland or Northern Ireland?

These were photographed in Italy and the Italian for Brambling is Peppola. I particularly like a local name for them which is Bramble Finch. The BTO (British Trust for Ornithology) has names of birds in multiple languages, including Gaelic, Welsh and Irish. There’s no Scots language that I can see, though, which is tragic because a name for the Brambling in Scotland is Tartan Back.

That suits it perfectly.

“Being a winter visitor only, the Brambling does not, of course, nest in this country.” That’s almost true. There was a breeding record in Sutherland in 1920 and the number of nesting attempts is somewhere between 0 and 2 every year.

I saw one on 4 April 1977 and noted it in my childhood nature notebooks. I think these were at Tandle Hill Park, where, earlier in my childhood, I was convinced that The Pogles lived, after seeing the children’s programme on our black and white TV.

“There are always plenty of Bramblings in the north of England during the winter”. Thankfully that’s still true and their conservation status is currently still green. I still see them only very rarely. Maybe I’m not in the right habitat? Have you seen them? They are always a pleasure to see. 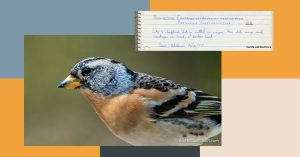 Brambling Brambling. Beautiful, aren't they? In the UK, they are birds of our winter and their breeding numbers are 0-2 nests… read more 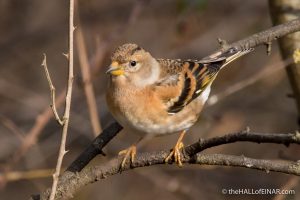 Brambling Forty years ago I saw a Brambling for the first time and noted it down in my childhood nature notebooks:… read more