This week I was inspired by the strand line:

Found is a book I bought at The Orcadian bookshop in Kirkwall in Orkney. A quick glance told me it was exactly my kind of book. The blurb sets the scene:

“The photographer Keith Allardyce first came to Orkney as a young man, absorbing the character of island life as a local assistant lighthouse keeper and an RSPB summer warden. He is well known for his best selling books on the northern lighthouses, At Scotland’s Edge and Scotland’s Edge Revisited: and his photographic record of Stromness in the book Sea Haven.”

If Found didn’t already exist, it would be necessary to invent it.

It’s a charming book full of fascinating characters and objects. Even a cursory glance will condemn you to at least half an hour of turning pages, studying details and contemplating how you’d feel finding such wonderful objects.

In fact, it’s taken me ages to write this review because I keep getting caught up in reading it and studying the photographs.

What better recommendation can there be?

I’ve seen a few upturned boats used as roofs on Orkney. This shows one of them:

It’s a simple idea, beautifully executed. I look forward to going into The Orcadian Bookshop in Kirkwall again and finding and buying Found II. It’s sad there won’t be a Found III.

It’s a wonderful legacy. Also found on the strand line is Kitty Macfarlane:

Sometimes you hear something which speaks to you so perfectly, it’s as if you commissioned it. That’s true for me of Kitty Macfarlane’s album Namer of Clouds. It came out in 2018 (surely time for a follow up?) and still sounds as fresh as it did the first moment I heard it.

Imagine someone writing about Starlings on the Somerset levels, or turning an everyday story of the magical world of eels into a meditation on freedom of movement and you won’t be far short of this wonderful album.

Here she is in her native Somerset with Man, Friendship:

The album is whimsical and melodic and conjures an elegiac quality rooted in the natural world. Every song transports you somewhere interesting.

I particularly like the way in which she presents her songs so simply when they are so complex and sophisticated. Her willingness to experiment with field recordings, including of Chiara Vigo, the Italian weaver of sea silk is admirable. It’s an ambitious album that only someone as yet unaware of any limits to her ambition could have achieved.

The production by the ever-talented Sam Kelly and Jacob J Stoney sets each glittering song in a setting of shining silver.

I particularly like Wrecking Days, inspired by Jane Darke’s documentary ‘The Wrecking Season’, with stories of the strand line and our impact on the planet.

Here’s one of my favourites from Namer of Clouds, called Glass Eel:

I bought my copy at one of several live shows I’ve seen.

The sleeve has great photography by filmmaker and musician Todd Macdonald. Thanks for keeping those horizons level, Todd. It really deserves a vinyl release so we can all luxuriate in large-scale lyrics and imagery to go with the greater contemplation which comes from actively engaging in setting an analogue disc spinning.

The linocut cards in Kitty’s shop are sign of her relentless creativity. Personally, my eyes were drawn towards the Eel temporary tattoos. Classic merchandise of the highest order. Every band should have them.

That’s it for this week.
I’ll be back with more reviews of things you might adore next Sunday.
In the meantime, I wish you a great week. Keep safe, everyone, and keep your eyes on the strand line. You never know what you might find. 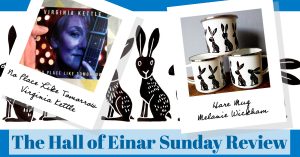 The Hall of Einar Sunday Review #13 Hello and welcome to my Sunday Review. Every week I read great wildlife and nature books, see engrossing websites and… read more 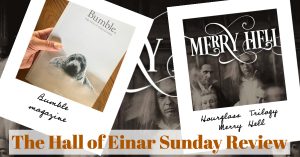 The Hall of Einar Sunday Review #12 Hello and welcome to my Sunday Review. Every week I read great wildlife and nature books, see engrossing websites and… read more 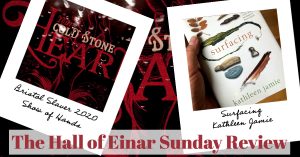 The Hall of Einar Sunday Review #11 Hello and welcome to my Sunday Review. Every week I read great wildlife and nature books, see engrossing websites and… read more 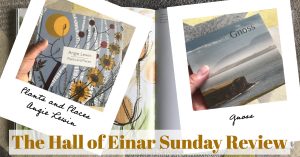 The Hall of Einar Sunday Review #10 Hello and welcome to my Sunday Review. Every week I read great wildlife and nature books, see engrossing websites and… read more 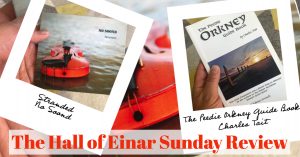 The Hall of Einar Sunday Review #9 Hello and welcome to my Sunday Review. Every week I read great wildlife and nature books, see engrossing websites and… read more 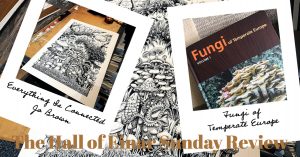 The Hall of Einar Sunday Review #7 Everything Is Connected by Jo Brown (Bernoid) and Fungi of Temperate Europe - Volumes 1 & 2. read more 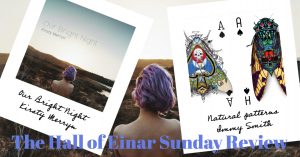 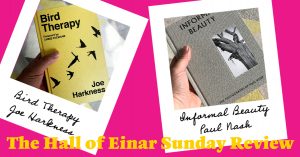 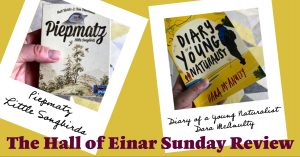 One Response to "The Hall of Einar Sunday Review #8"