2019 has seen me explore Devon a little more. I’ve been out onto Emsworthy Mire on Dartmoor a few times to enjoy the fungi and the Ring Ouzels.

I’ve been to Trendlebere Down to see a family of Stonechats and had wonderful afternoons getting close to them:

The Stonechats of Trendlebere Down 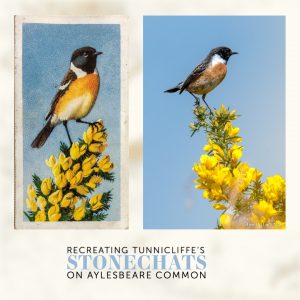 Recreating Tunnicliffe’s Stonechats Ever since I discovered Stonechats and Charles Tunnicliffe's portrait of them, I've wanted to reproduce his painting in a photograph.… read more 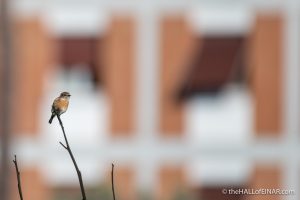 Chatting Returning to a chatting Stonechat. They really do love the highest perches available. read more 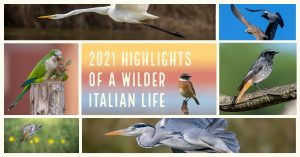 2021 highlights of a wilder Italian life 2021 was another year spent on-hold, waiting with awful music playing, and the same repeated message, with no guarantee that… read more 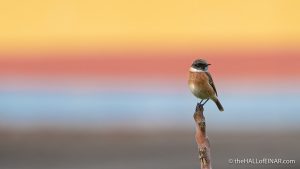 I finally discovered where the lowland heath Bovey Heathfield was – in the ugliest place possible, surrounded by ‘A’ roads and industrial estates and yet home to rare species and beautiful views:

One of the ultimate highlights of the last year was visiting a bat cave in south Devon and seeing four different species of bat:

How amazing are they?

I had a fascinating afternoon discovering the twisted forms of the Lone Trees on Dartmoor:

So much is yet to be discovered about Pied Flycatchers. We have ringed 645,000 Pied Flycatchers in the UK since 1909, and yet have found just five UK breeding birds again (and none of the ones which hatched in the UK) in their African wintering grounds. Ringing 129,000 in summer to only find one in winter is a spectacular amount of effort over the past 110 years, with very little to show for it.

I’ve enjoyed finding out some more of the science behind nature. Aren’t you pleased you read blogs with titles like these?:

‘Pink!’ The nine vocalisation vocabulary of the Chaffinch

A fungus, the Ice Man and rotten wood that smells of green apples

I also had fun recording a YouTube video of my attempts to get close to the rare Great Grey Shrike on Dartmoor. What a thrill that was:

Here’s one of the images I captured after hours of fieldwork:

What will 2020 bring? My son bought me detailed waterproof maps of Dartmoor as a Christmas present. I can see a lot more mud in my future. Be prepared.