This week has been a thrill and the realisation of a dream. I’ve been able to walk the whole of Westray’s coast. It’s allowed me to join up all the bits of the coast I’ve visited before into a single circular route.

I’ve been able to think, “Oh so that beach is just round that headland”, when I hadn’t been able to put a full picture together before of how everything joins up. The landscape now makes sense to me, with all the beaches and the headlands and the sea caves and the geos and the farms and the ruins and the ancient mounds and churches all in a sequence.

Today is my final walk. The weather is still beautiful, so I drive across the Island. My car seat-belt-not-on alarm goes off insistently and annoyingly as I drive. It’s not me, my seat belt is on. It’s my camera. It’s sat on the passenger seat and it’s so heavy my car thinks it needs its seat belt on. Maybe it does. I park my bicycle at Mae Sands and drive the six or seven miles to Twiness to begin the walk:

Looking behind I can see my footprints snaking along the sand:

There are Pipits on the rocks:

There’s another style of stile and a wrecked car which has been sent ‘over the top’. It’s just that it wasn’t a very long way down for this one:

It’s a glorious palette of colours. The intensity of the green of the grass shows why this is such a productive farming island. All that moisture and long summer days give grass a wonderful growing season.

There’s a Lion’s Mane jellyfish on the sand:

They can only control their vertical position and so are at the mercy of the tides and currents. There are several species which come ashore here:

The curious cattle appear above me and gather. I seem to be the most interesting thing that’s happened to them in days. I can smell their sweet breath from here:

They each have their own character and facial features which are clearly recognisable. Some are more distinct than others. This one, for instance; this one looks how I feel:

Which is your favourite?

They are thoroughly entertaining.

I’m enjoying their company until I notice the local bull has ambled over to find out what his herd are doing:

It’s at this point that I decide to carry on my walk.

There are hundreds of thousands of worms eating the sand and leaving worm casts on the beach here:

Further on there are beautiful wave patterns:

They look just like the fossilised ripple beaches from Lake Orcadie from 380 million years ago which are all along the shores here.

Its shadow is massive, as I see the darkness rush over the sand:

There’s a flock of tiny waders on the beach. There are Ringed Plover and probably Dunlin and Sanderling in amongst them:

I see a Heron over the Bay of Tuquoy. Its prehistoric outline graces the intense blue sky.

Past the Bay of Tuqouy there’s a church marked on the map. I’ve been here before. It’s called Cross Kirk and has the words (rems of) after its name on the O.S. map. They’re quite well preserved remains. The grass is green the stonework is safe and there’s a sea wall to protect it against the worst of the waves coming over Kirk Taing.

It looks like the sort of place which should have Shakespearean dramas acted out in it, if only the actors could make themselves heard over the sound of the wind. It was built around 1150 and still has its original barrel-vaulted chancel. Built in the 12th Century and the stonework’s still perfect? What amazing craft skills.

Just to the west is the settlement of Tuquoy which was excavated in the 1980s. It had a high-status hall, a smithy and pottery from between the 13th and 15th Centuries. There’s even good evidence it may have been the home of Thorkel Flettir, and his heir Halflidi, who were allies of Rognvald Earl of Orkney in the 1130s. How cool is that?

There’s the skeleton of a dolphin or porpoise on the rocky shore. It’s been picked clean about as perfectly as a museum specimen:

It’s a shame the skull’s not there. I could have added it to my skull collection. Don’t worry about me, I’m fine.

There’s a noust just above the beach. A noust is an ancient open-topped garage for a boat – at least that’s the best description I can come up with for it.

I can see the Laird’s Hut in front of me. I’ve made it! I’ve walked around the whole of the Island.

It’s taken nearly two and a half hours to walk just over six miles. I’ve been out a lot longer than that because I’ve been stopping to photograph the birds and admire the day.

It was less than the 50 miles estimated by the postman in 1967. My app says it’s more like 45, although it kept stopping and starting every time I stopped to take a photograph. You can imagine just how many times that was, I’m sure.  I sit in the beauty of Mae Sands and wonder; Why did I do it? I’ve spent a week walking the entire circumference of a remote Orkney island where just 600 people make their home. I’ve been following in the footsteps of Peter MacIntyre who set out one morning in 1967 from The Laird’s Hut to walk the Westray Coast in a day. But why?

It’s taken me a week. I’ve fallen down rabbit holes, tripped and landed face first in the heather, lost a small camera to the North Sea and hobbled with a manky toe, but I’ve made it. I’ve seen incredible beaches, beautiful skies, glorious sunsets, fabulous birds and the occasional grumpy seal, and photographed them all.

I’ve had a lot of time to think. What have I learned from the experience?

The first thing I’ve learned is about gratitude. The only reason I’m here, having this experience, is because of my parents. It was my mum who taught me to read and indulged my childhood love of the natural world despite her morbid fear of worms. It was my dad who gave me money towards my large camera, bought me these, most wonderful, walking boots and went shopping with me for camouflage gear; although he did spend all his time in the army surplus shop saying he couldn’t see where I was. I was only able to do this because of them. I’m eternally grateful to them.

The second thing I’ve learned is about community. I’ve walked around everyone who lives here, encompassing their daily lives in my walk. I’ve seen the farmers hard at work, the children playing in the school playground, and I’ve sat eating a picnic in the 1,000 year old house of a Viking fishing and farming family. I’ve felt the weight of the generations who have fished and farmed and made this small island their home. That’s only possible through the love and respect we give one another despite our differences. It takes every one of the people here to make this community and we’re all richer because of them.

The last thing I’ve learned is about culture. Culture is ‘the way we do things here’. Our culture gets passed on through time as people take things that inspire them, whether it’s songs and stories, ways of making a living, or ways of treating one another, and make them their own. I hope people will be inspired in the future by my continuation of Peter MacIntyre’s story to make walking the coast a part of their own story.

Sadly, Peter MacIntyre died a few years after doing his Westray walk, but in my mind he’s still there, setting off in his pullover and gym shoes, looking back over his shoulder to see his wife waving a tea towel at him, and striding out around this Island, whistling. He’s still there. He will always be there as long as people walk this coast. I can only hope that my spirit will be there too, humming inanely, still carrying that heavy camera and still looking for that Hen Harrier to photograph. Westray: there’s no better place to be.

Back home I lie on my bed for forty minutes before I realise my car windows are open and my camera’s still on the passenger seat. I pop downstairs to get it and, as I do, I see a Hen Harrier fly past my house and across my back garden.

Here’s just a brief note to say thank you to all the people who took the time to comment and the trouble to send me messages of support over this week of walks. It was lovely to hear from you all. I hope you’ve enjoyed sharing in my adventure and I hope some of you will be inspired to make Westray a part of your own life’s story.. 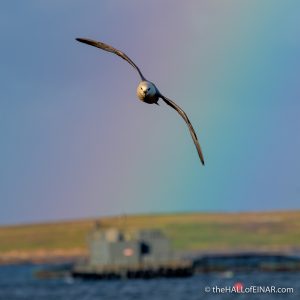 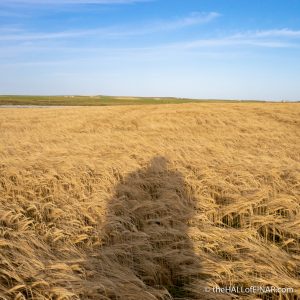 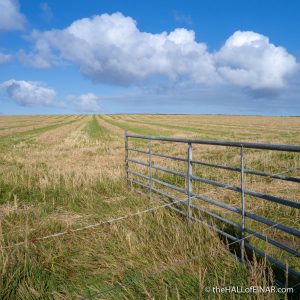