Wildlife used to be hyper-abundant. What we see as normal is really a state of extreme scarcity and depletion. We have gone from enormous, plague-like, flocks of birds, and seemingly never-ending shoals of fish, with huge wandering groups of large mammals, to this; our bereft world. All this has happened in many cases within our living memory. We’ve also noticed it happening, but, like the height of a growing child, you only really notice if you’re separated from them for a while. It’s been imperceptible, but it’s been there.

I was reading a copy of Lilliput magazine today from July 1955. In it is this wonderful period-piece about Salmon fishing on the River Wye: 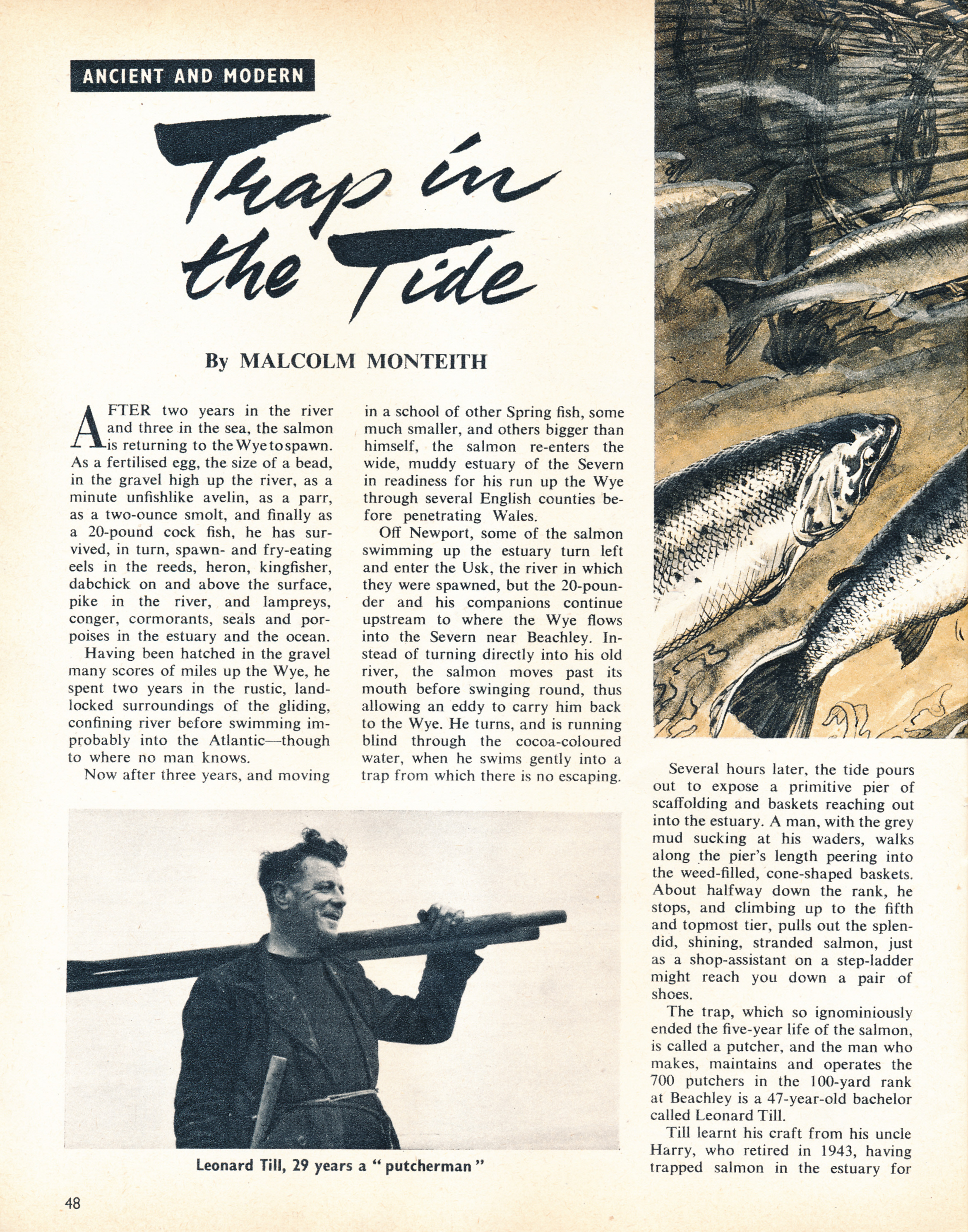 In the article a 47 year old man called Leonard Till works the River Wye at Beachley with 700 Willow and Hazel traps, called putchers, arranged in a rank 100 years long. Putchers are tapering baskets into which Salmon swim and find themselves trapped because they can’t swim in reverse. Installing putchers was made illegal by the Salmon Fishery Acts of 1861 and 1865 unless they had been there for as long as records existed, called immemorial usage. Only these ‘privileged engines’ could be used and all new ones were forbidden.

Salmon fishing is something I have very strong memories of from childhood. Two weeks holiday by train to Shaldon or Teignmouth on the River Teign in Regatta Week in August meant we could watch local men fishing for Salmon. A small boat would set off from Shaldon’s red-sand beach and pay-out an orange net with white floats on it from the back. They would make a huge loop of the estuary and head back to the beach. There, a group would haul the net in, with someone folding it neatly behind them. They seemed so strong and such experts at working in unison. The loop of visible floats would get smaller and smaller on the water as the net was hauled in. Suddenly a three-foot long silver Salmon would erupt from the water in a magnificent bid for freedom and leap over the floats and be free. The men would carry on pulling despite the gasps and audible disappointment from the onlookers on the beach. The net would be so far in that it was barely the size of a bathtub and then there they were, gleaming in the sunshine like angels, three huge Salmon.

As an adult I moved to live in Devon and went to the same beach. One of my friend’s husbands owned a licence to fish for Salmon on the Teign and I always wanted to go out with them but never got the chance. He was thinking of giving up the licence because there just weren’t the Salmon to catch.

The same is true of many rivers in the UK. Numbers of Salmon have nosedived faster than the Teign Salmon I saw jumping in my childhood. What’s happened? Pollution, habitat destruction and overgrazing of livestock. Don’t believe me? The normal acidity or alkalinity of a river is about pH 6.5. Vinegar can be between pH 2.4 to 3.4. The River Wye was pH 4. I know that people like to put vinegar on their fish and chips but you can’t expect Salmon to live in water which is as acid as vinegar. 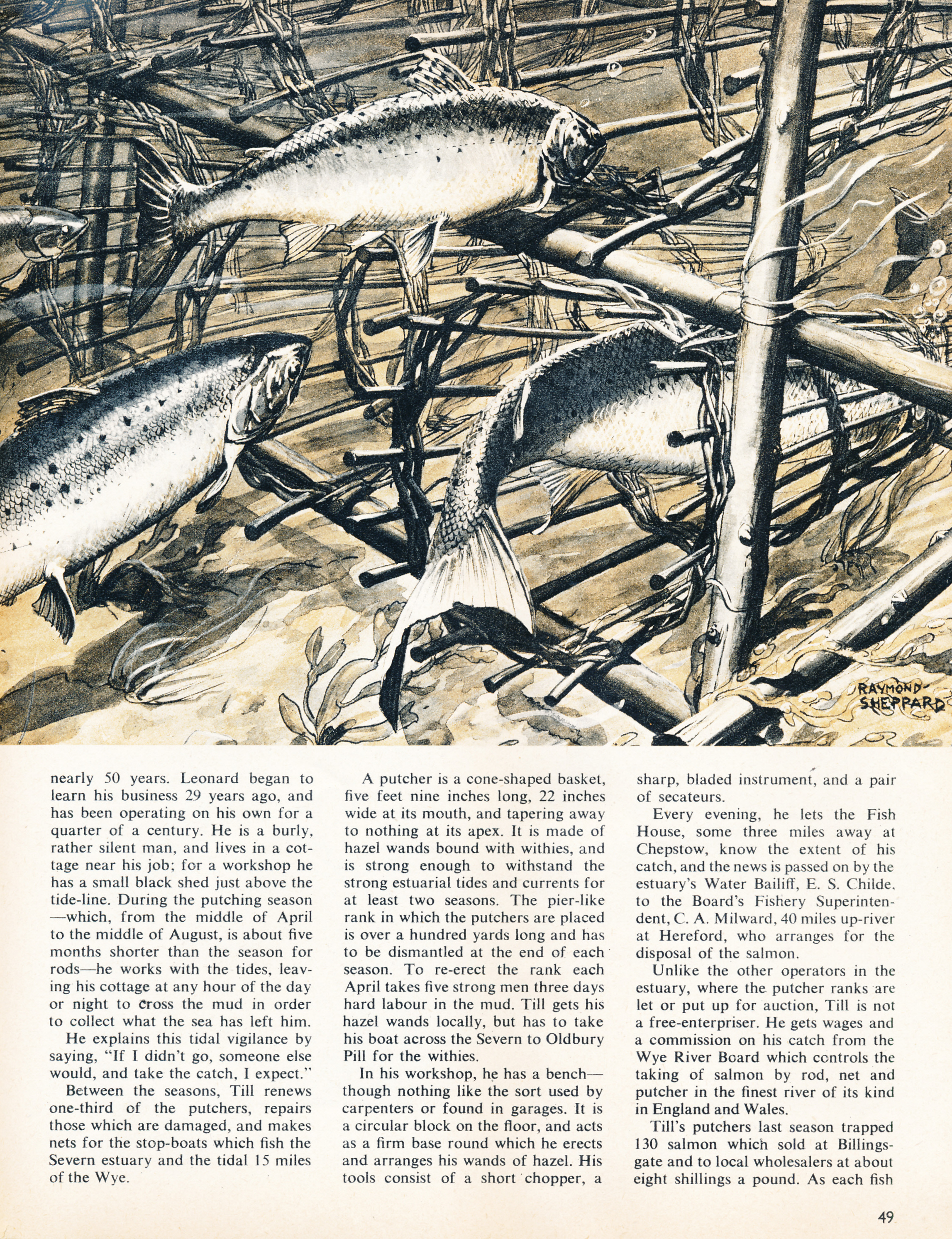 “Mr Robert Pashley, of Ross-on-Wye, has taken as many as 261 fish in 26 days and 678 in a season.” That’s a distant fantasy for many people fishing on the Wye today.

What pollution has damaged the wild habitat of our precious Salmon? The accidental discharge of 20 tons of sugar in Hereford in 1994 can’t have helped. Acid rain in the artificial forests at high altitude also poisoned the Wye’s tributaries.

What habitat destruction has impacted the population of Salmon? Because of removal of natural tree cover and the ruining of soils, the far reaches of the River became susceptible to flooding as there were greatly reduced natural ‘soaks’ to mop up heavy rainfall and the poor soils were washed into the River. Rather than repairing the environmental damage, a flood defence scheme was built on the Lugg, a major River Wye tributary, which didn’t have a fish-pass to allow Salmon to migrate upstream. In addition, overgrazing by sheep caused the River to become wider and shallower rather than having the narrow and deep channel preferred by Brown Trout and Salmon. 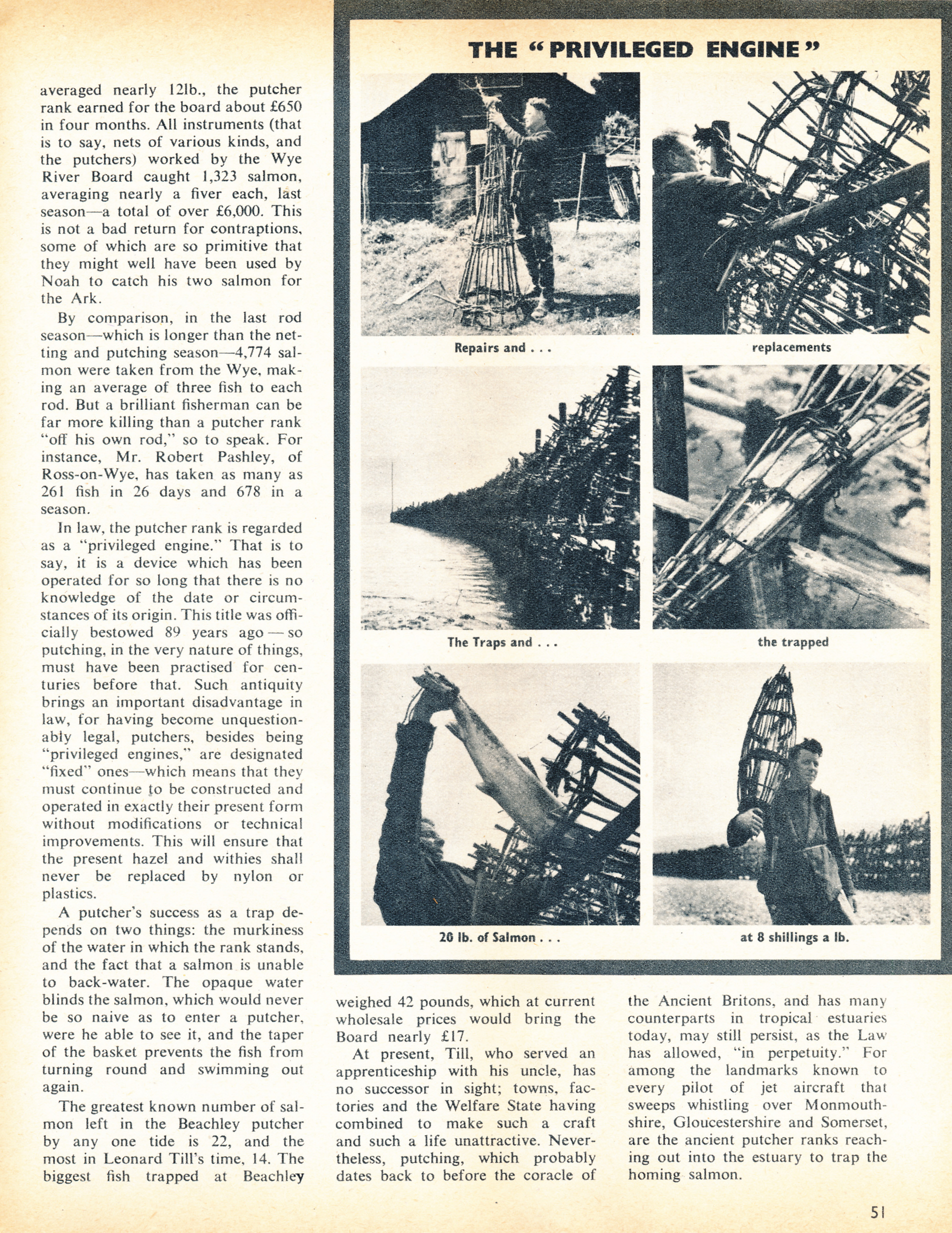 Nets and putchers caught 1,323 Salmon in the 1954 season and rod and line caught 4,774. In the late 1980s 6,000 Salmon were still being caught each year. By 2012 it was 357. In 2016 there were 1,665 Salmon caught on the Wye. That’s seen as a success, and people have been celebrating spending £9m over 20 years to restore the habitat. That’s public money to repair the damage of private industry, with loggers, sheep grazers and polluters all making money while destroying our shared environment. Even worse, in some cases the public has subsidised these activities.

It’s still nowhere near the historic hyper-abundance that once would have had the fresh clean waters of the Wye teeming with fish.

Raymond Sheppard
The illustration in this article is by Raymond Sheppard. Even over 60 years later it’s still full of drama and beautifully executed within the limits of the printing techniques of the time. Raymond Sheppard illustrated Hemingway’s The Old Man and the Sea followed by success as the story illustrator for Lilliput. I really admire his work. 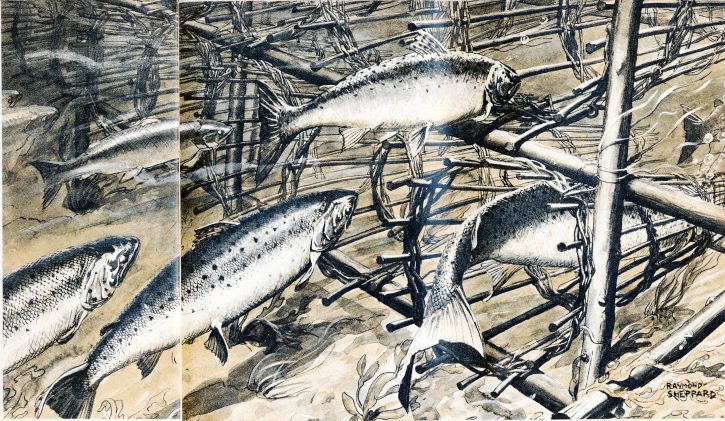