I’d love to be able to identify the different species of Pipit on Westray. The problem is that I can’t get near them. And even if I could get near them, my telephoto lens is being repaired so my view is still tiny. Apparently there are two species of Pipit commonly found on Westray; the Meadow Pipit and the Rock Pipit. Meadow Pipits are found in meadows and Rock Pipits are found on the rocky seashore. That seems clear, it’s just that the meadows on Westray end in rocky seashore so both exist side by side. I’m going to have to persist in my attempts to distinguish between them.

I’m thankful that there are unlikely to be Tree Pipits on Westray, except in extreme circumstances. At least that makes identification easier. Tree Pipits are beautiful birds which I’ve seen before in Devon:

A Pipit up a tree

Thankfully I can largely rule out Tree Pipits; because of the lack of trees.

Just now I can see a pipit on the rocks below: 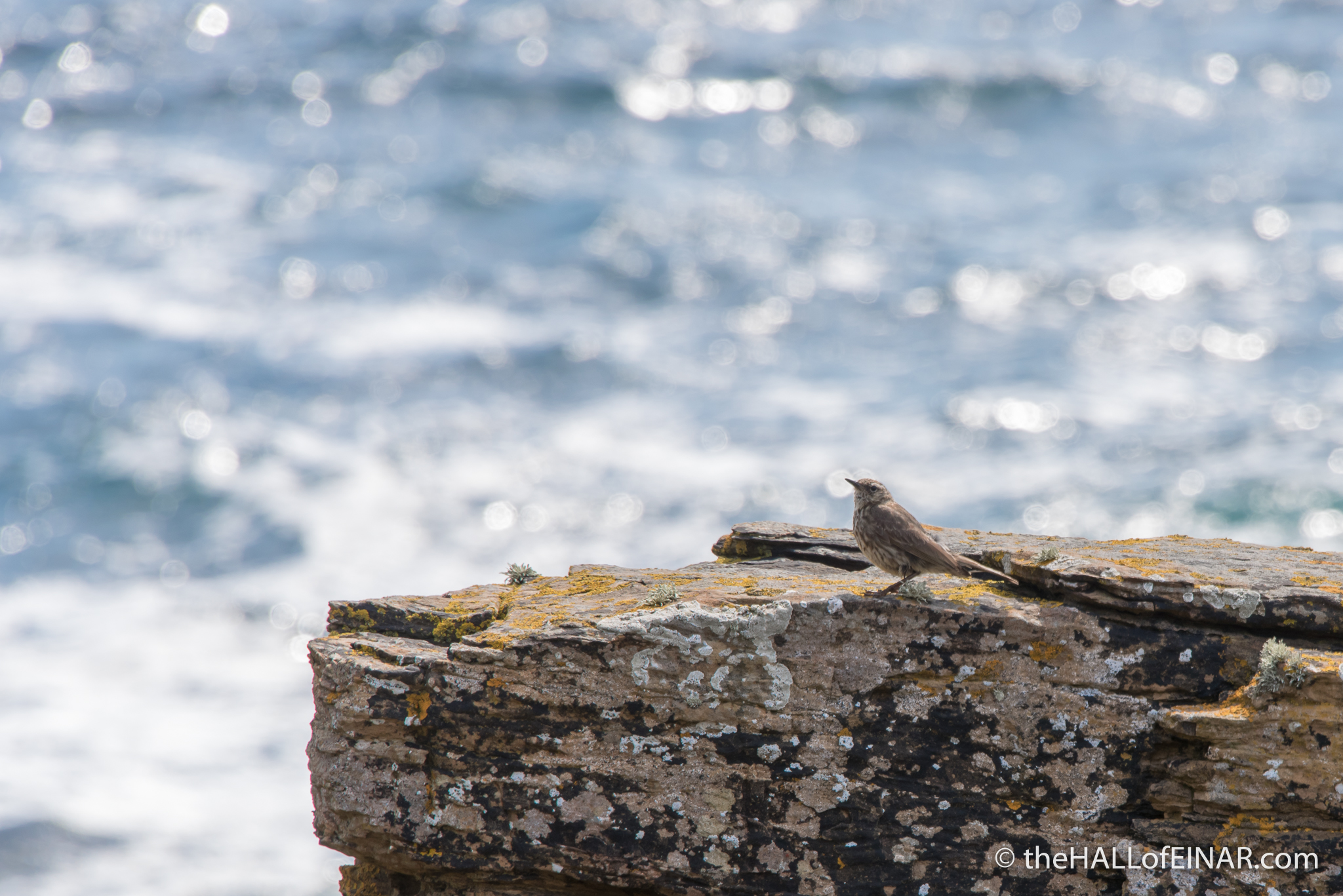 I wonder which one it is? I’m lucky that I meet Don, an expert, walking back to the car who tells me the it’s all in the legs:

What a shame I can’t see the legs on this one at all.

If I can’t see the legs then it’s all in the plumage:

I think it’s a Rock Pipit.

The RSPB say:
“The rock pipit is a large stocky pipit, larger than a meadow pipit and smaller than a starling. It is streaky olive-brown above and dirty white underneath with dark streaking. It breeds around the coast where there are rocky beaches.”

I’ve seen a Rock Pipit before on Westray and managed a poor photograph of it then too:

A few days later and I’m faced with another Pipit. This time I’m in full camouflage but it’s useless; any movement and it flits off again. I have to stay prostrated on the rocks waiting for it to return to its favourite rock. 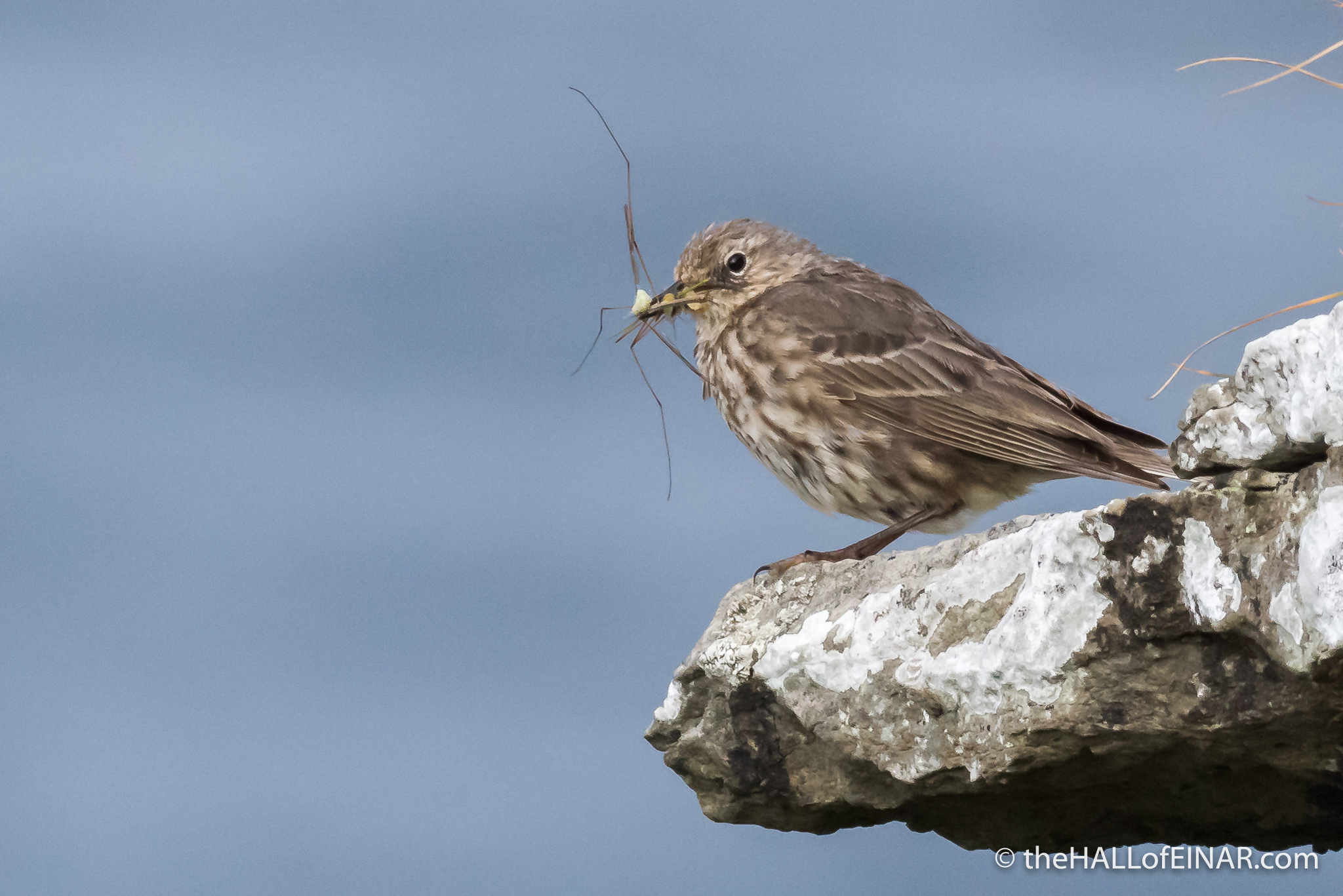 There it is. A Rock Pipit with a juicy Cranefly.

It has dark legs, but I’m not sure how light a Meadow Pipit’s legs are.

Driving home a few days later we see a pipit on a post by the side of the road. I grind the car to a halt and the Puffin Whisperer is kind enough to lend me her camera for a few shots. 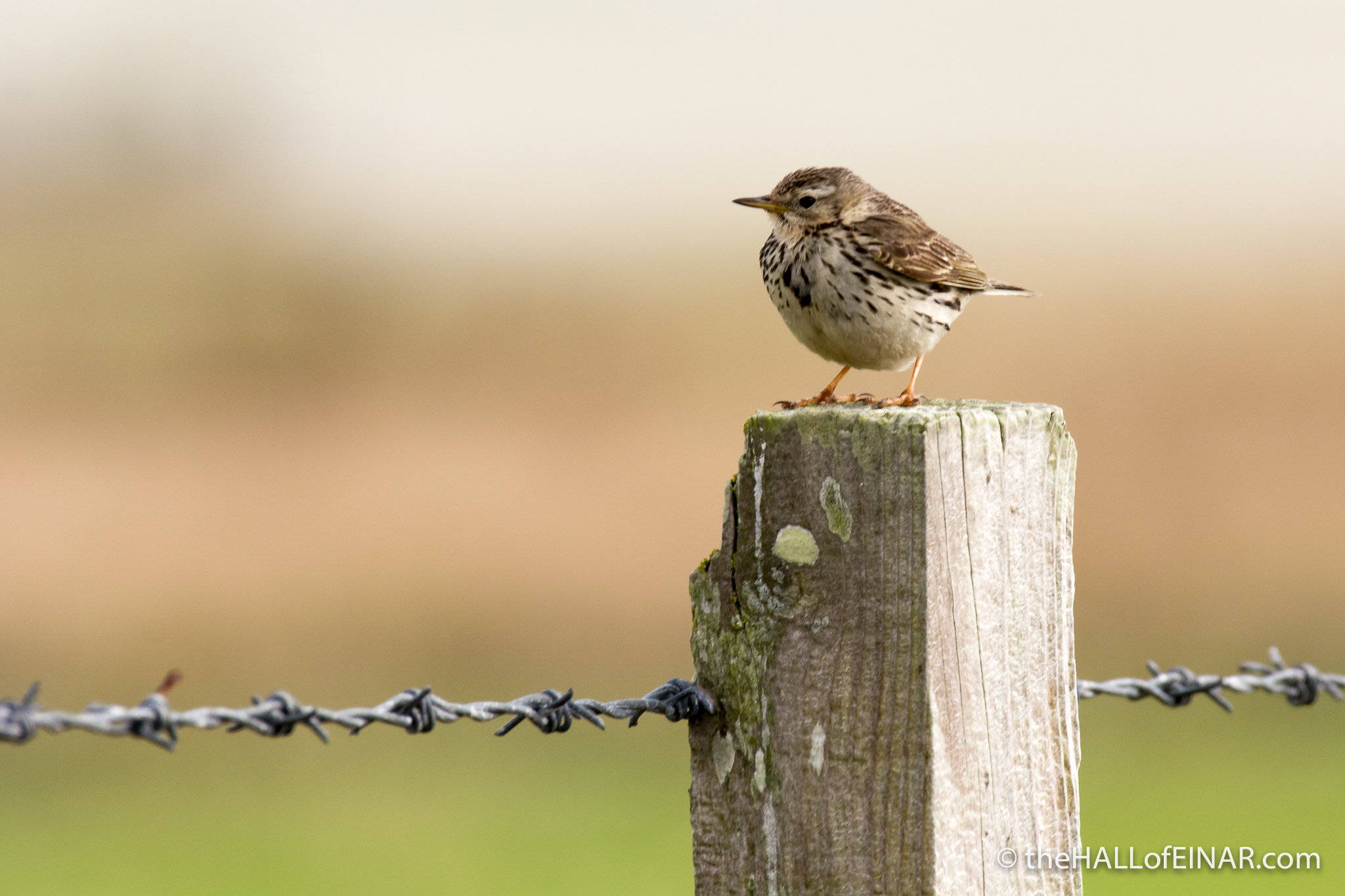 I even get a photograph of it calling and in full voice. Glorious. It’s got flesh coloured legs. It’s a Meadow Pipit. It’s a much more beautiful bird:

I first saw a Meadow Pipit 40 years ago when my friend Michael brought me a freshly dead one. That’s the sort of thing true friends do, without judging you or asking questions. I photographed it and wrote about it in my 1970s nature notebooks:

Meadow Pipit – forty years ago in my nature notebooks

I’m delighted that this one is very much alive.

A few days later and my telephoto lens is back from being repaired and I see a pipit on the angelica. What an elegant bird it is: 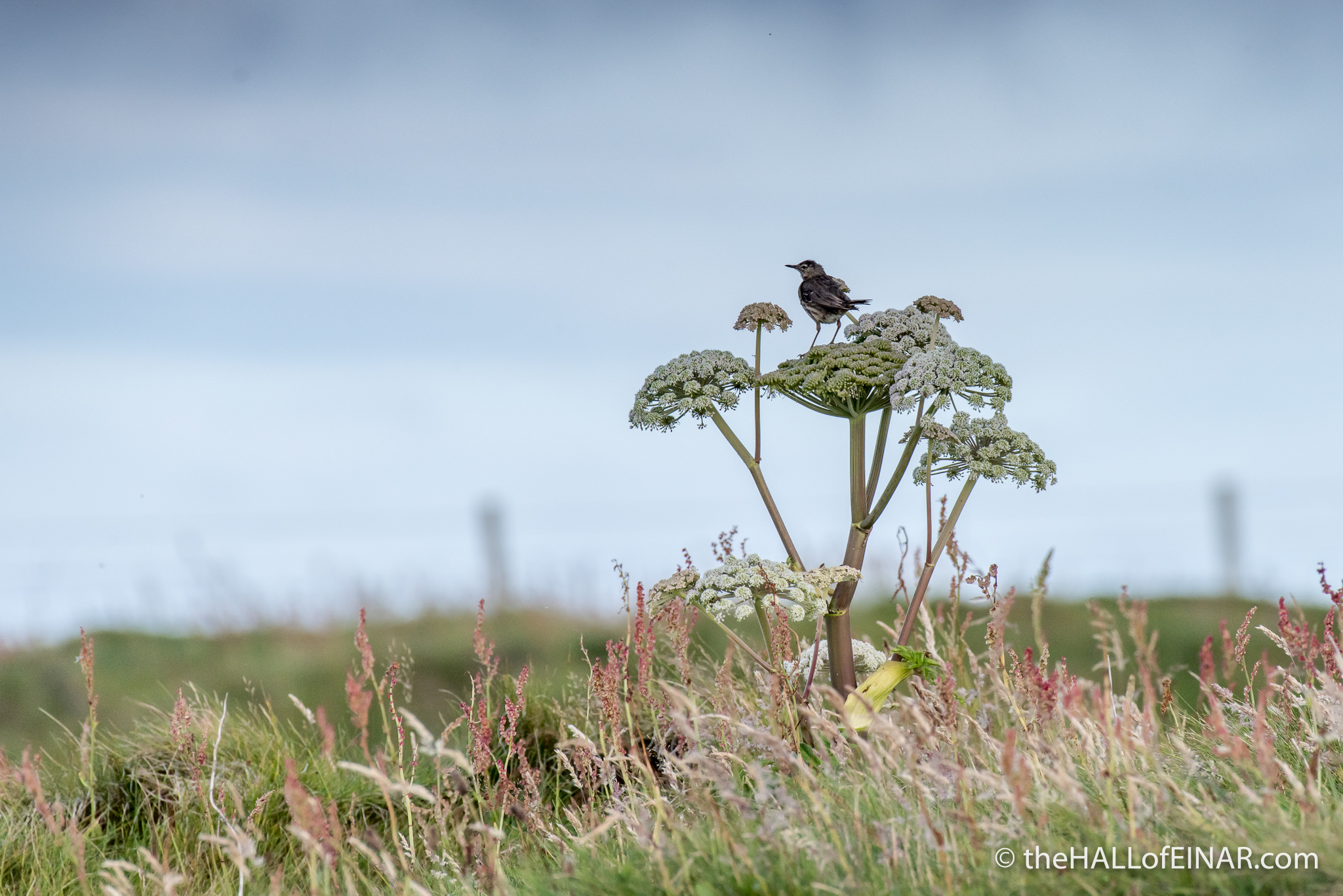 It’s caught a woodlouse and poses on the barbed wire for me: 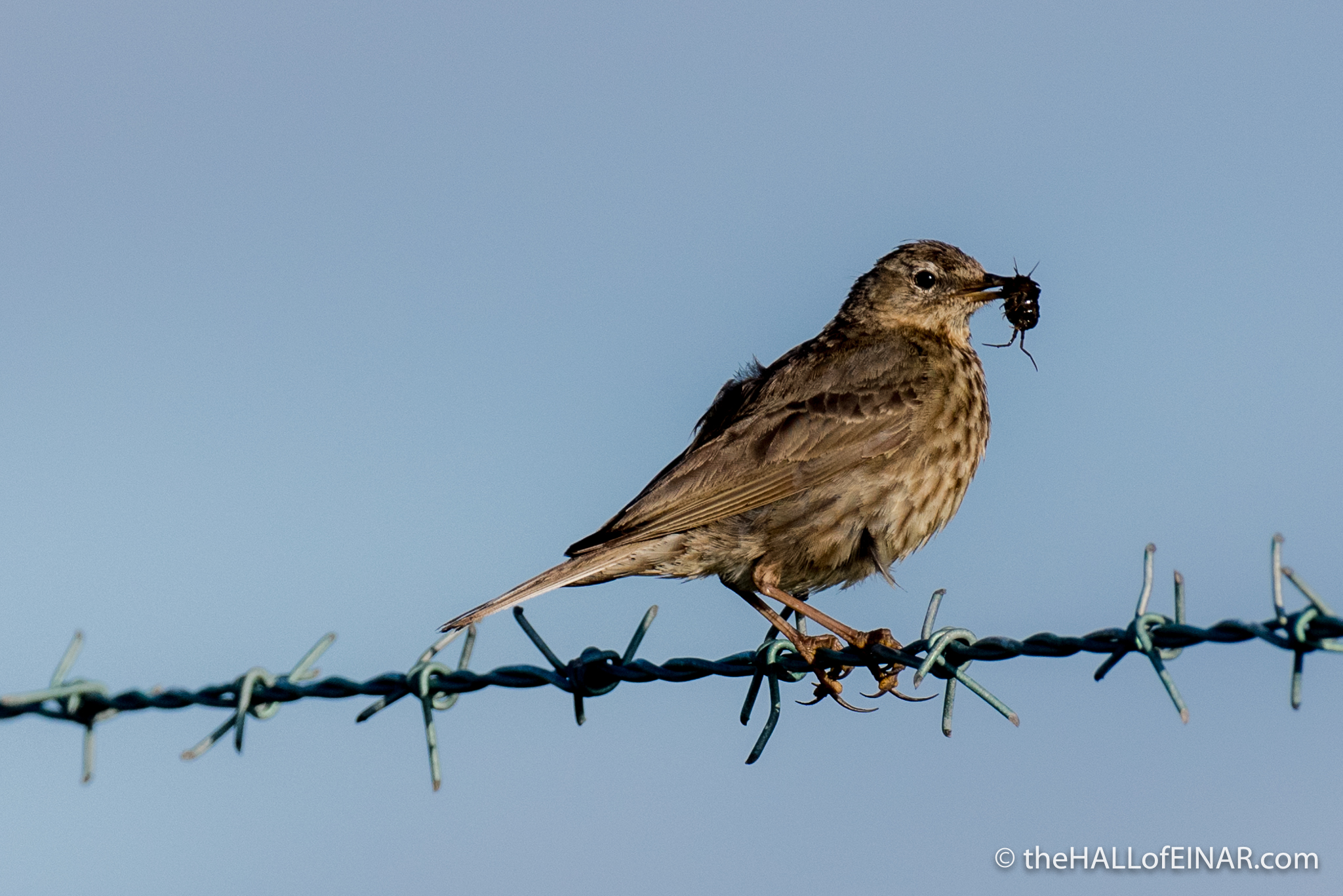 Its claws are nearly as long as the barbs on the wire.

Then it stands on one leg and calls and calls with a beautiful voice. It was worth the wait. 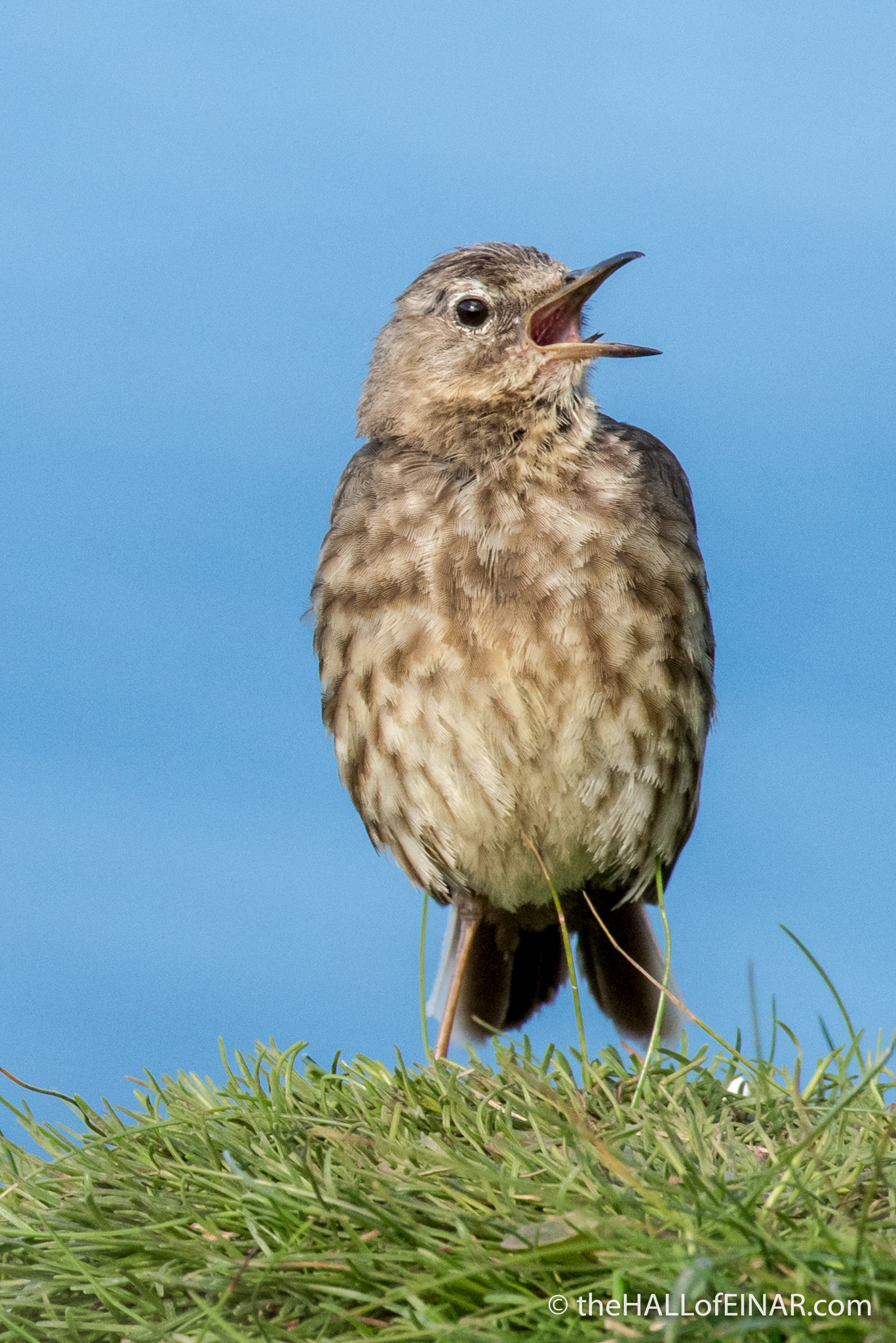 I can now tell them apart.