I was recently informed on Facebook (if that’s even possible) that young birds are called chicks and not babies. Someone responded with ‘cygnets’. I think goslings or ducklings would have been suitable answers too.

When I spotted a Song Thrushes’ nest, uncovered by irresponsible work at this time of year on a railway bridge, the chicks were well grown but still not ready to fledge. Here’s the damage:

I went back the day after seeing the destruction of their nesting site to find this:

Nothing. All the chicks had gone and the nest didn’t look quite the same. My fear is that predators got to it before they had time to fledge. It’s a perilous life.

I’ve spent the last week following a Long-Tailed Bushtit’s nest. Having said that, I’ve never seen the nest. It’s buried in brambles and utterly impenetrable, except to a crow or magpie. Will they survive? Or will they fall victim to human interference or predators or both?

I walk towards the nest and find there’s no activity. The hustle and bustle of the week has gone. There’s nothing here. There are no contact calls in the trees, no nervous flights to perches overlooking the nest. No desperate dashes to cover with a succession of caterpillars. Nothing.

They’ve fledged today and I’ve missed it. I’m disgruntled and disconsolate. I meander without purpose for a few hours taking photographs of anything which comes my way, which is precious little. It’s time to go home now and instead I take the third of the three ways to the crossroads next to the nest, and not the one which leads home.

Then I hear it. The familiar sound of Long-Tailed Bushtits. They’re here. I look up, searching for them and spot this on a branch overhead:

There are four of them. They are insanely cute. I almost cry.

There are two facing my way and two sandwiched in the middle with their bottoms towards me. One of the adults arrives with a green caterpillar.

I love how disappointed the one on the left is at not getting fed. It’s craning its neck and gaping desperately. Caterpillar does look tasty, if you’re a Long-Tailed Bushtit.

I spot another two of them higher up. There are six chicks. Excellent. Everything is calm until there’s the possibility of another caterpillar:

There are Magpies about and this adult is still on high alert.

If anyone thought that the fledglings leaving the nest would be the end of the pressure, they were mistaken; speaking as a man whose children have all left home.

And finally, the face that kills me.

It’s been a pleasure to follow the caterpillar delivery service. I hope you’ve enjoyed watching their adventures with me. Long-Tailed Bushtits live an average of two years and only ever have one brood a year, so that’s it for their attempt to have babies for this year or maybe ever.

And yes, I did say babies. 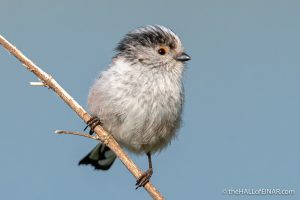 Admit it You're just a little bit in love with Long-Tailed Bushtits, aren't you? read more 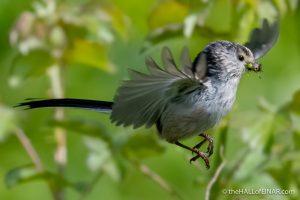 Fuzzy pink lollipops Long-Tailed Tits are one of our most loved garden birds. They are tiny, busy, social visitors to urban gardens and… read more 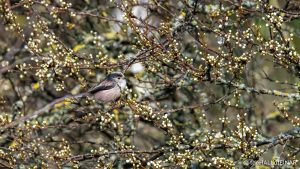 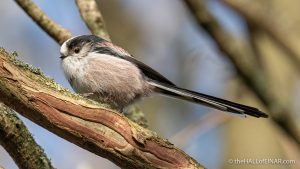 Bumbarrels on parade There's a small group of Long-Tailed Bushtits calling overhead. They're vibrating a 'Tseee-Tseee' call amongst the empty branches as they… read more 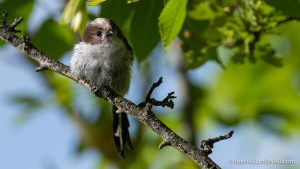