It’s beautiful at the top of Pico do Arieiro on Madeira. Apart from the huge air defence radar station, that is. There’s also a fabulous bar, where I get a coffee which isn’t Italian and a Portuguese custard tart, a pastéis de nata. As I pay, I bet that pastéis de nata is the plural and not the singular, and sure enough it is. I have a pastel de nata. Just the one. Not several pastéis de nata. Whoever decided to use just an ‘s’ for plurals in English was inspired.

Outside it’s crisp and cold and people are heading off the mountains. I can hear car doors slamming and cars careering down the quickening slopes. It’s when the final orange rays of the setting sun hit the tips of the peak behind me that the scene lights up with magic.

I love it here.

The colours are spectacular high above the clouds. The final few Instagram image seekers are still here. I suspect he’s taking a silhouette of her spectacular pose. She has to try several wobbly times before she nails it. I’d love to see what his photograph of her was like.

Back at my accommodation I set up my laptop to play Jackie Leven. He’s the incredibly poetic man who made some of the most ambitious and heartfelt music I’ve ever heard. Here’s an unusual piece called Old West African Song. If you’ve not discovered his albums, like Fairytales for Hard Men, Forbidden Songs of the Dying West and The Mystery of Love Is Greater Than The Mystery of Death, then I recommend them highly. Unusually, it’s not his voice on this song.

Do not seek too much fame

But do not seek obscurity

But do not remind the world of your deeds

Excel when you must

But do not excel the world

Many heroes are not yet born

Many have already died

To be alive to hear this song is a victory

“To be alive to see this sight is a victory” 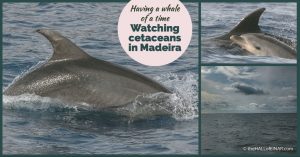 “Where the blue of the sea meets the sky”, in Madeira It's a beautiful day in Madeira. I'm heading to Calheta in the south-west of the Island; I'm staying in the… read more