Westray has two sides: a North Sea side and an Atlantic Ocean side. They meet with dramatic consequences at the northernmost and southernmost points of the Island. The Atlantic side is different and feels different. When you stand at the Bis Geos Hostel and look out you know there’s no land between you and north America. That’s a long way for waves and storms to travel.

It’s glorious weather here today on the Atlantic Ocean side: 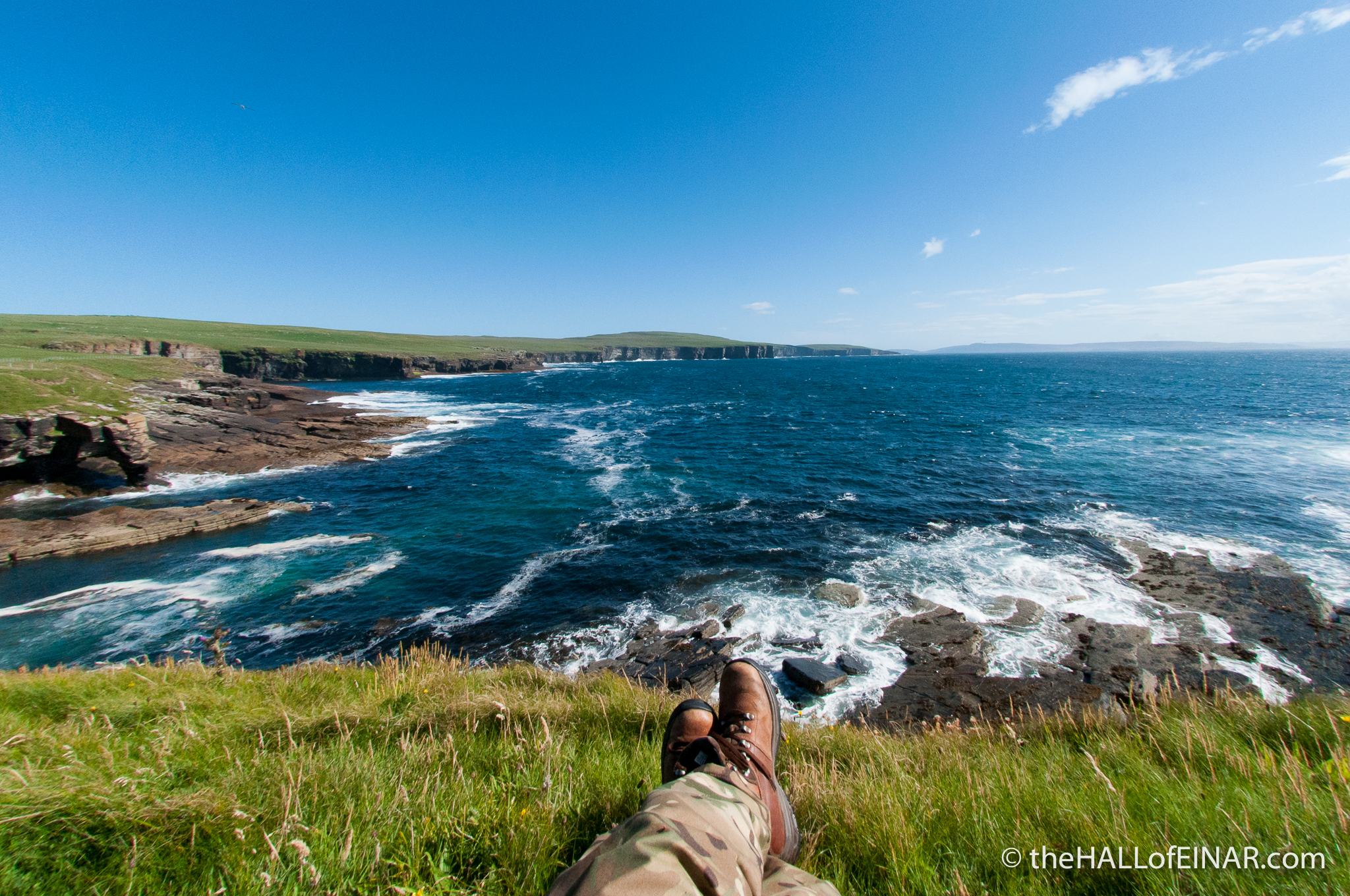 We’re as far north here on Westray as St Petersburg and Stockholm. Thankfully it’s a milder climate here because the North Atlantic Drift, a warm-water current, brings warm Gulf Stream water from the Bay of Mexico freshly to our shores. With man-made global warming and increasing global temperatures, a small change in the flows and currents will give us more unpredictable weather and increased freak weather events. There’s the potential for tens of thousands of deaths a year from heat in the Mediterranean and sea levels could rise significantly to cause floods in most world cities.

It’s easy to ignore that on a day like today: 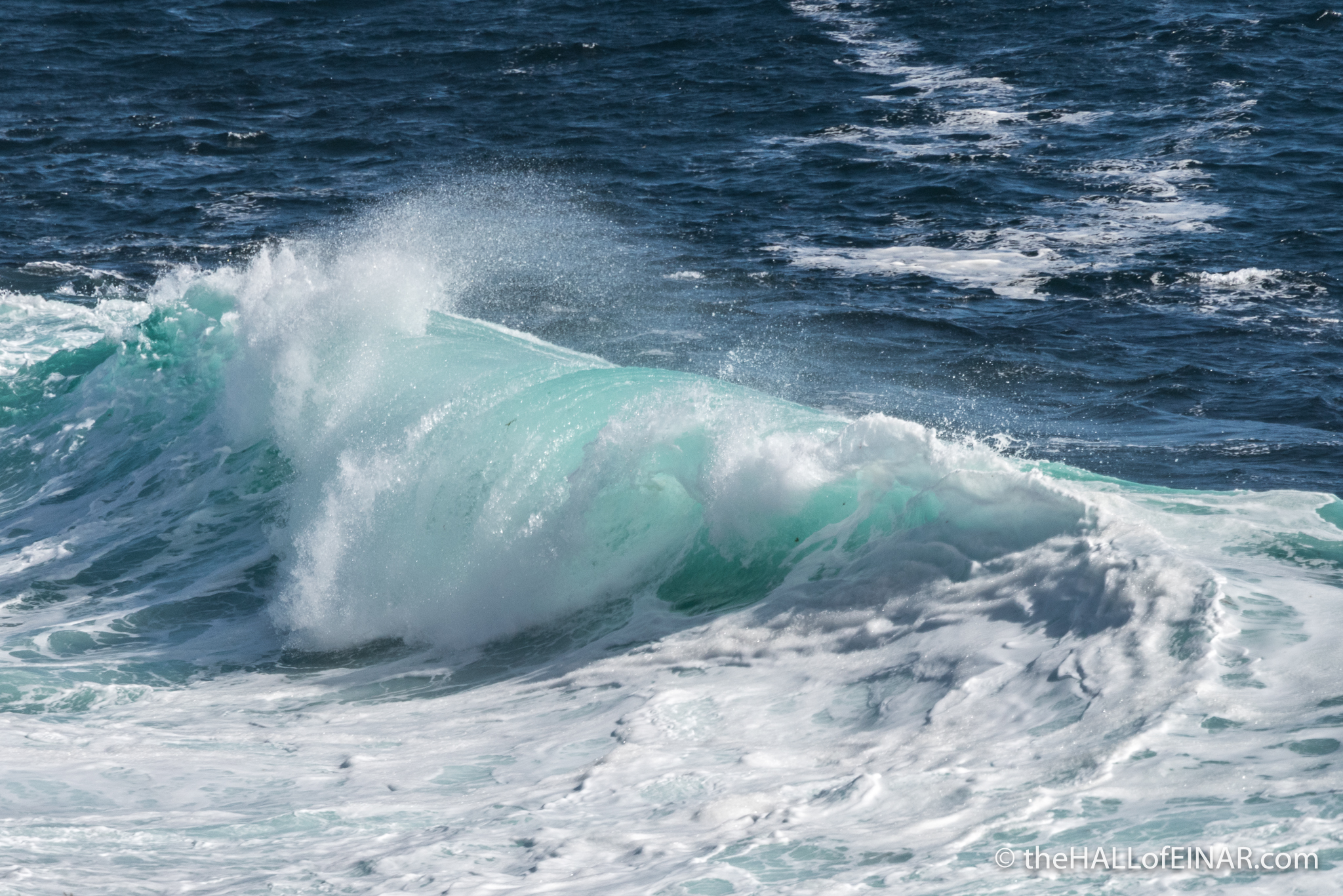 But then climate isn’t the same as weather. It’s difficult for me to understand changes in the Earth’s climate over greater times than my experience. Climate is to weather like the entire fashion industry is to the socks I put on this morning. They are definitely related, but a whole order of magnitude apart.

I love the colour of the aqua green water when you can see the sun shining through.

There’s a Shag flying over the Ocean: 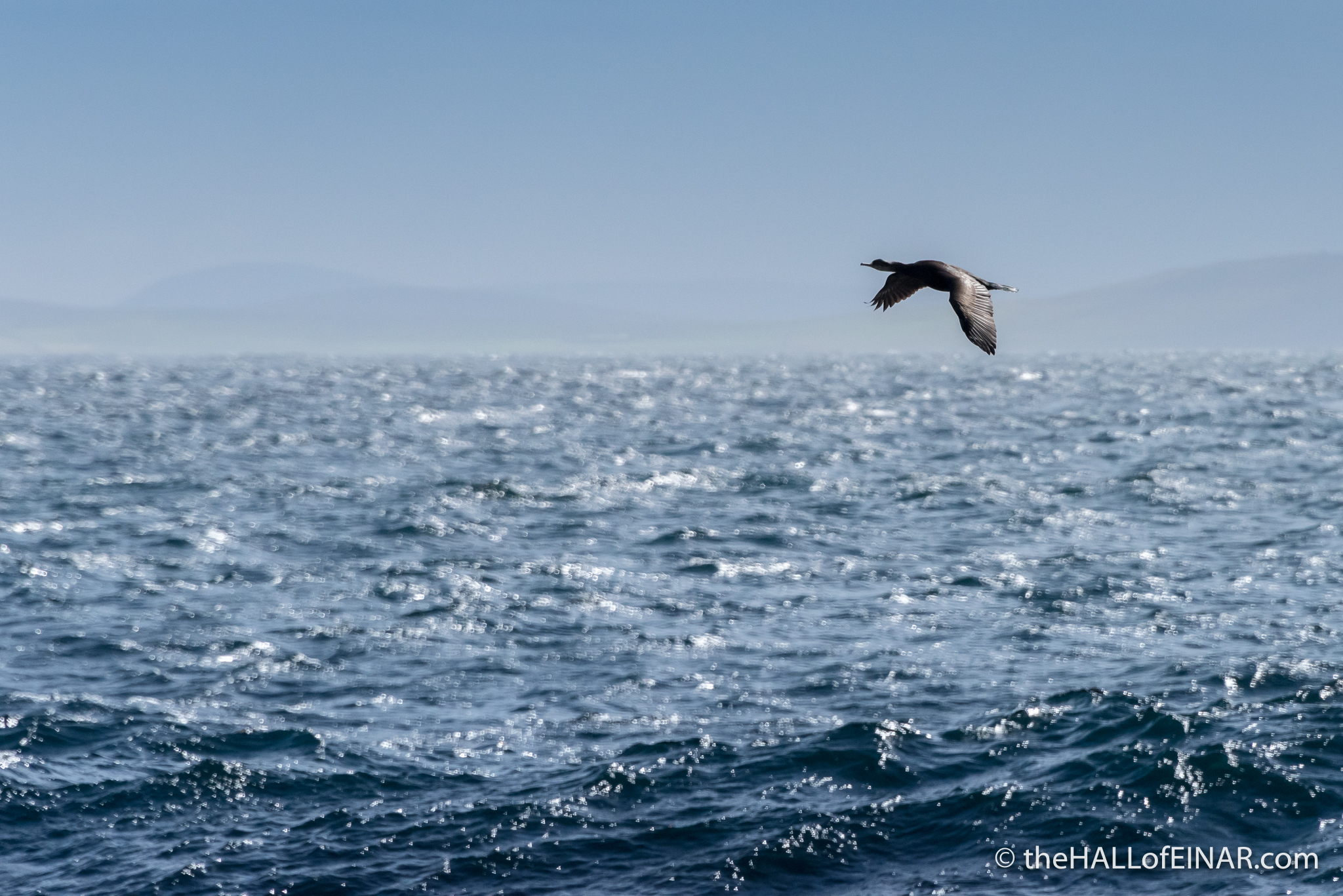 The Fulmars are flying past so close to us we can see their utterly effortless flight. They can fly up and down, into the wind and against the wind without even twitching their wings to flap. 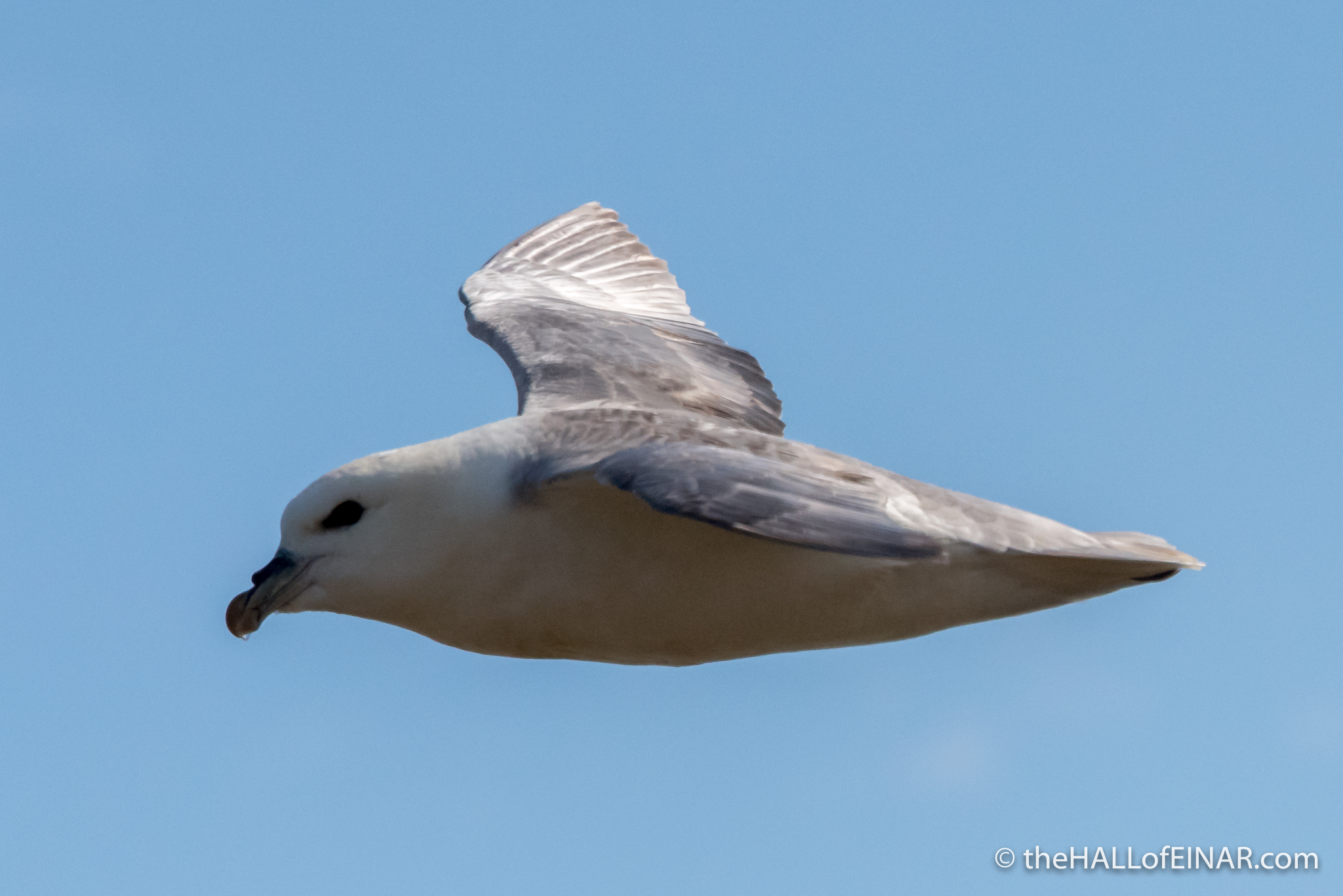 There’s a Fulmar Chick on the rocks. It’s yet to experience that freewheeling freedom: 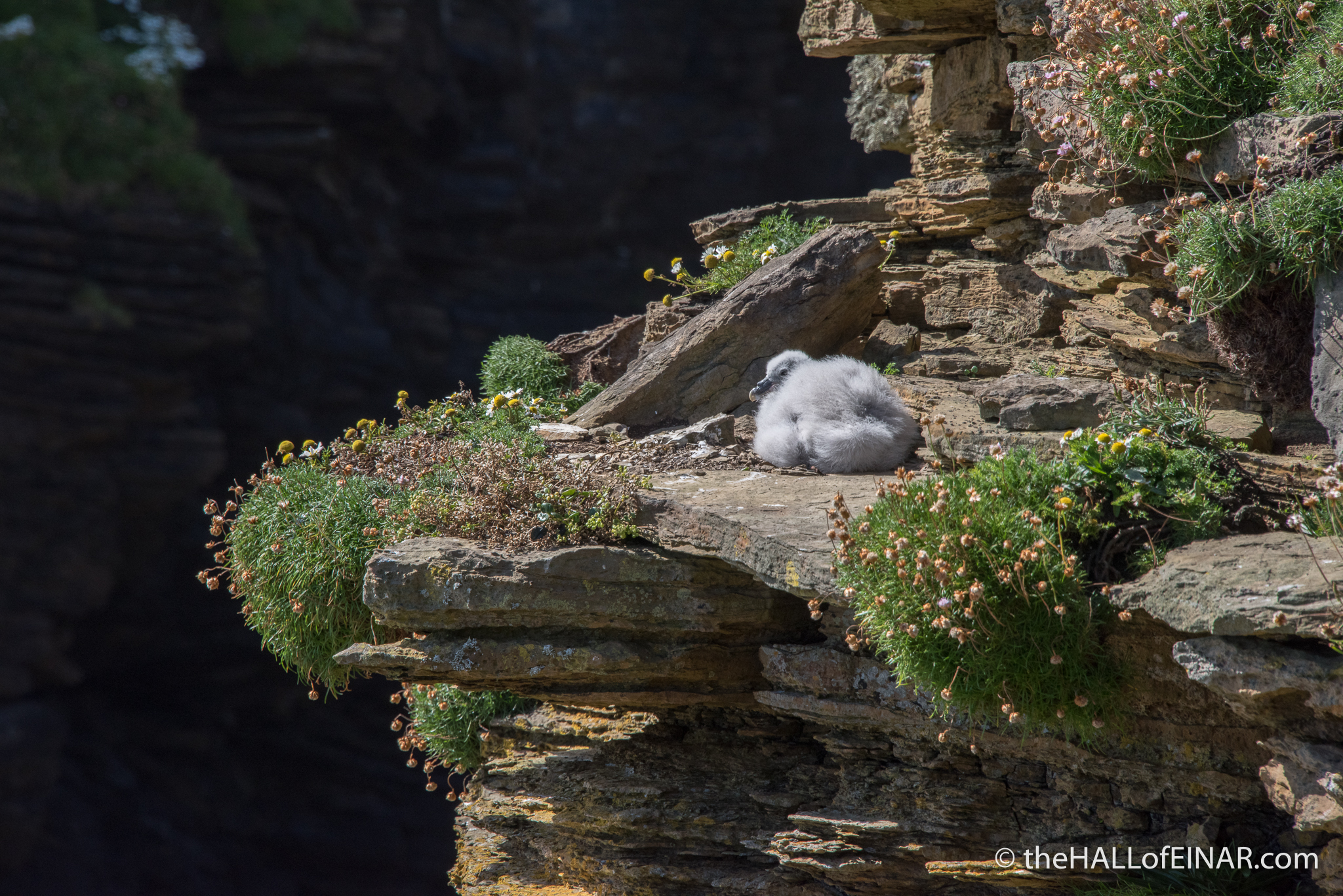 The nearest I’ll ever get to the experience is riding my bicycle.

I’ve photographed Fulmar chicks before. They are unbelievably cute:

A Herring Gull is calling insistently above us: 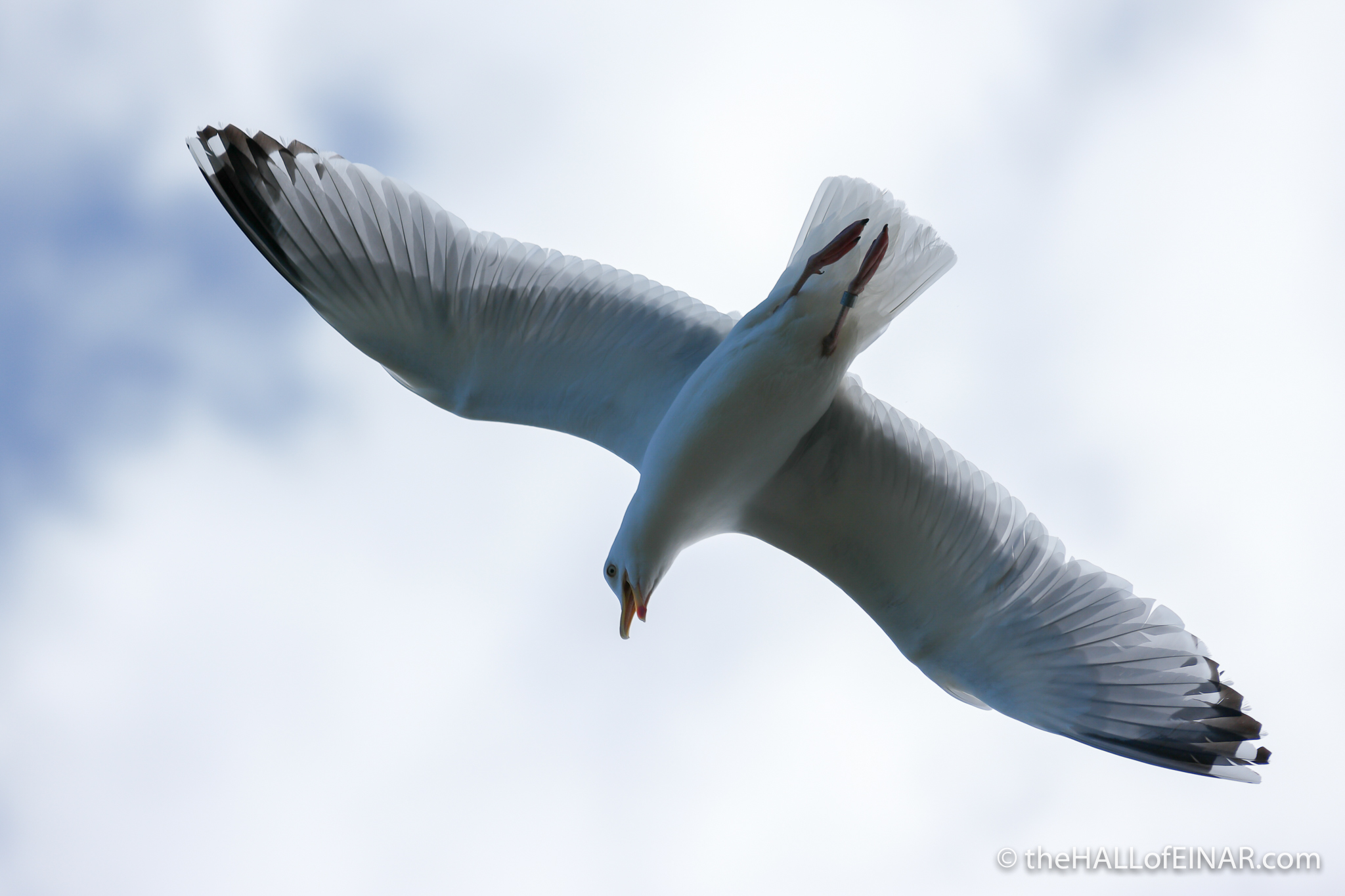 It’s noisy and flapping to stay still above us. I look around and finally see a chick huddled on the edge of the cliff: 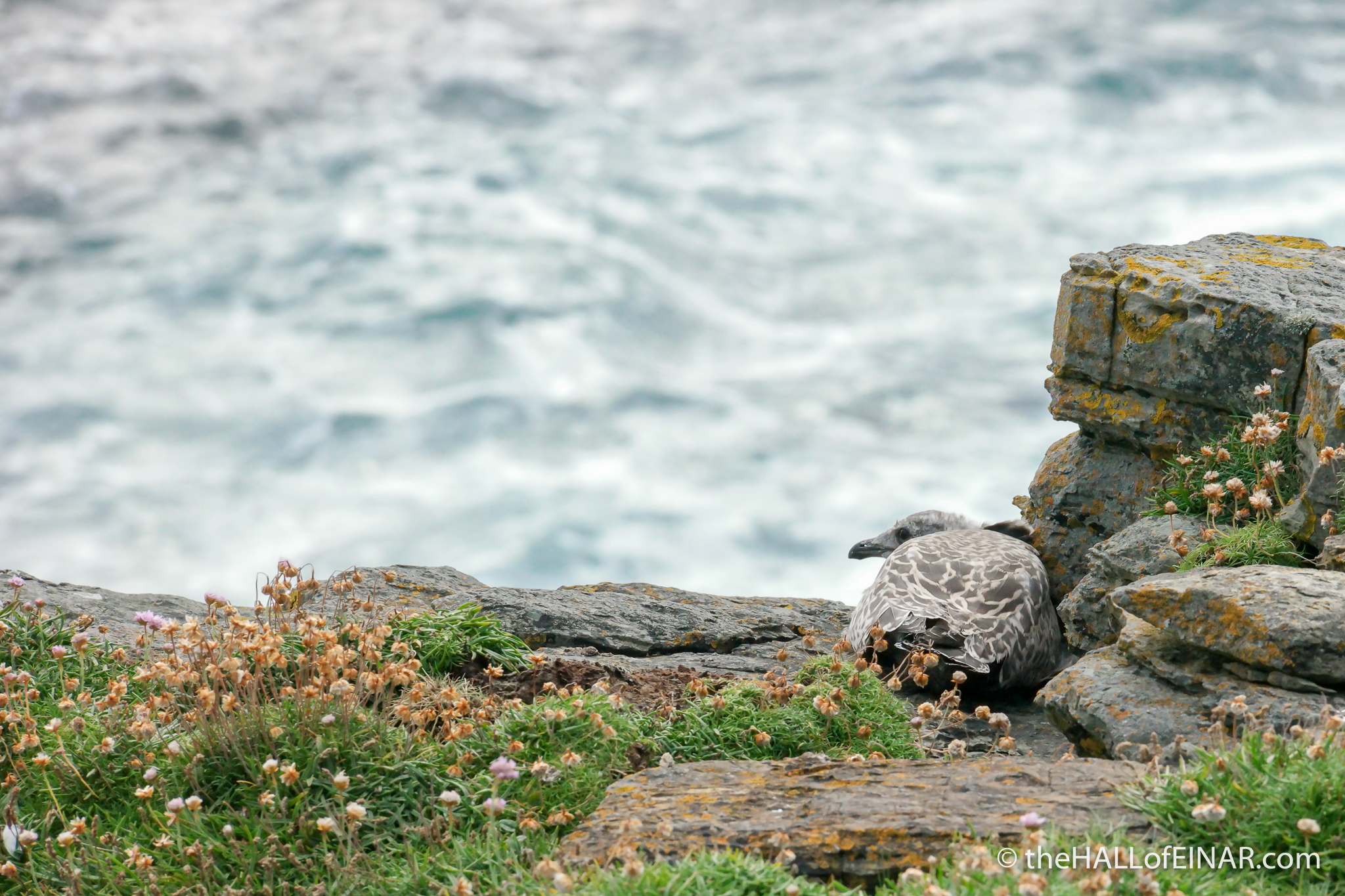 We move on so we don’t disturb them.

Further along the coast is a Black Guillemot. 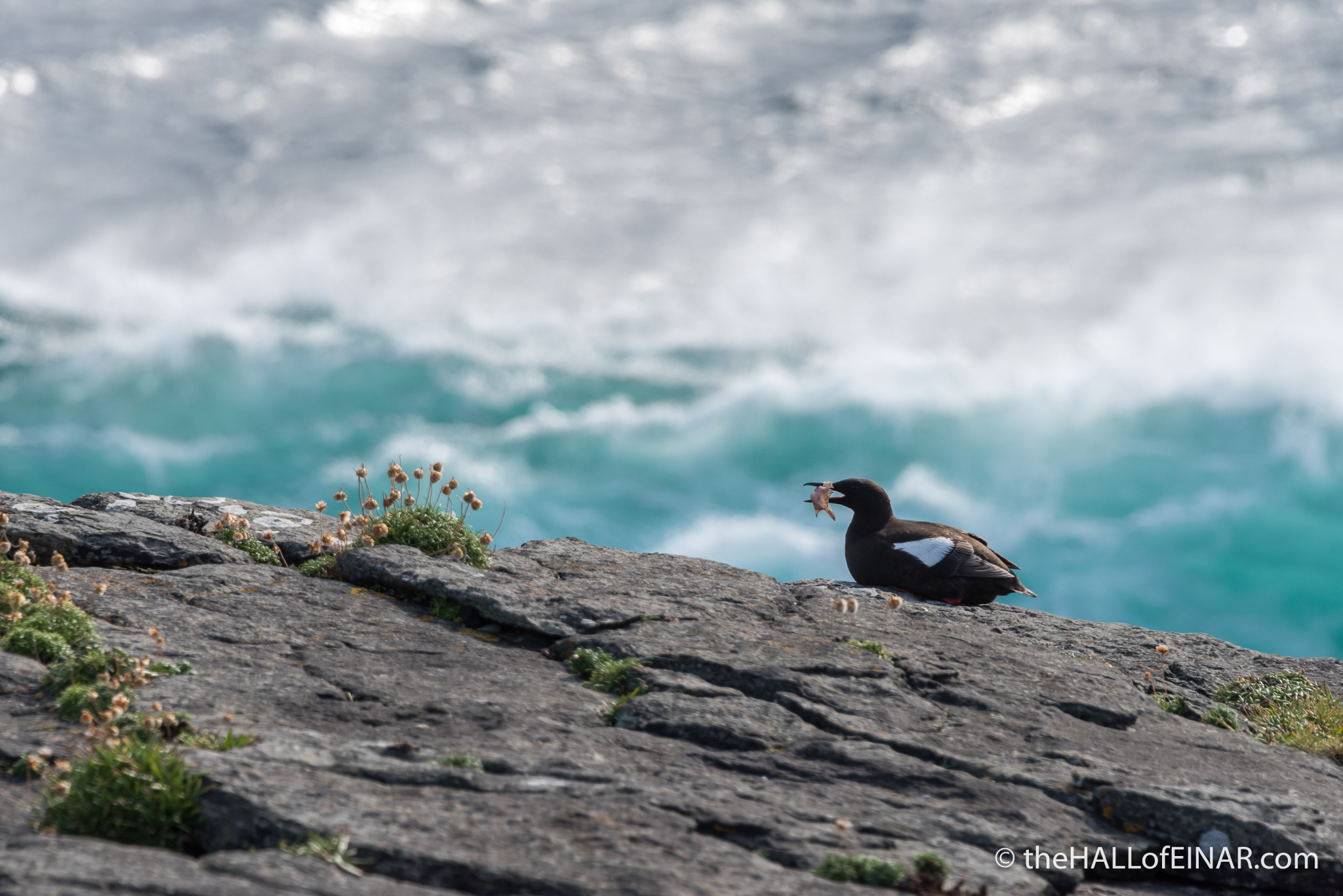 It’s caught a Norwegian Topknot and is looking very pleased with itself: 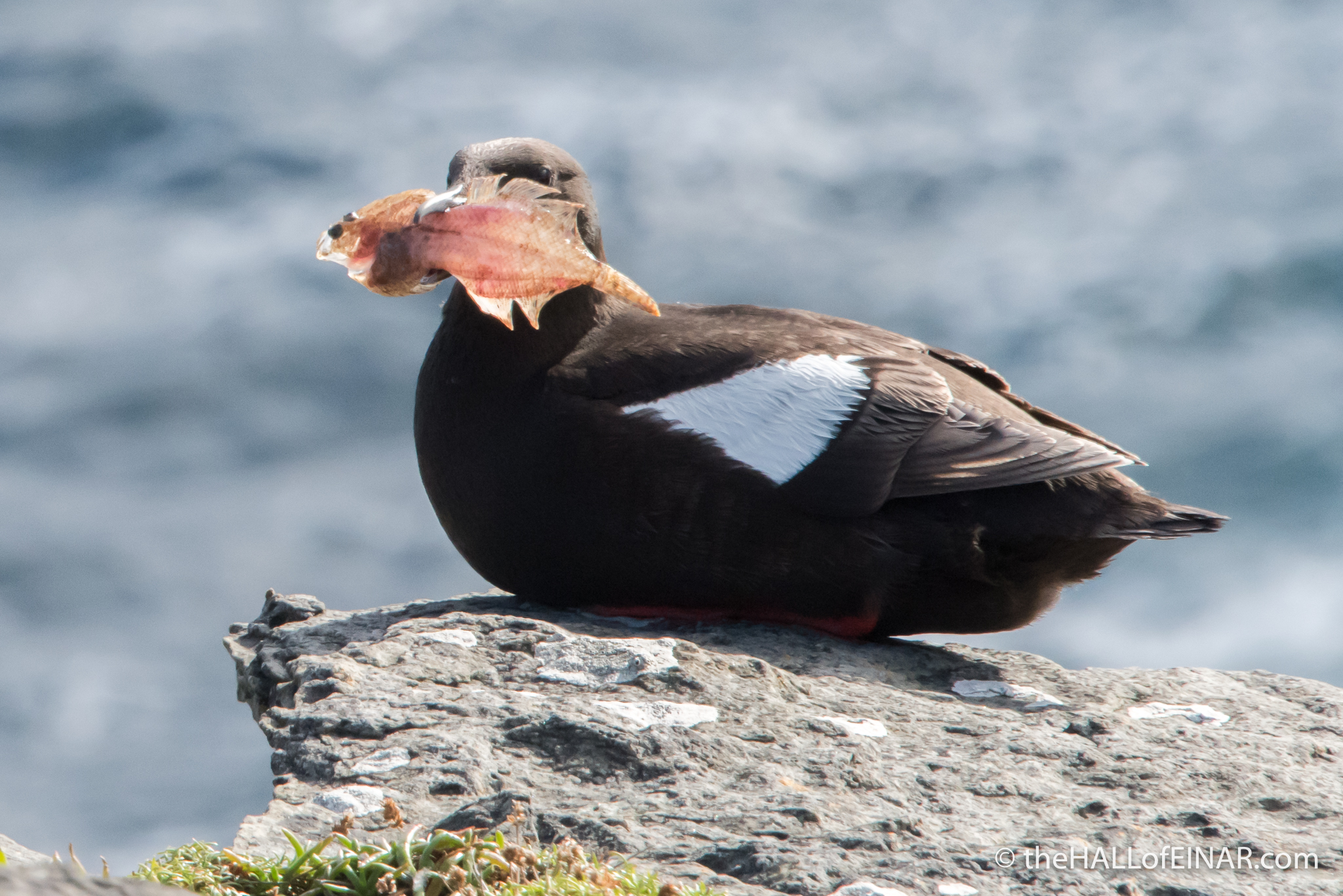 I’ve photographed them catching Topknots before, and the wonderful looking Butterfish:

A Tystie and a Topknot

It might be waiting until it’s not observed to go to its chick to feed it, so it’s time to move on up the coast again.

One of the most enigmatic birds of the coast is the Great Skua. They hunt up and down the coastline. Everytime I see one I, inwardly, re-run the theme tune to the film Jaws. Skuas are the embodiment of predatory birds. They seem like the Buzzards of the oceans.

There’s something about their dark plumage which makes it very difficult to see them until they are upon you. Every photograph I have of a Great Skua is from behind as it disappears into the distance. This time I catch a flypast: 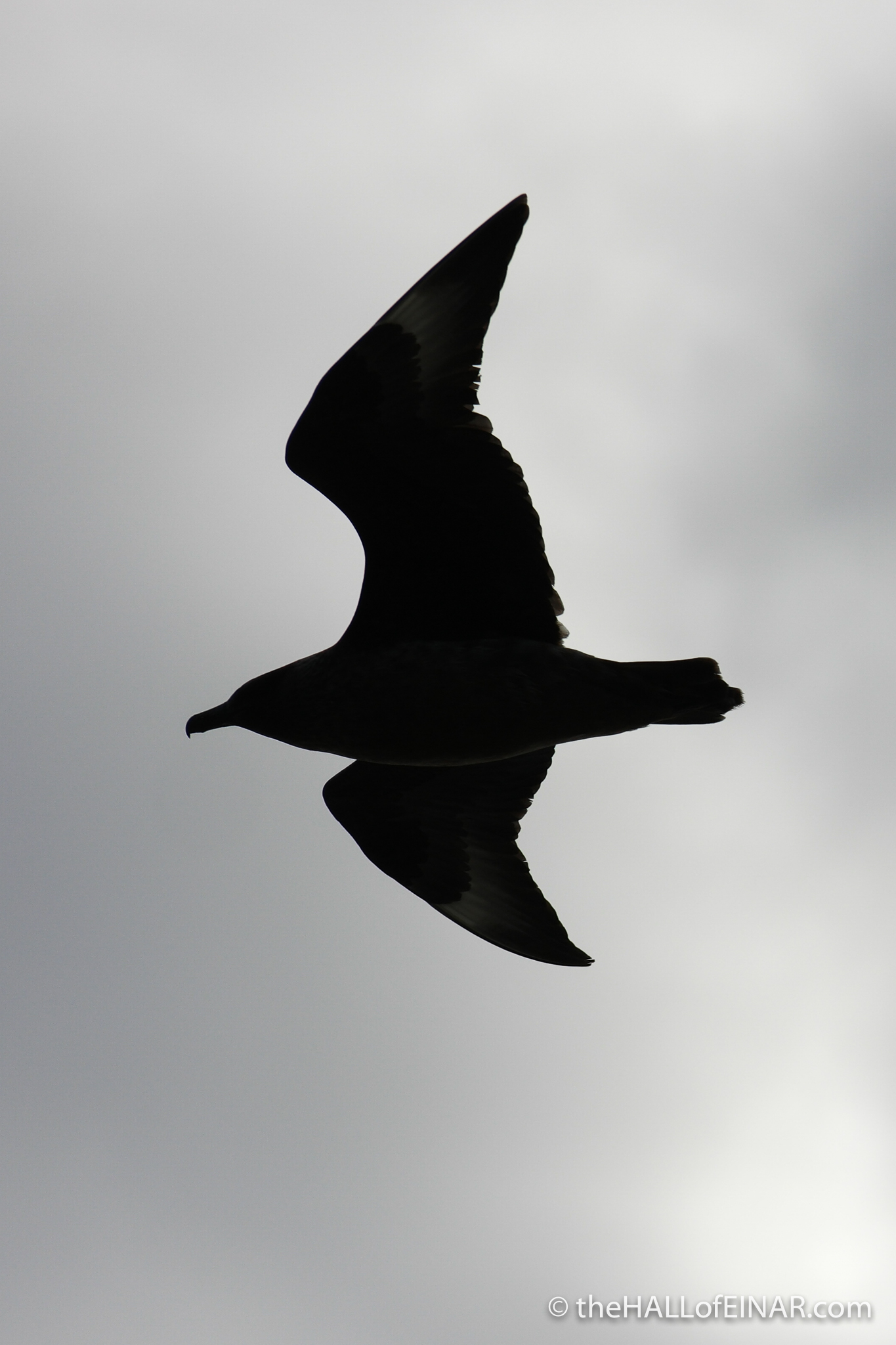 This is a colour photograph. It just goes to prove how dramatic and menacing they are. Just like the consequences of climate change. And just like a Great Skua it’ll be upon us before we know it.