It’s been an emotional journey over the last few days with the birds here at Einar. We always have Swallows and Blackbirds who make their nests in the outbuildings. It seems almost every house in Westray has an outbuilding bigger than the house itself. ‘A large selection of outbuildings suitable for a variety of uses’ is what the agents’ particulars say about houses on Westray. The most suitable use for my outbuildings is as birds’ nesting. In addition to Swallows and Blackbirds this year we have a pair of Wrens who have raised two chicks. Wrens have been favourites of mine since I was a child and drew them with pencil and pencil crayons over 40 years ago:

I was 12 years old then. I remember being very excited about my drawings and showing them to my grandad. “Art’s all very well,” he said, “But you won’t make a living out of it.”

I can see one of the Wrens from a distance on the stone walls which surround the house. It’s a warm bundle of beautiful cuteness. 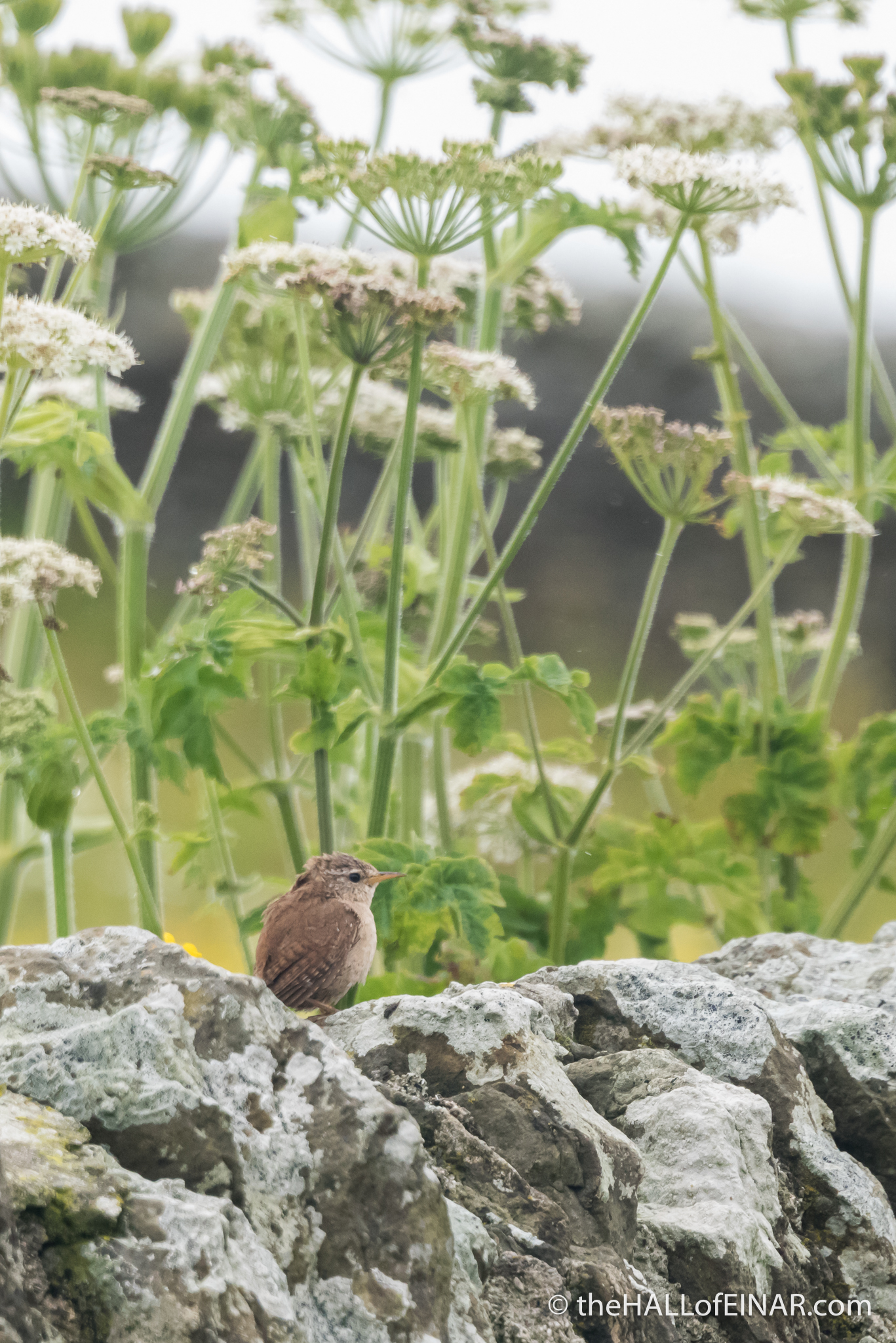 I look at the busy parents gathering food for the fledgelings with total admiration. There are two fledgelings which have left the nest and separated to avoid predation. It must be exhausting for the parents to find enough food for four and to keep their family safe. They call incessantly to the chicks who call back. Then I notice that one of the parents appears to be completely bald. I can see its scalp. It has no head feathers at all. I look at its ruffled tail and wonder whether it has some tail feathers missing. Then I notice it only has one foot and its damaged leg looks to have been broken. It’s carrying on just as normal, as if nothing has happened; raising a family and snatching a precious moment to preen itself. 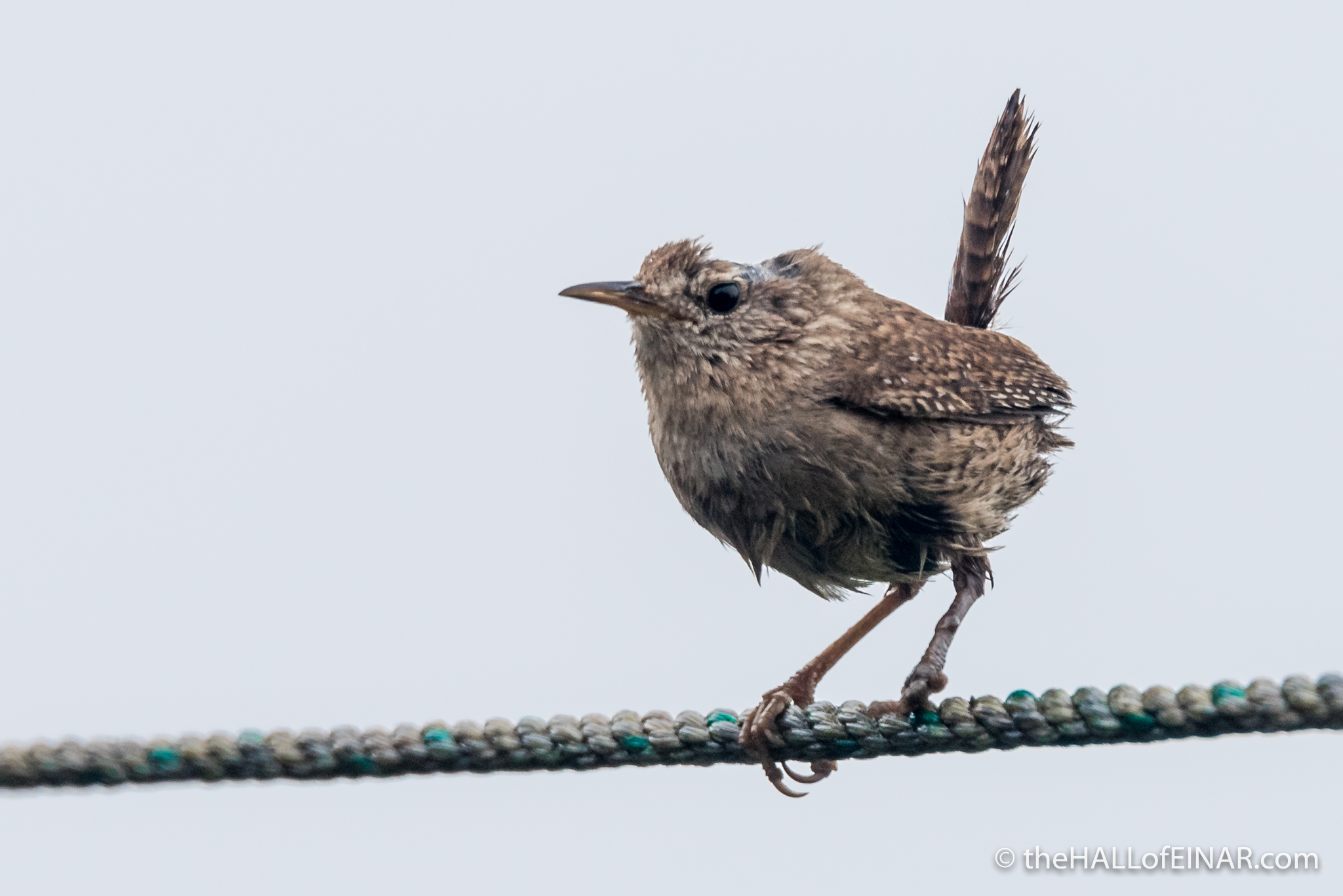 What an amazing bird. It’s so incredibly busy and, of course, loud. There must be a law which says the volume of a bird’s call is inverse to its size.

I wonder what’s happened to it. 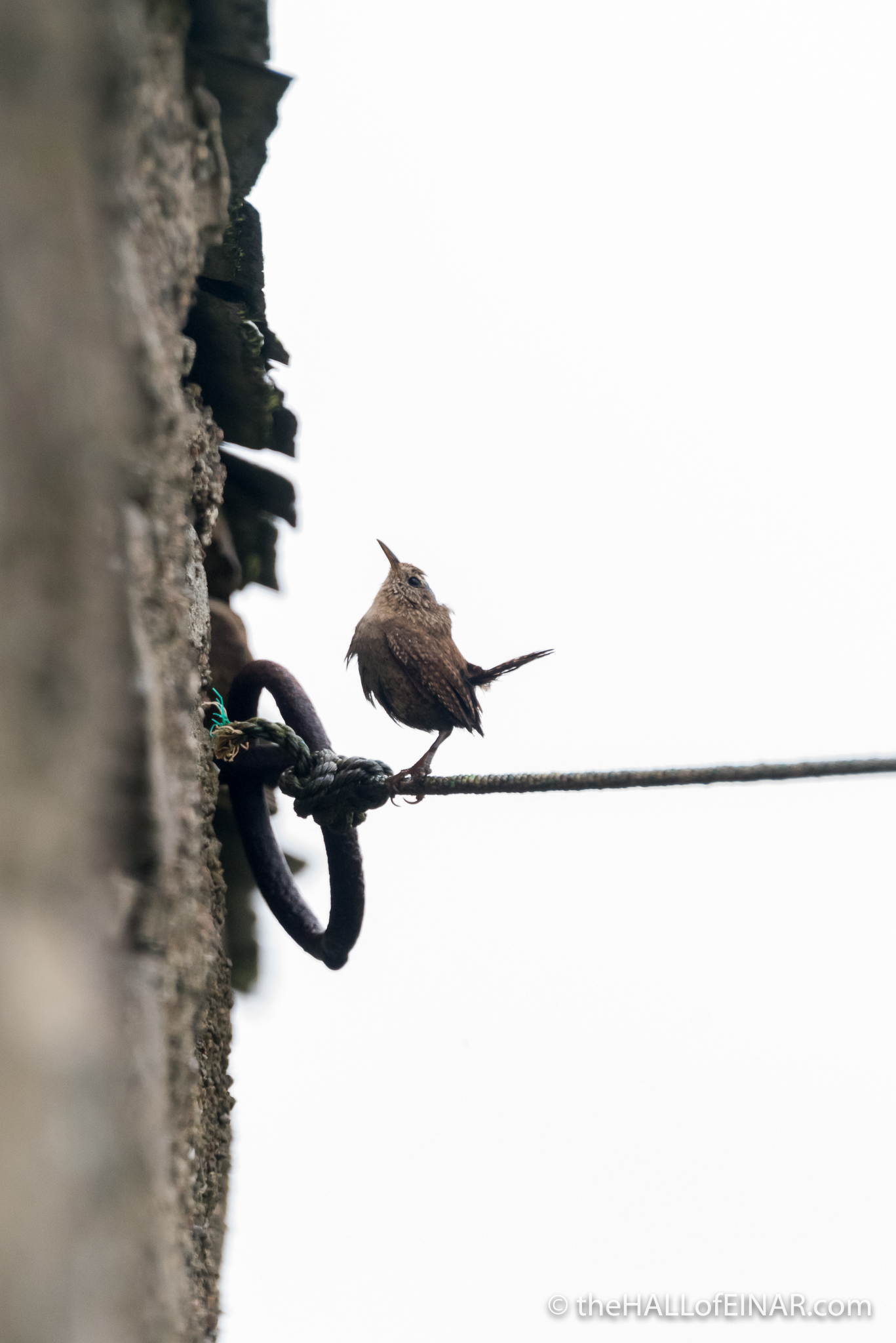 It certainly hasn’t dampened its attitude.

One of the chicks is hanging onto the rough render on the house wall. 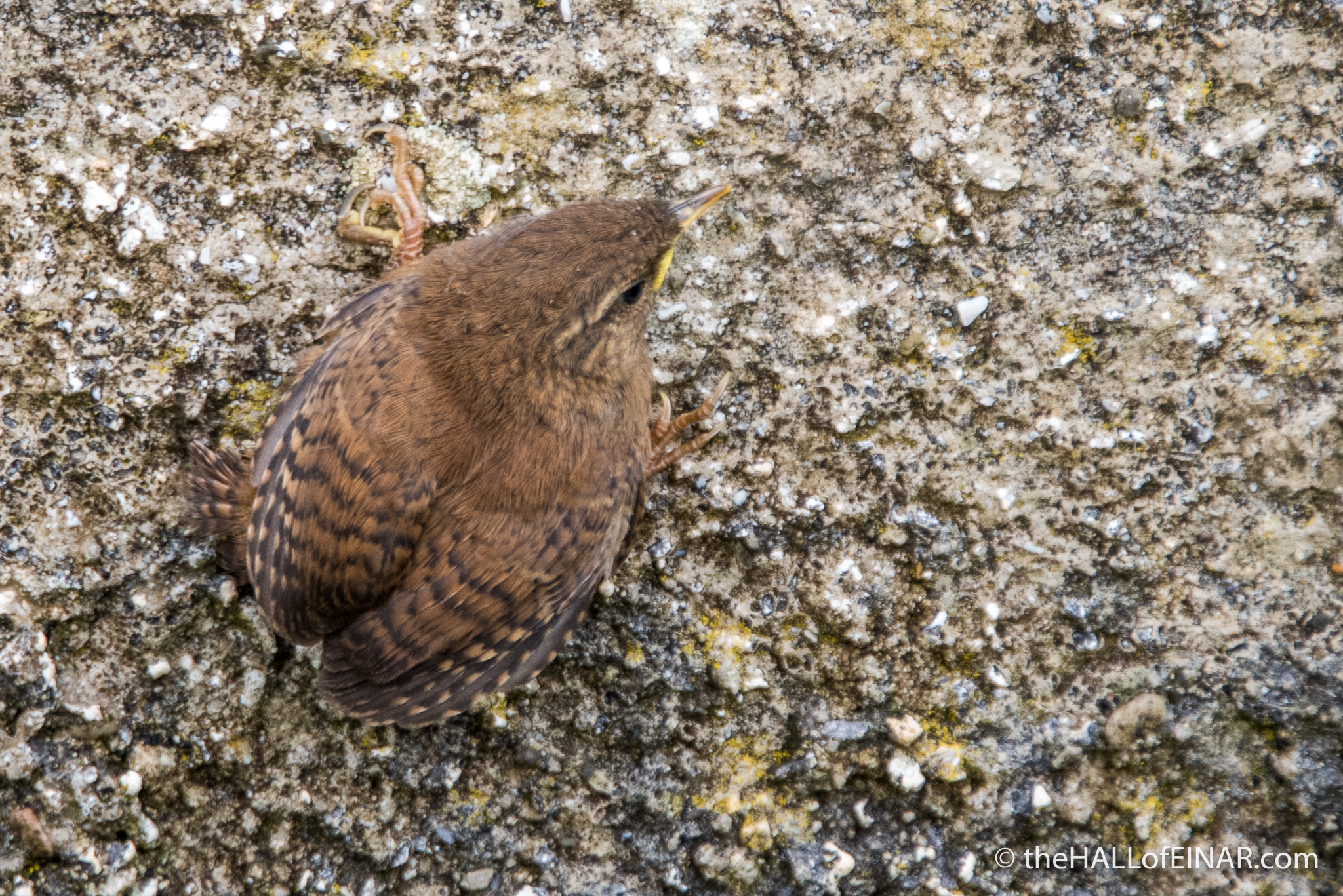 The Wren is sometimes called a “kinglet”. There’s an ancient fable about the election of the King of Birds where the bird that could fly the highest would be made King. The eagle outflew all other birds, but he was beaten by a small bird that had hidden in his plumage, rode on his shoulders and outflew even the eagle.

This Wren is truly a kinglet among birds.

I’m amazed the injured adult has been able to carry on. I tell my friend Yvonne all about it and she looks at me and says, “Well nobody’s told it that it can’t!” She’s had decades of experience working with people with learning disabilities and she says it with real meaning. 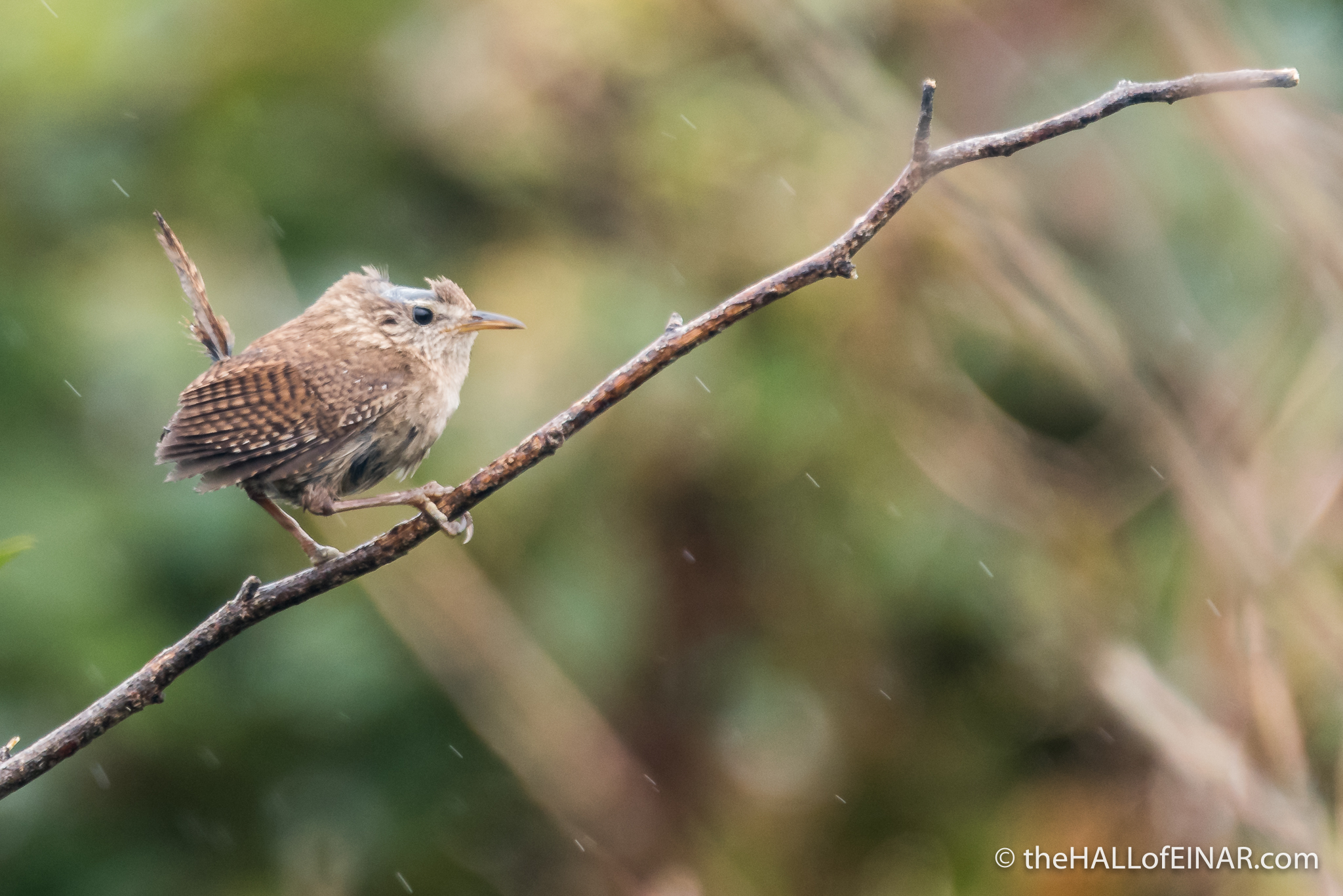 I wonder what we could all achieve if we were never told that we couldn’t.

10 Responses to "The Wren who hasn’t been told"