A Puffin’s dinner is an Arctic Skua’s dinner.

Arctic Skuas are hunting Puffins for their fish on Westray and they’re having intermittent success. The action starts in the evening as a first Arctic Skua arrives and circles, looking for the tell-tale glint of silver fish in a returning Puffin’s beak. I could tell this one had spotted a Puffin Deliveroo delivery as it dropped its wings and started flying directly, hard and low, out towards a Puffin. I didn’t know it was a Puffin at the time, as it was still several hundred metres away. That suggests Arctic Skuas have acute eyesight, since it could see there were fish in the beak of a bird I couldn’t see at all.

There’s a spectacular aerial display as the Puffins attempt avoidance behaviour and fly as fast as they possibly can to their burrows. A hungry puffling is waiting for them and they have invested considerable time and energy fishing fo their catch.

The light is getting dim and yet the Puffins keep coming with their catch and the Arctic Skua keeps chasing them. Sometimes the Puffins drops it catch and sometimes it escapes. It reminds me of playing the brutal, and subsequently banned, game British Bulldog in the playground. Sometimes the chase is low over the water:

And sometimes the chase is high in the air:

Life; it’s brutal out there. 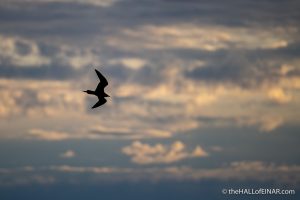 One Arctic Skua evening Arctic Skuas are one of my favourite birds. Their swept-back wings, hooked beaks and pointed tail feathers make a distinctive… read more 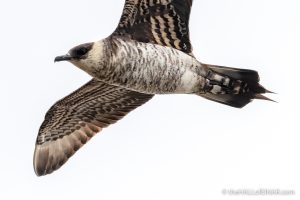 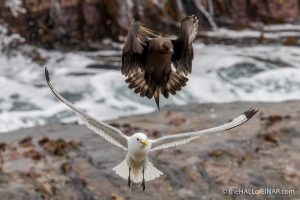 Arctic Skua attacking a Kittiwake I've seen Great Skuas attacking juvenile Kittiwakes on Westray. They pluck them out of the air and peck them to… read more 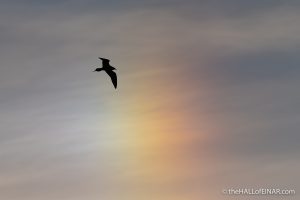 Sundogs and Skuas There's an Arctic Skua hunting Puffins for their fish. The weather is stunning, with interesting clouds making rainbow sundogs either… read more 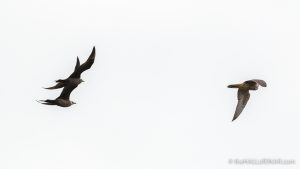 Juvenile Peregrine pursued by Arctic Skuas I hear a loud Keeeeoww; a scream coming from above me. I manage to get its source in my viewfinder.… read more 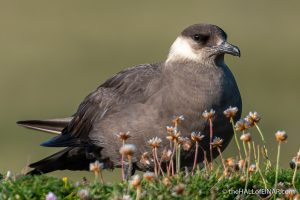 The Arctic Skua family The Arctic Skuas on the Westside have a chick. It appears to be bigger than they are. It's easy to… read more