We’re exploring the scrub and woodland verges and fields of an abandoned farmhouse in Apulia in the south of Italy. We shouldn’t be here; it’s private land, but there’s so much enjoyment to be had; and no-one to enjoy it. It’s calling to us as we abandon the car on a farm track that ends in long grass. This place has secrets to tell, and it needs an audience. We have stumbled into it, blinking and unwary, in the middle of its performance.

I swap sandals for boots and set off across the field boundary. It’s then that a strange apparition stops me. I’m overwhelmed with a feeling of dislocation, just like I was when walking in Australia. There, I saw strange trees, strange fruits, strange animals; all somehow wrong. There were Canonball Trees with huge fruits growing from their trunks, there were massive crested lizards in parks, there were poisonous snakes swimming in the sea. All the wildlife there seemed at once familiar and yet alien. The noises of the birds seemed strange. Everything was the wrong shape or the wrong colour, the wrong size or the wrong sound. Wrong, wrong, wrong.

In front of me is a small insect, only a few centimetres long. I remember the Edwin Muir poem The Combat and the lines:

“Body of leopard, eagle’s head
And whetted beak, and lion’s mane,
And frost-grey hedge of feathers spread
Behind – he seemed of all things bred.
I shall not see his like again.”

There’s a strange sensation as I mouth “He seemed of all things bred,” because the creature in front of me is… something of everything. It’s as if the three witches in Macbeth have spoken their spells over a steaming cauldron and have added:

“Body of hornet,
Wings of dragonfly,
Antennae of butterfly,
Tail of…”

What is that tail? It’s like a black horseshoe; a lucky charm. Earwig, that’s what its tail is like.

“What on Earth is that?” I say, straining my mouth in that way that you do to shout, but to shout behind you. 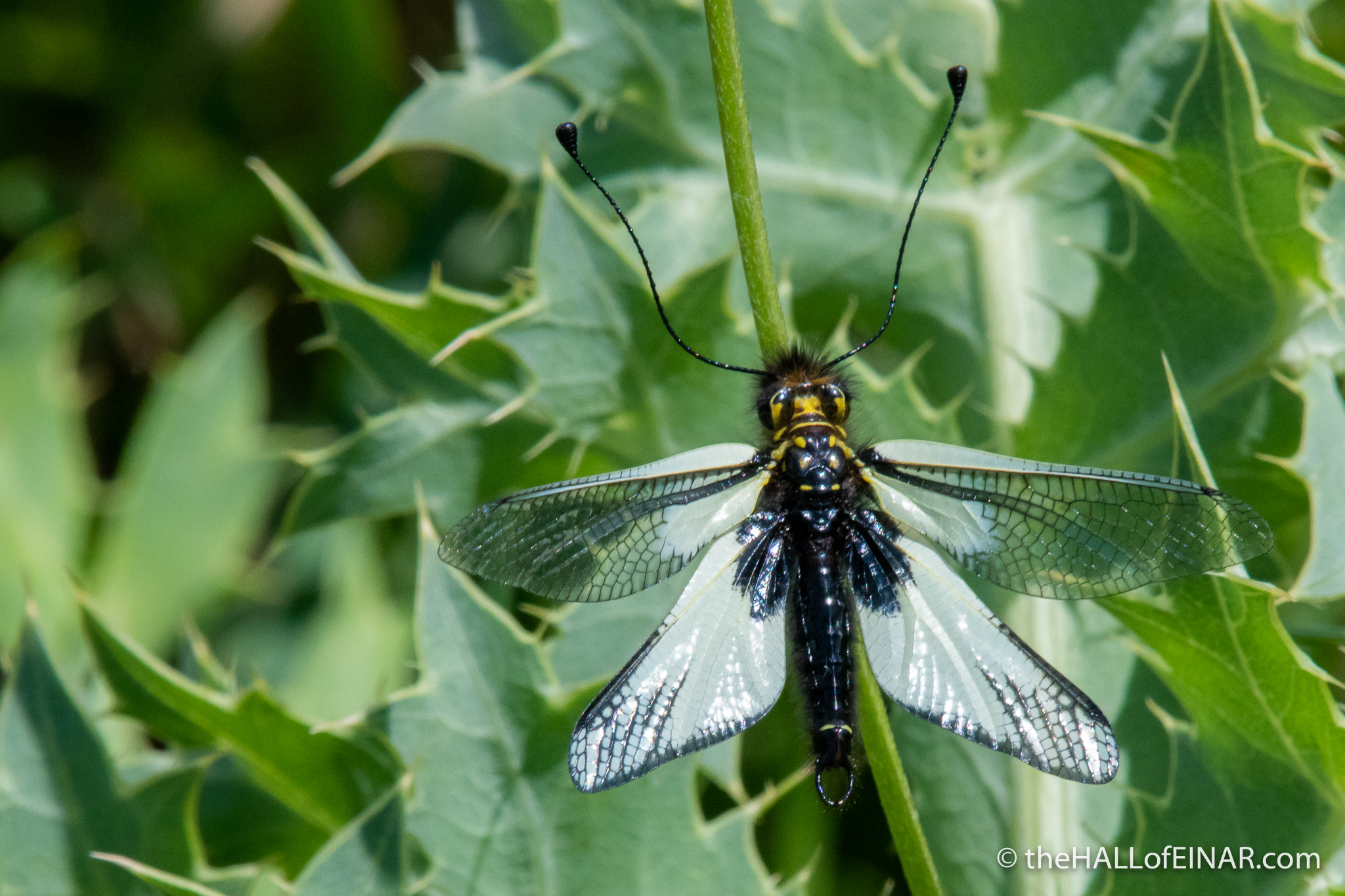 It has glossy wings, shining like a white plastic bag. It has a hairy punk hairstyle. It has antennae like the handlebars of a Raleigh Chopper bicycle from the 1970s with strange, black, heart-shaped helium balloons on their ends. 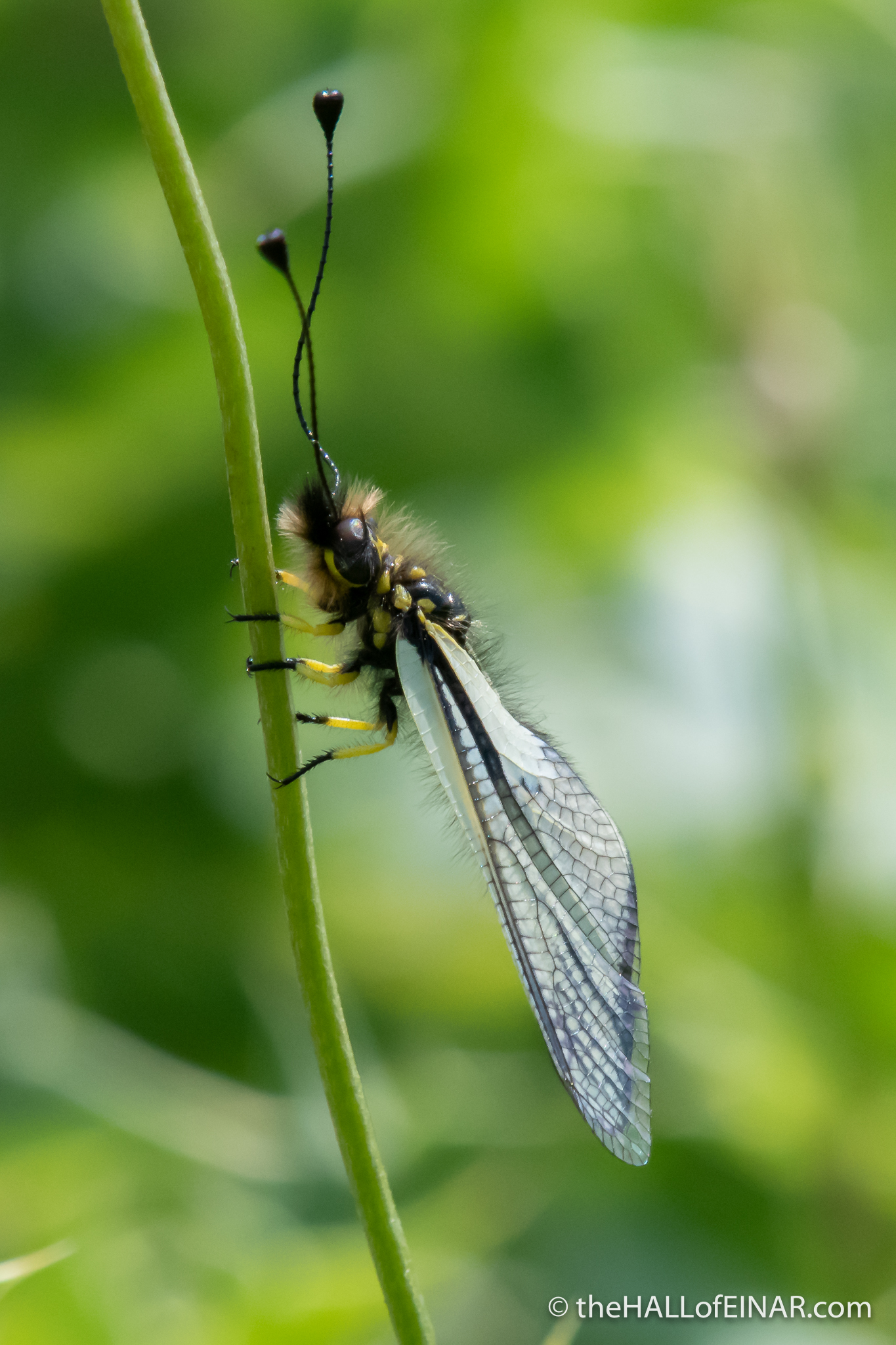 It has yellow and black legs with grappling irons where the feet should be.

It’s ‘trying’ so hard to appear as if it’s a dragonfly but failing; dragonflies don’t have long clubbed antennae like that, even though the transparent wings with their network of veins and its stance look just like a dragonfly’s. It’s not a day-flying moth either; moths have feathery antennae, and they don’t have bulging eyes that take up half their heads. I’m stumped.

Back home I ask for help and the answer comes back, “Owlfly”. What a perfect name for a creature created in a witch’s cauldron. Owlflies are aerial predators with incredible vision. They can see using ultra-violet light and hunt on the wing by spotting small flying insects at great distances. Their mimicry of dragonflies probably protects them from predators which would avoid the real thing.

Later in the day we see more. There are blue ones and yellow ones:

The yellow one is the colour of lemon sherbet. It’s probably Libelloides coccajus, the Owly Sulphur. The white one? Maybe it’s Libelloides lacteus, which appears not to have an English name. I think I’ll call it the Milky Owl. The blue one? I don’t know.

They are Neuropterans, like the green Lacewings I remember seeing as a child. 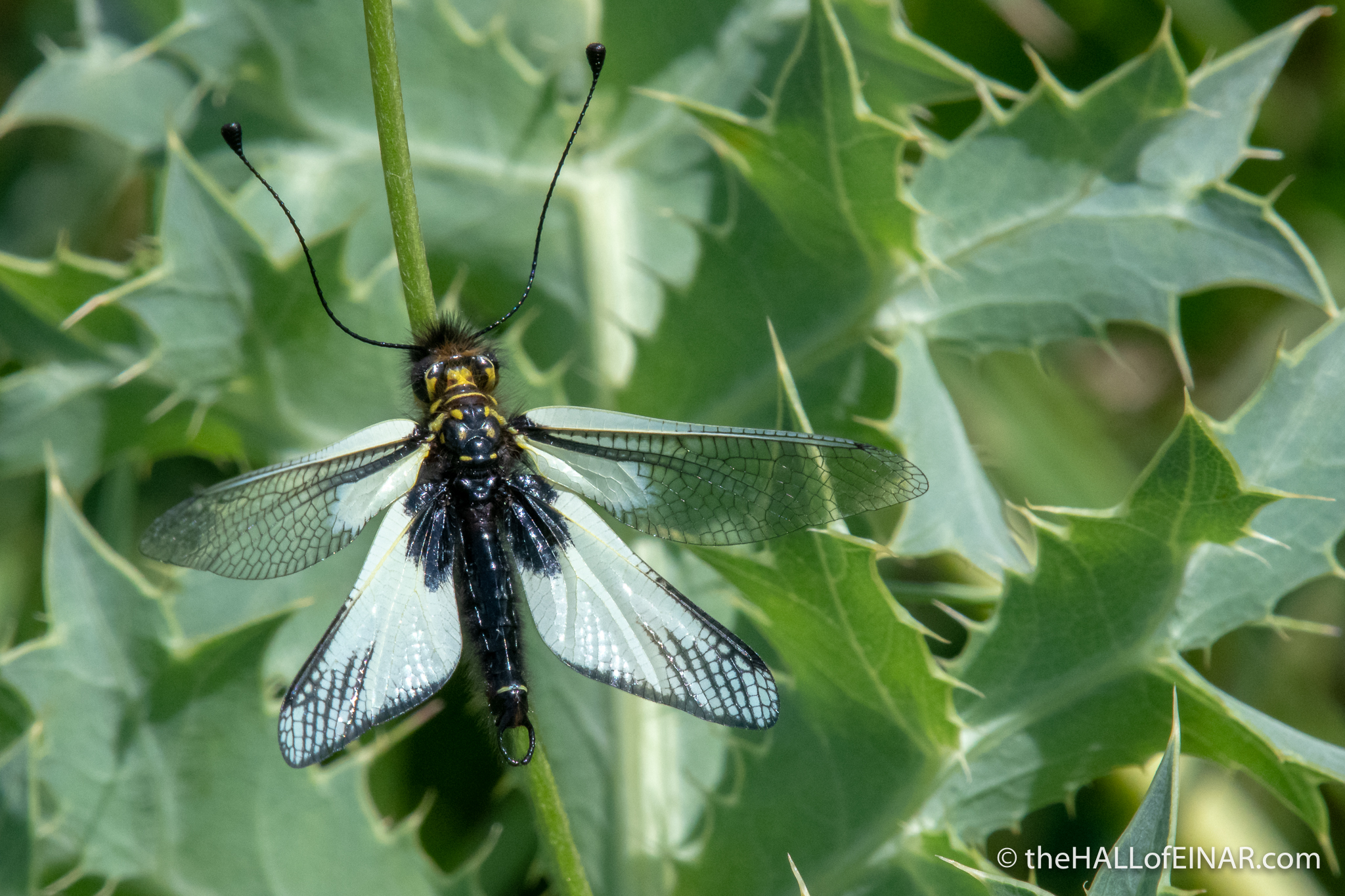 “Body of hornet,
Wings of dragonfly,
Antennae of butterfly,
Tail of earwig”