I was enjoying some local exercise at Newton Abbot Town Quay, when I spotted a Black-Headed Gull with a ring on its leg. It landed so close to me that I could read the black code on the white plastic ring. It said J1P4. Back home I searched for any clue to its identity and found the scientists running a Black-Headed Gull leg-ringing study. I dropped them a line and was thrilled to get a reply from Norway, from Nils Helge Lorentzen, who sent me a copy of their records for this bird. They showed 56 sightings of J1P4 dating back to 2011. J1P4 has spent the last eleven years travelling backwards and forwards from Norway to South Devon. It spends October to March in the relative warmth of the lake at Decoy Country Park and from April to September it’s in Frognerparken in Norway, for the breeding season.

You might think that Black-Headed Gulls are seagulls but they are actually freshwater gulls. They used to be a rare sight inland 100 years ago but according to the RSPB there are now 140,000 breeding pairs in the UK. During the winter millions of them come to the UK. They flock here from Russia, Scandinavia and the Baltic States and their population swells to 2.2 million individuals. I know it’s cold in Devon at the moment, but it’s not as cold as Norway. The breeding population of Black-Headed Gulls is still growing in the UK but their winter numbers have fallen by over 30 per cent in the last 25 years. They are an Amber- Listed bird of conservation concern.

Despite their name Black-Headed Gulls don’t have black heads; they have chocolate-brown heads during the breeding season and white heads with a dark dot behind the eye outside of the breeding season. They eat insects, worms, plants and leftover human food and are often noisy squabblers. You might find them in your garden arguing over a crust of bread.

Look out for one with a ring on its leg. It could have come all the way from Norway. 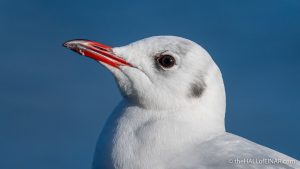 1380 kilometres from home We amble down to Newton Abbot Quay. There's a raucous squabble under the bridge as Black Headed Gulls compete for… read more 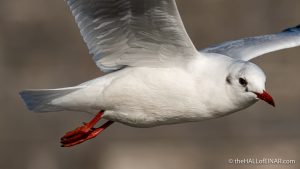 J1P4 Before Instagram was a thing I used to crop many of my photographs square. I do love the balanced composition… read more