We’ve been spotted. There’s a Great Spotted Woodpecker living its adventurous life nearby.

Great Spotted Woodpeckers are large woodpeckers to us. They’re actually only medium sized woodpeckers, it’s just we don’t have any of the large ones in the UK.

Great Spotted Woodpeckers are found right across Europe and Asia. They obey Bergmann’s rule that animals become larger and fatter the colder the climate. I clearly don’t obey Bergmann’s rule; I become fatter in Italy because of the availability of pizza and pasta, irrespective of the temperature.

They also become bigger billed and whiter underneath there further north they live. Woodpeckers, that is. I wonder if these Italian Great Spotted Woodpeckers are smaller, given it’s 18 degrees Celsius here in Italy in November and I’m about to go back to heavy sleet showers in Devon.

Great Spotted Woodpeckers eat pine seeds, which puts them in direct competition with me, since I fancy gnocchi with basil pesto later. It takes ages to collect the fallen pine cones and extract the seeds and then hit them with a hammer. Thankfully I can just buy a kilogram of Siberian ones for £24.99 and other people can do all that work for me. 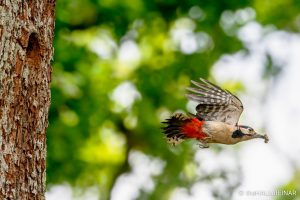 That elusive flight shot We discovered a Great Spotted Woodpecker, Dendrocopos major, nest recently. It wasn't the obvious hole in the side of the tree which did it, it was the insistent noise from the chicks which made it blindingly obvious. Here's the male bringing in food to the nest. It's an opportunity to… read more