“Is organic food any better for you?”, people ask, as if that’s the only worthwhile question to ask. A follow up question might be “Yes, but is organic food worth paying the premium for?”

Soil. It’s a deeply unromantic subject to many. It’s just dirt, after all, isn’t it? Yet without it life on land would be impossible. We disrespect soil at our peril. It can take 200 to 400 years to form a single centimetre of topsoil in mild climates. It can take up to 3,000 years to create a soil rich enough in nutrients to support complex life sustainably. Take a look at the Earth from space and you can see where our soils are heading; they are being eroded, leached away and swept down rivers and deposited in large brown sediment banks in the sea. Ploughing, agricultural runoff and riverbank erosion all contribute to losing one of our most important natural resources.

Artificial fertilisers are produced from gas from oil and gas drilling and from the mining of potash and phosphate deposits. As Fertilizers Europe say, “the European fertilizer industry transforms millions of tons of air, natural gas and mined ores into products based on the three essential plant nutrients nitrogen, phosphorus and potassium.” Their vision is one of satellite technology, more professional farmers, huge agribusinesses, nutrient efficiency, precision application tools and increased intensity of agriculture.

Artificial pesticides can be a major threat to human health and the natural world. The World Health Organization and the UN Environment Programme estimated in 2004 that 3 million developing world agricultural workers experience severe poisoning from pesticides each year, with 18,000 deaths. They are also indiscriminate poisons. Over 98% of sprayed insecticides and 95% of herbicides reach non-target species, air, water and soil. They kill pollinators, destroy bird habitat and threaten endangered species. Species develop resistence which results in an arms-race involving ever higher doses.

Injecting hormones into beef cattle is commonplace in the USA and Canada and has been practiced for many decades in other countries. It’s often combined with the intensive feedlot system, where animals are confined and fed on grain and injected with natural and artificial hormones to increased their growth rate and reduce the time taken to market. Six hormones were banned by the EU: estradiol, progesterone, testosterone, zeranol, melengestrol acetate and trenbolone acetate. The last two are entirely synthetic. It’s always been consumers who object to having hormone-injected beef on the supermarket shelves. Concerns about northern Italian schoolchildren going through premature puberty in the late 1970s because of hormones in meat in their school dinners still haunt parents.

Organic food aims to cycle resources rather than squandering them. It aims to promote the natural world rather than eradicate it. It restricts artificial fertilisers, pesticides, food irradiation and the use of industrial solvents. Surely we should just call it food and non-organic food should have to be the one changing its name. I suggest ‘industrial food’.

‘Is organic food any better for you?’ isn’t really the question you should be asking. 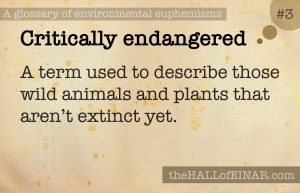 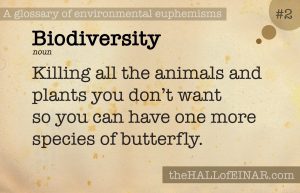 Biodiversity – a glossary #2 Biodiversity is a pretentious term used by people who want to sound as if they understand something that you don't.… read more 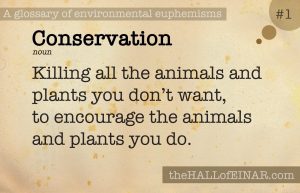 Conservation – a glossary #1 Conservation sounds like it should be a good thing, a thing with which everyone agrees. We all want to conserve… read more