If you’ve not heard of Gnoss you’ve got a little catching up to do, so I thought I’d start at the beginning and then we can move on to their latest album, Drawn from Deep Water, later in another Sunday Review. I’m currently listening to Gnoss, their eponymous album from 2015.

Gnoss were Aidan Moodie and Graham Rorie until they officially became a four piece. They’re now Graham Rorie, Aidan Moodie, Connor Sinclair and Craig Baxter, all current and former students at the Royal Conservatoire of Scotland. Graham and Aidan’s 2015 album is a mixture of traditional tunes, original arrangements of traditional songs and covers. I bought it after Westray Connections 2015, where I heard them live, and took Graham and Aidan’s portrait after their set:

It’s made in Orkney which means, inevitably, it’s recorded and mixed by the excellent and ubiquitous Brian Cromarty. There’s exceptional fiddle playing and joyous mandolin. If you like the yearning sound of the landscape on traditional instruments then this is definitely an album for you.

There are some other gems on their YouTube channel. Do check them out. It’s an ambitious debut from young people with a strong idea of what they want to create. It’ll repay your attention.

Angie Lewin’s a rare example of something I never thought would happen: an artist I love who actually becomes massively popular. She makes limited edition original prints using linocut, wood engraving and screen printing techniques plus original watercolours and textile designs and other illustrations.

I’ve thought for decades that the definition of an original print should be taught so that people know what they are buying. An original print is a artistic print which is made directly from an artist’s own woodcut, etching, or other original production, and printed under the artist’s supervision. It doesn’t exist in any other form. There isn’t an ‘original’ which is copied or photographed or reproduced, each print is original. They most definitely aren’t photographic reproductions.

Plants and Places is a book first published in 2010. Her style is a direct descendent of Edward Bawden and Eric Ravilious. She acknowledges them both as inspirations. Her colour sense is exceptional and her choice of a modern palette will define our age as one of ‘The Ravilious Revival’ or ‘The new Bawden Years’.

Angie Lewin’s interpretation of classic printmaking has been a huge influence on others and inspired a multitude of imitators. Few have her powers of observation or control of composition.

Buy it from Amazon here.

I particularly like her use of seemingly abstract geometric shapes to represent natural patterns.

You can tell what everything is, even though it’s not represented how it actually is. It’s a world populated by mark-making as a symbolic language. Her watercolour work is as beautiful as her printmaking.

Angie Lewin’s work could only be criticised for what it isn’t – it isn’t dark or about the human condition. It’s a beautiful portrayal of the natural world. Her fabrics make wonderful lampshades but her art is so much more than that. The book reveals treasure on every page.

That’s it for this week. I’ll be back with more reviews of things you might adore next Sunday.
In the meantime, I wish you a great week. Keep safe, everyone. 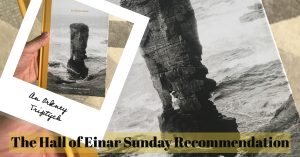 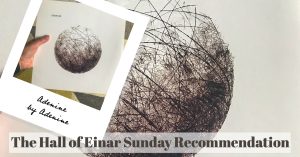 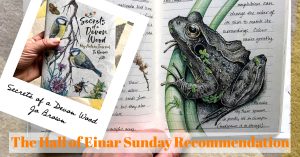 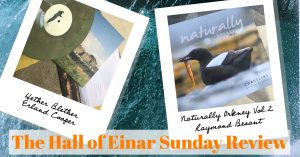 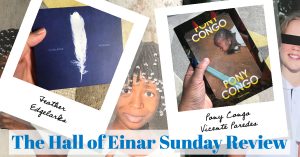 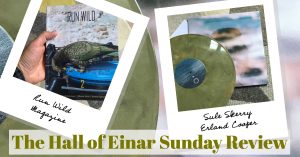 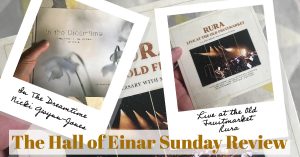 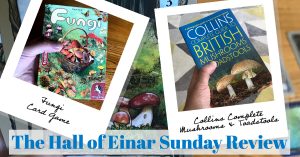 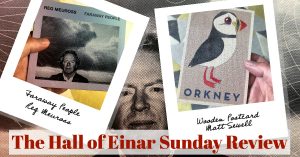