We’re having a day out in Alexandria in Virginia. We’re at Belle Haven Marina:

The weather is great. There are kayaks and small sailing boats as well as smaller motorboats here. Out in the water, just off the jetties is a platform with a large birds’ nest on it: 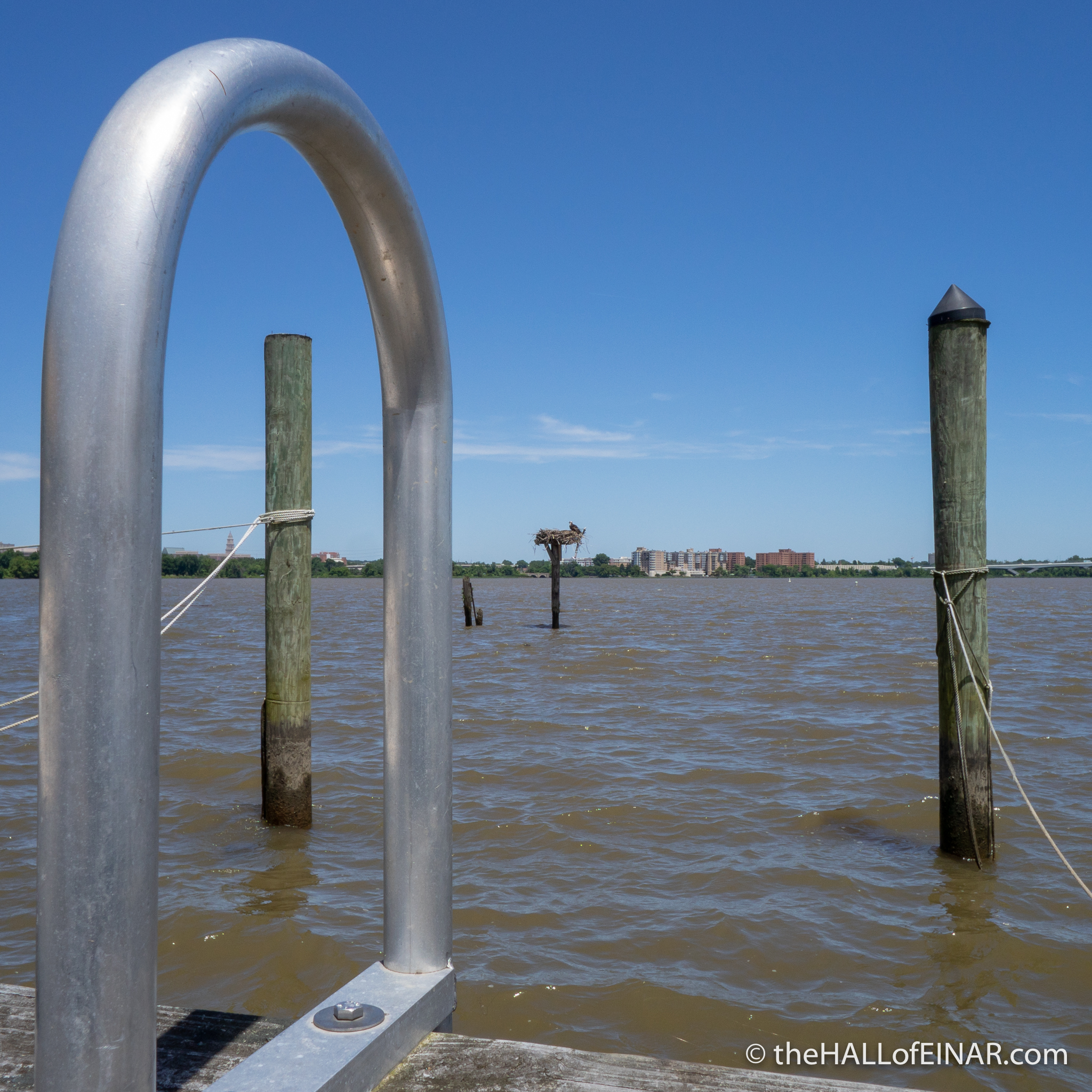 It’s in the Potomac River with Mallard Ducks paddling by and the buildings of Maryland across the River: 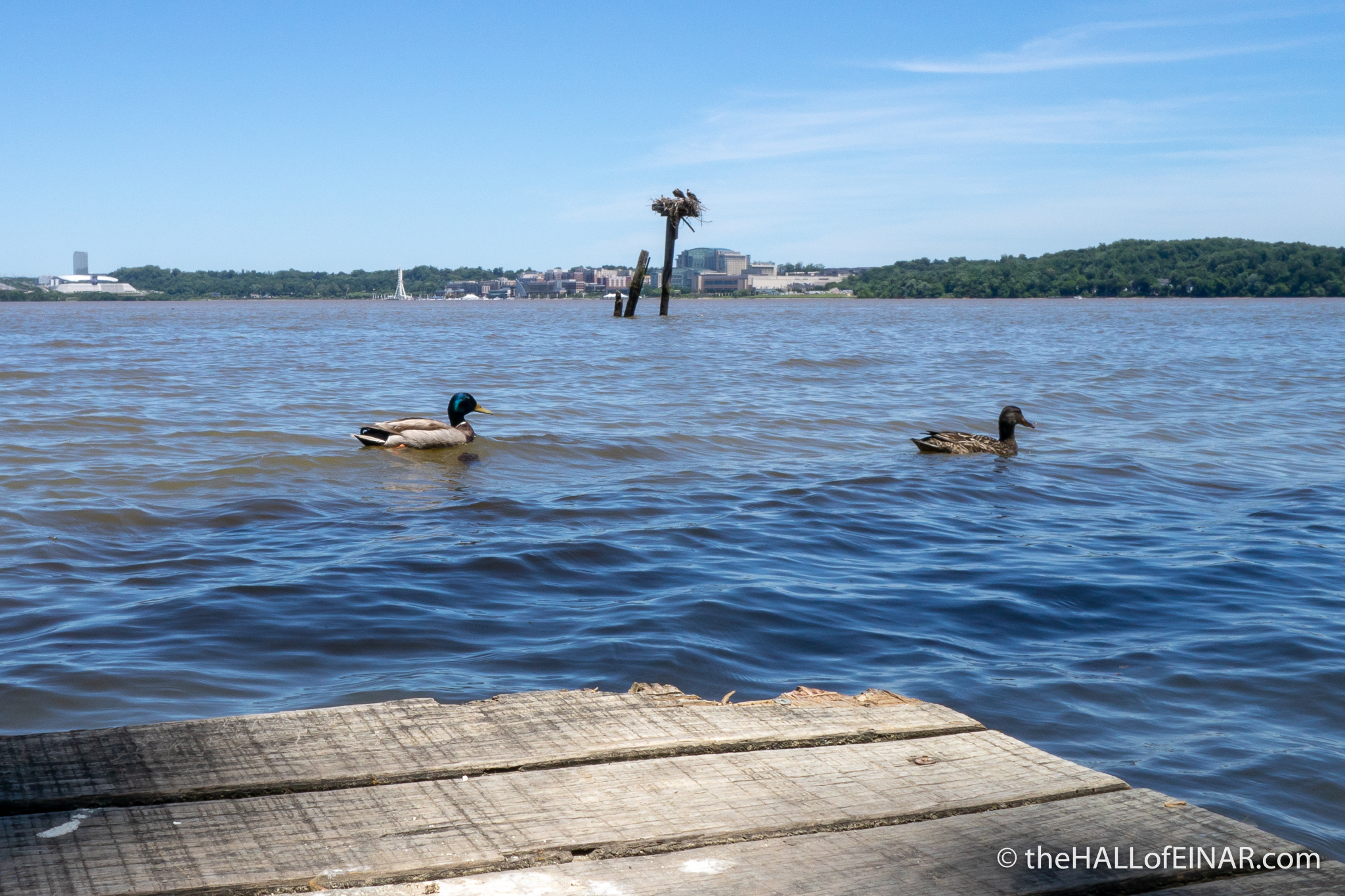 It’s an Osprey nest. This pair of Ospreys, Pandion haliaetus, are an experienced pair of parents and have two chicks in their nest this year: 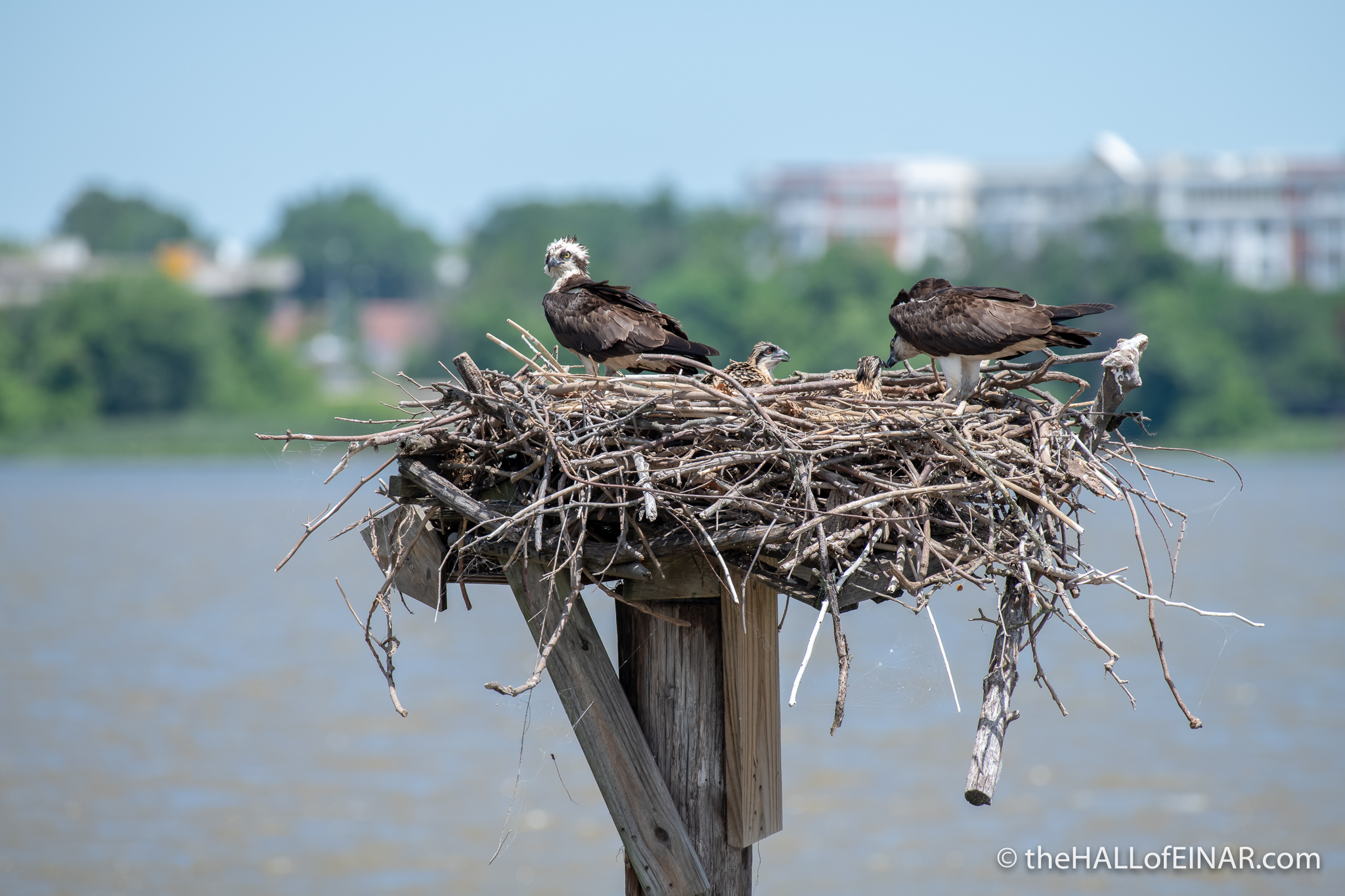 Here’s the smaller male with one of their chicks. He is the one I’ve seen doing most of the fishing this morning. He has bright yellow eyes while the chick has darker deep orange eyes: 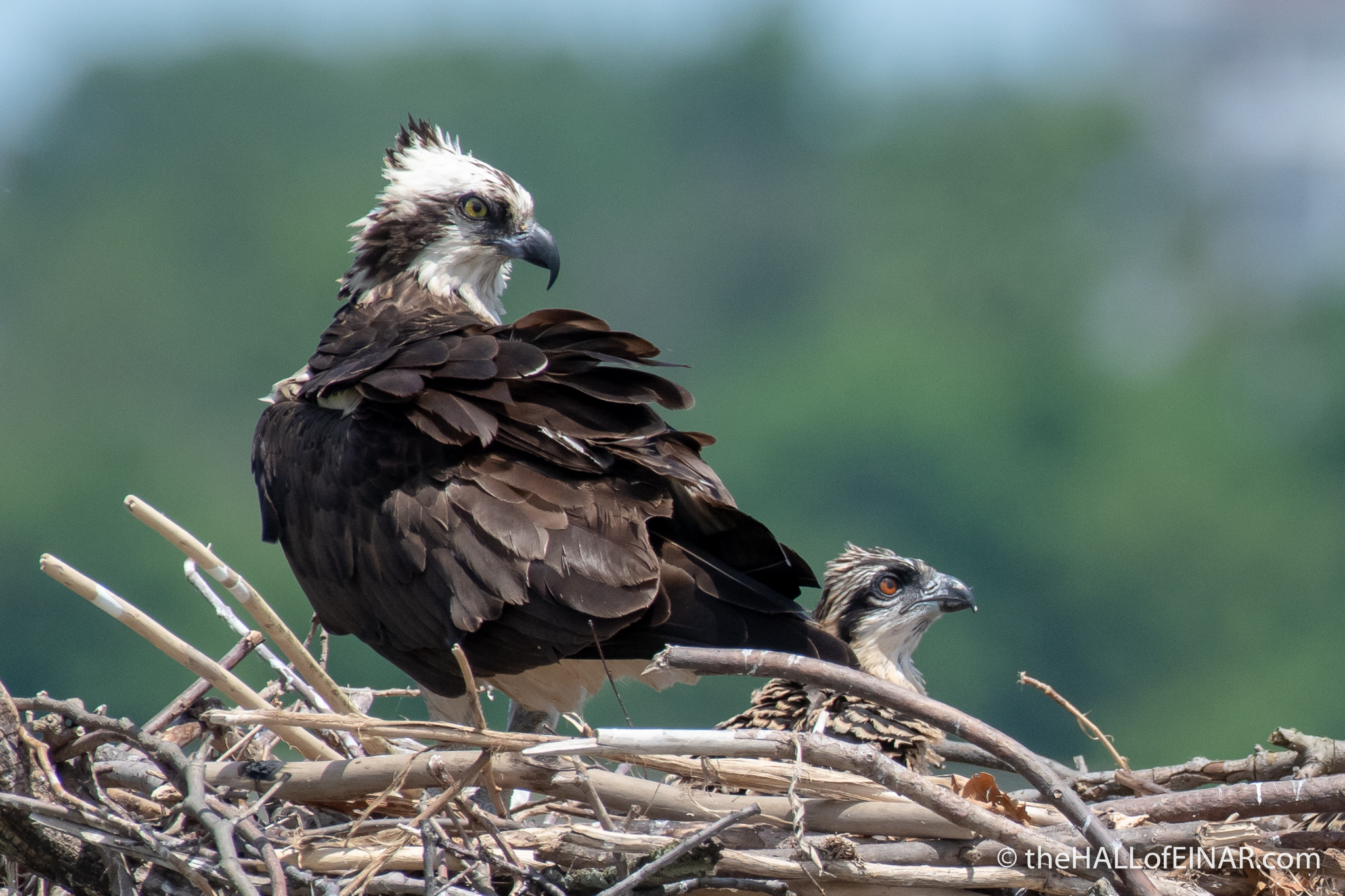 Here’s the larger female with both of their chicks: 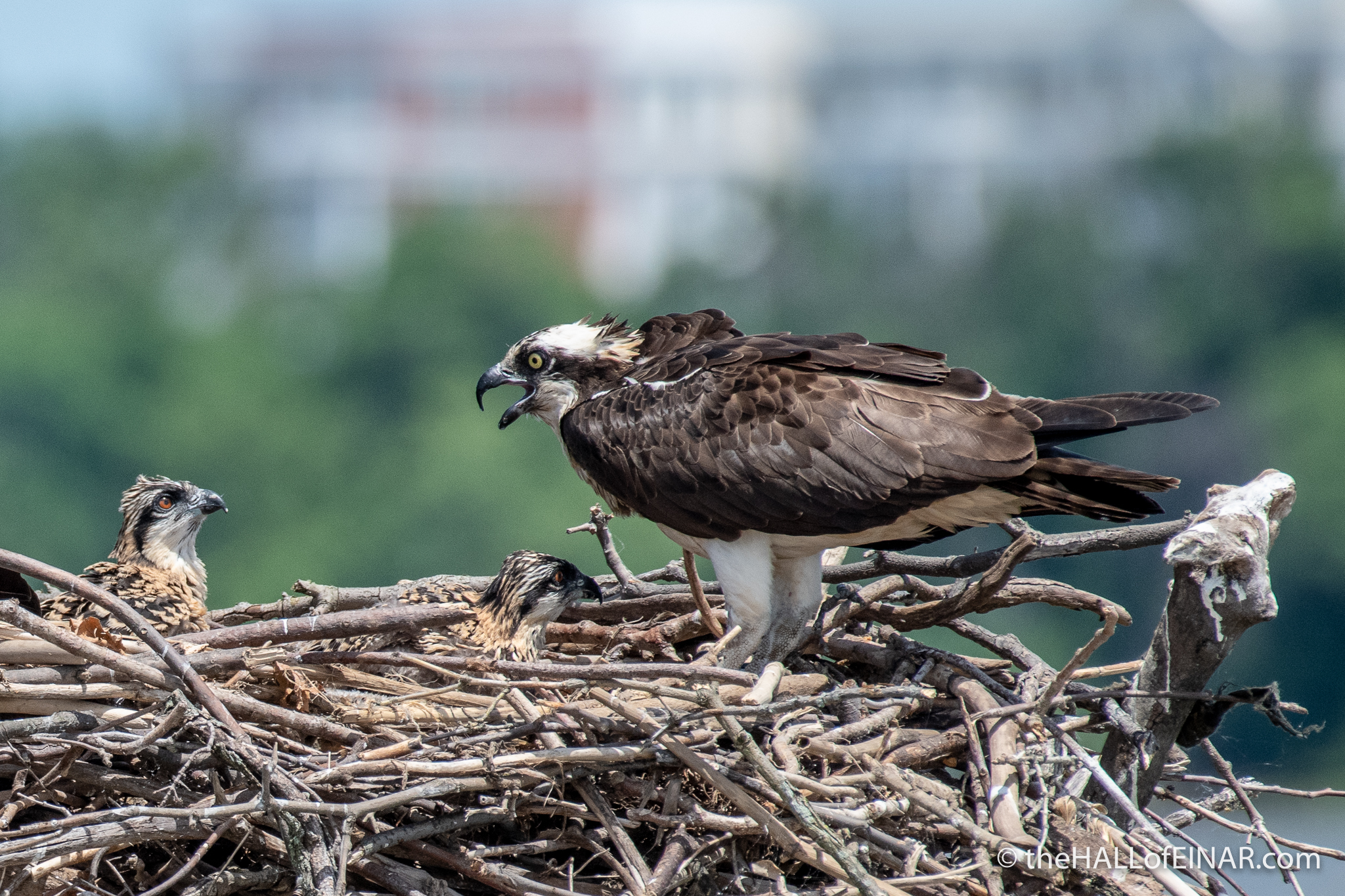 The male flies off across the River. The female lets out an urgent alarm call whenever vultures appear overhead. She also calls when another Osprey appears. The male is lost to the eye as he strokes the air on the other side of the River. I hear the female call and the male appears with a beautiful fish with a yellow-belly: 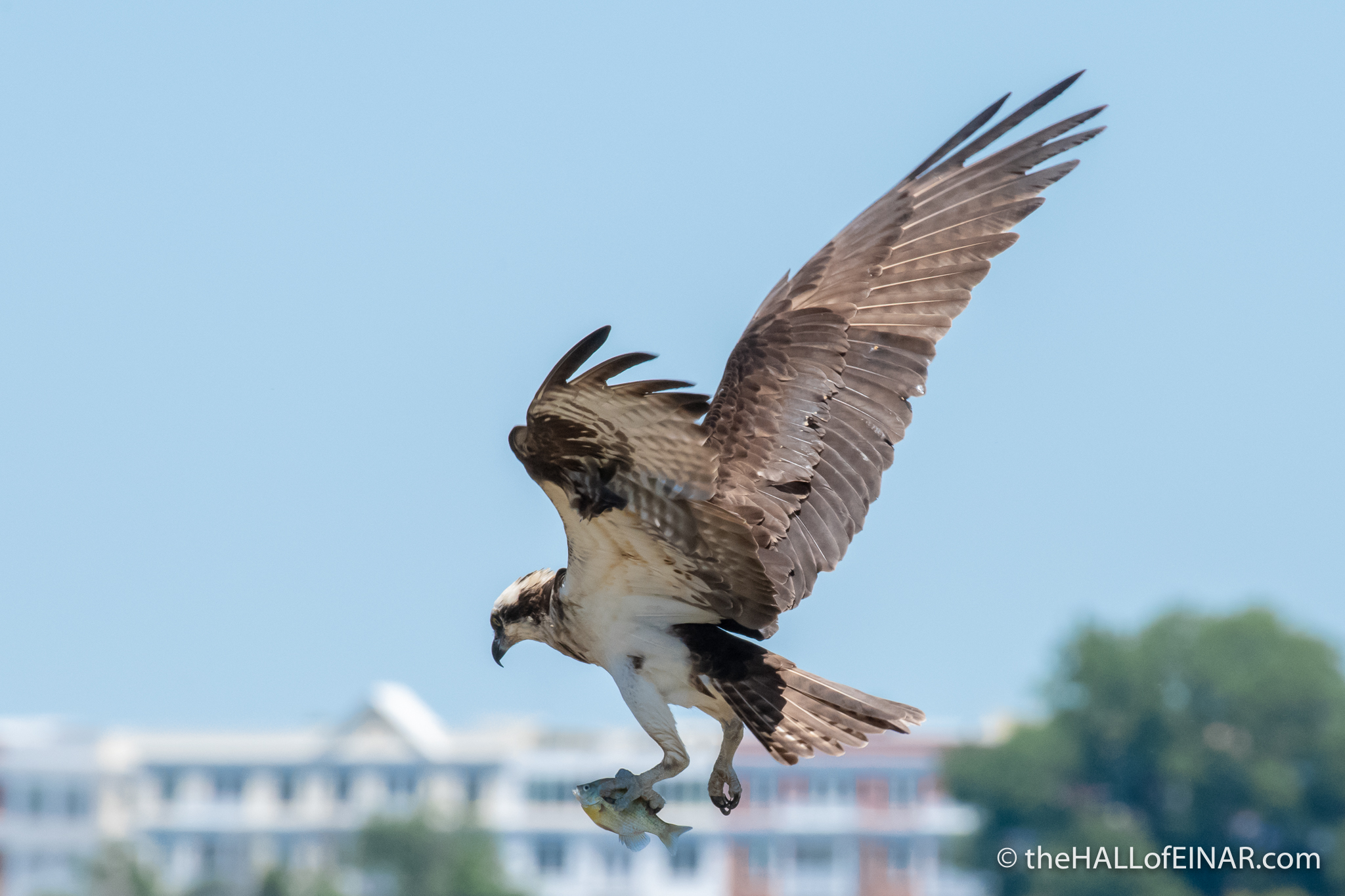 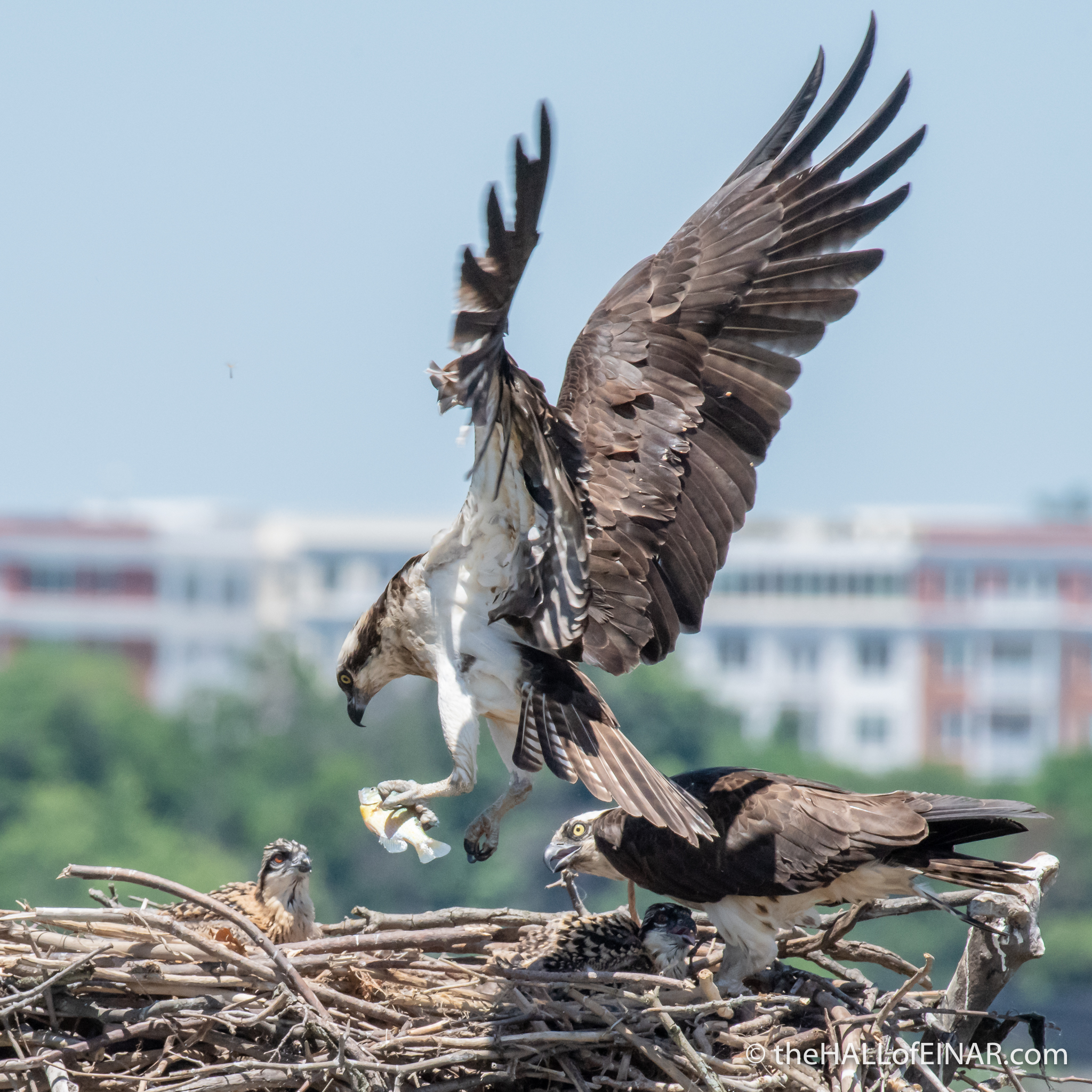 The female is a very impressive bird. She is the one who tends to the chicks, tears up their food and feeds them, and shelters them from the sun when it is too hot: 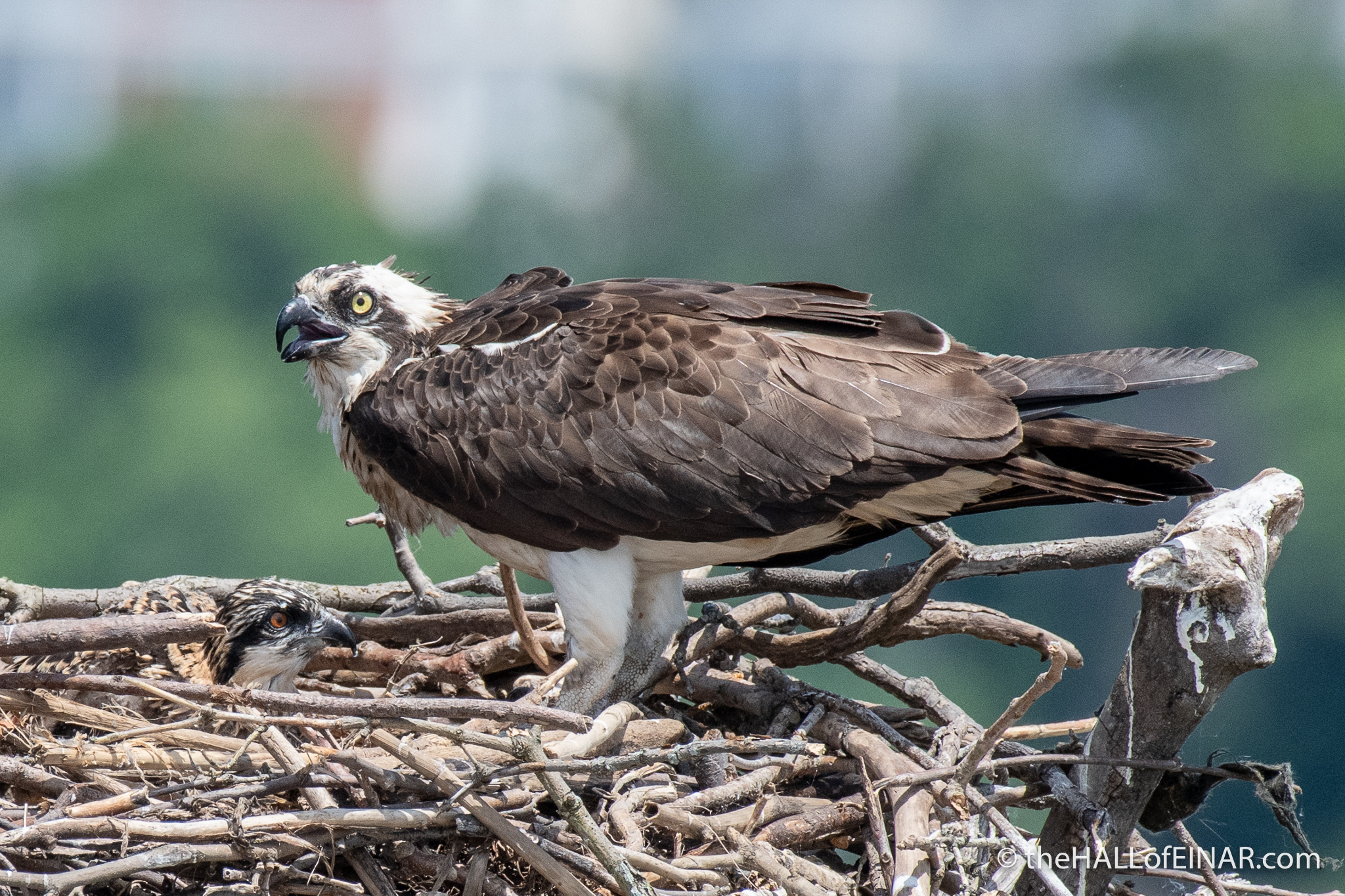 She flies off across the River. I think she’s going to fish. Her male partner has done all the fishing so far. She dips her toes in the water, and then again. Surely she can’t be fishing, as she’s not gained height and is so close to the water? She dives into the River with her feet and picks up a branch and lifts it, dripping, out of the water: 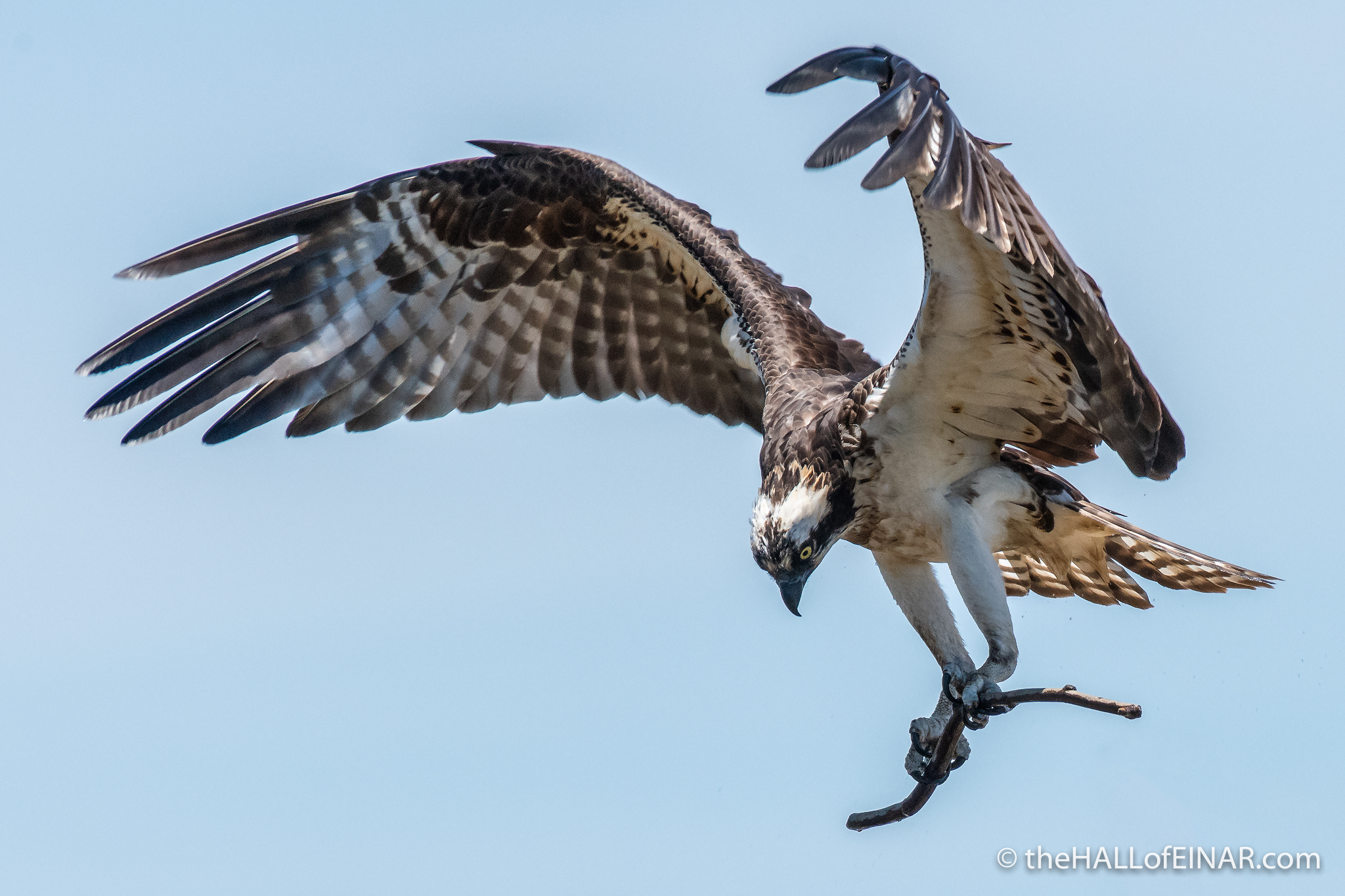 She flies over to the nest with it as the male and their chicks watch on: 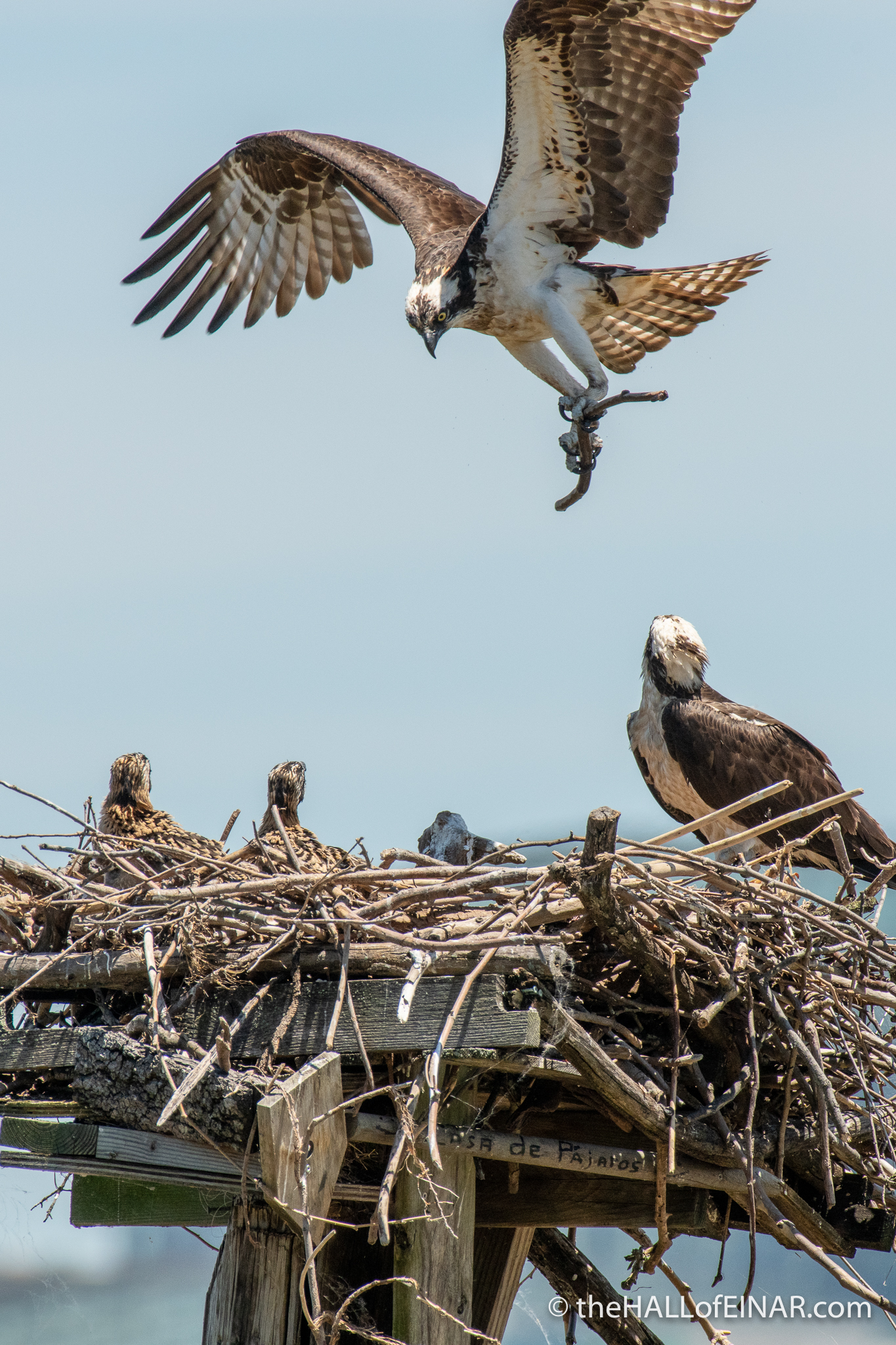 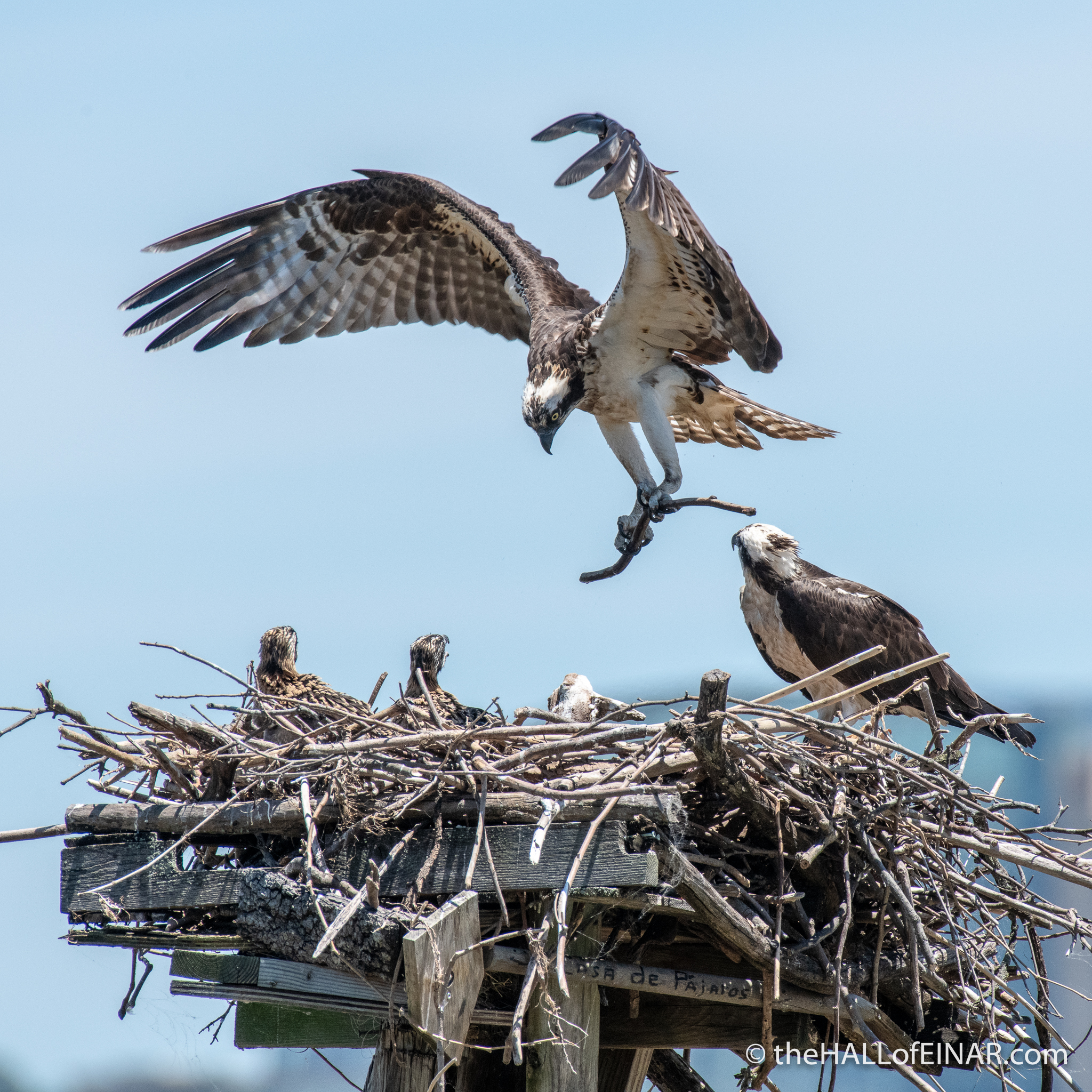 They are fast becoming my favourite family. Now it’s time for a sit down and a snack to recover from all the excitement. For me as well as them.