It’s Day 13 of turning the pages in this Ladybird Book of British Birds. I’ve been enjoying the Allen Seaby illustrations but the text? Well, the text I’ve found to be stuck in a past I’d rather not inhabit. 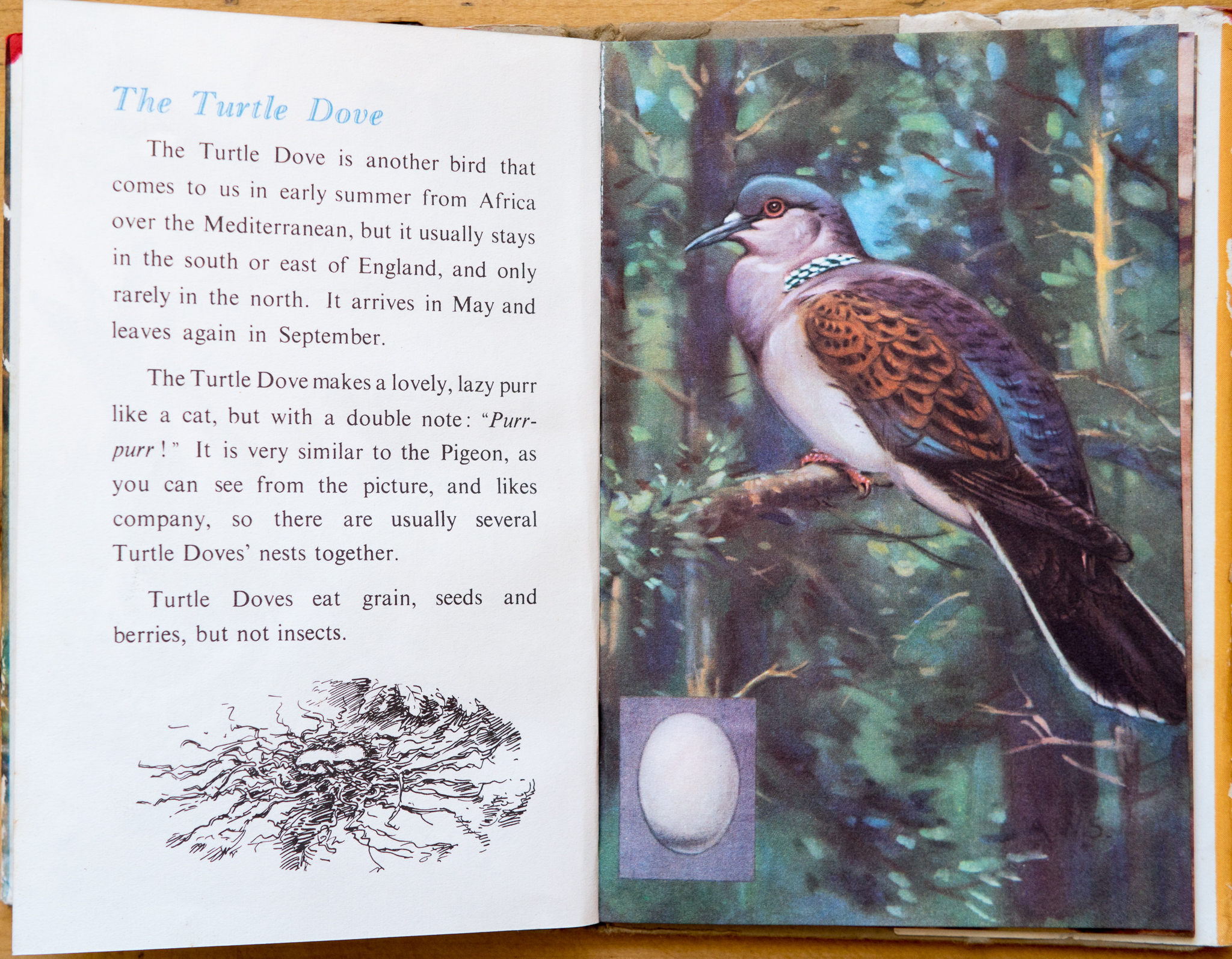 “The Turtle Dove is another bird that comes to us is early summer from Africa over the Mediterranean, but it usually stays in the south or east of England, and only rarely in the north.”

So far this British Birds book has only ever mentioned England. It’s as if Scotland and Wales don’t exist. I check the RSPB’s website and they say: “The turtle dove is mainly a bird of southern and eastern England, although it does reach as far as Wales.” At least the RSPB knows Scotland and Wales exist.

Turtle Doves are vulnerable to global extinction; they are on the IUCN Red List of Endangered Species. They have had a 98% decline in the UK population from 1970 to 2015. It sounds as if I was lucky to see one: 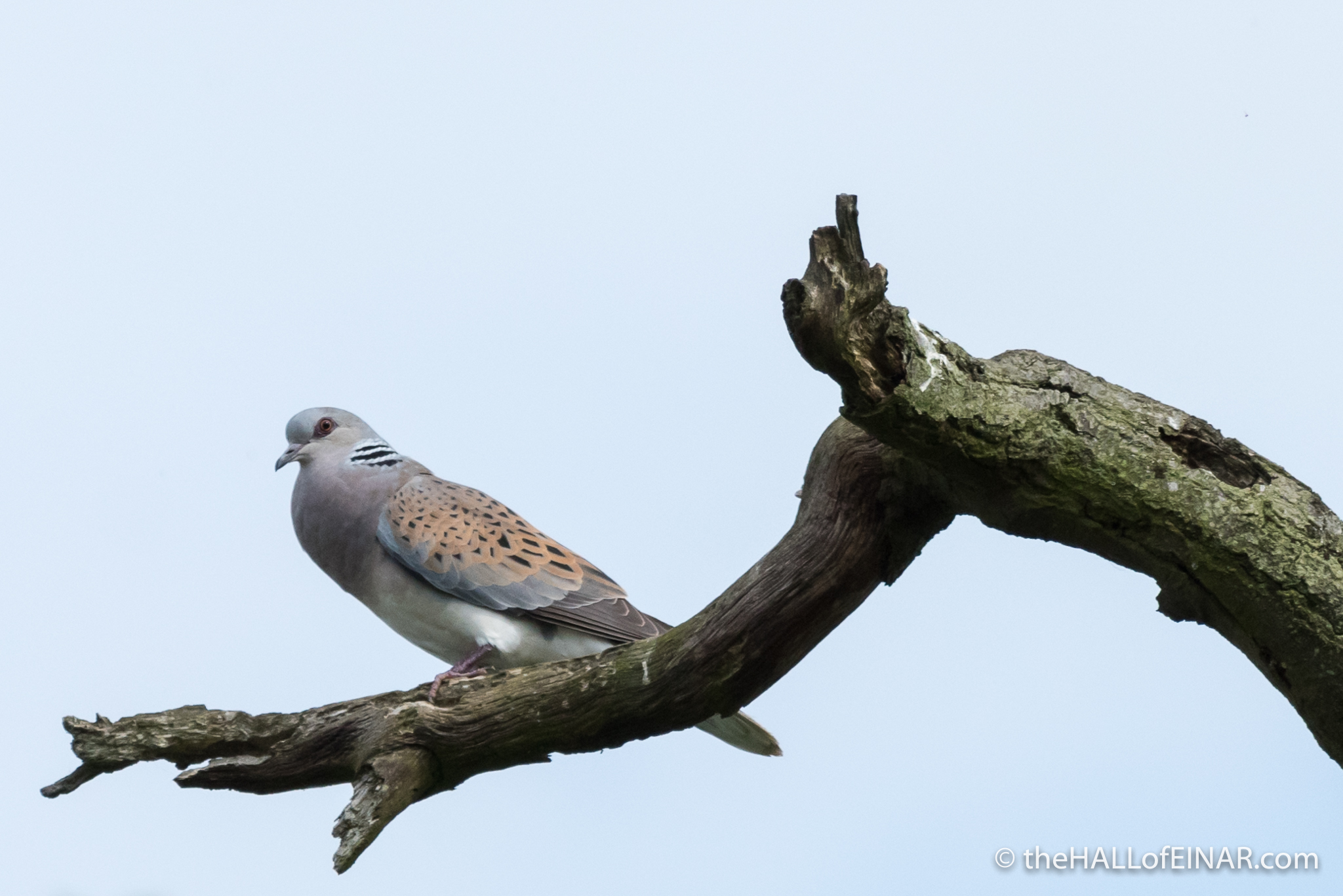 “Turtle Doves eat grain, seeds and berries, but not insects.”

That’s the problem. Modern farming practice means there’s no habitat and no food for them. What can we do about that?

Firstly, Turtle Doves need some food. There’s little food for them here. With fewer hedges there are fewer field boundaries. Fewer field boundaries mean fewer weeds. Fewer weeds mean fewer seeds. Fewer seeds mean fewer Turtle Doves. Have you ever noticed that the British countryside isn’t green, it’s brown? Has it ever seemed odd to you, when your garden is overrun with weeds, that the fields surrounding us are completely bare soil? That’s because all the plants have been poisoned with industrial weedkillers sprayed on with devastating results for wildlife. Turtle Doves would die of starvation in the British countryside.

Secondly, just thinking about only eating dry grain gives me a parched throat. Surely Turtle Doves need to drink? Turtle Doves probably need to drink more than other birds, and yet thousands of ponds, pools, ditches and wetland habitats have been drained and destroyed. That’s killed all the fish, frogs, toads and newts as well as the whole ecosystem within which they live. All those dragonflies, damselflies, water boatmen, water scorpions and even Great Diving Beetles have gone. It’s finally against the law now to disturb Great Crested Newts, but not before they are critically endangered as well. Turtle Doves would die of thirst in the British countryside.

Thirdly, Turtle Doves need somewhere to nest and rear their next generation. They need dense patches of woodland in which to nest but since woodlands now cover just 10% of England, rather than covering most of it, they are forced to use hedges. After the Second World War there were approximately 500,000 miles of hedge in England. By the 1990 that had more than halved to 236,000 miles. Turtle Doves prefer hedges which are 4m high and wide. Turtle Doves would die of homelessness in the British countryside.

Some people turn this into a science and produce charts and statistics. It’s actually simple: Turtle Doves have nothing to eat, nothing to drink and nowhere to nest. I’m amazed we’ve still got any.

They are beautiful birds. Try to see one before you can’t. 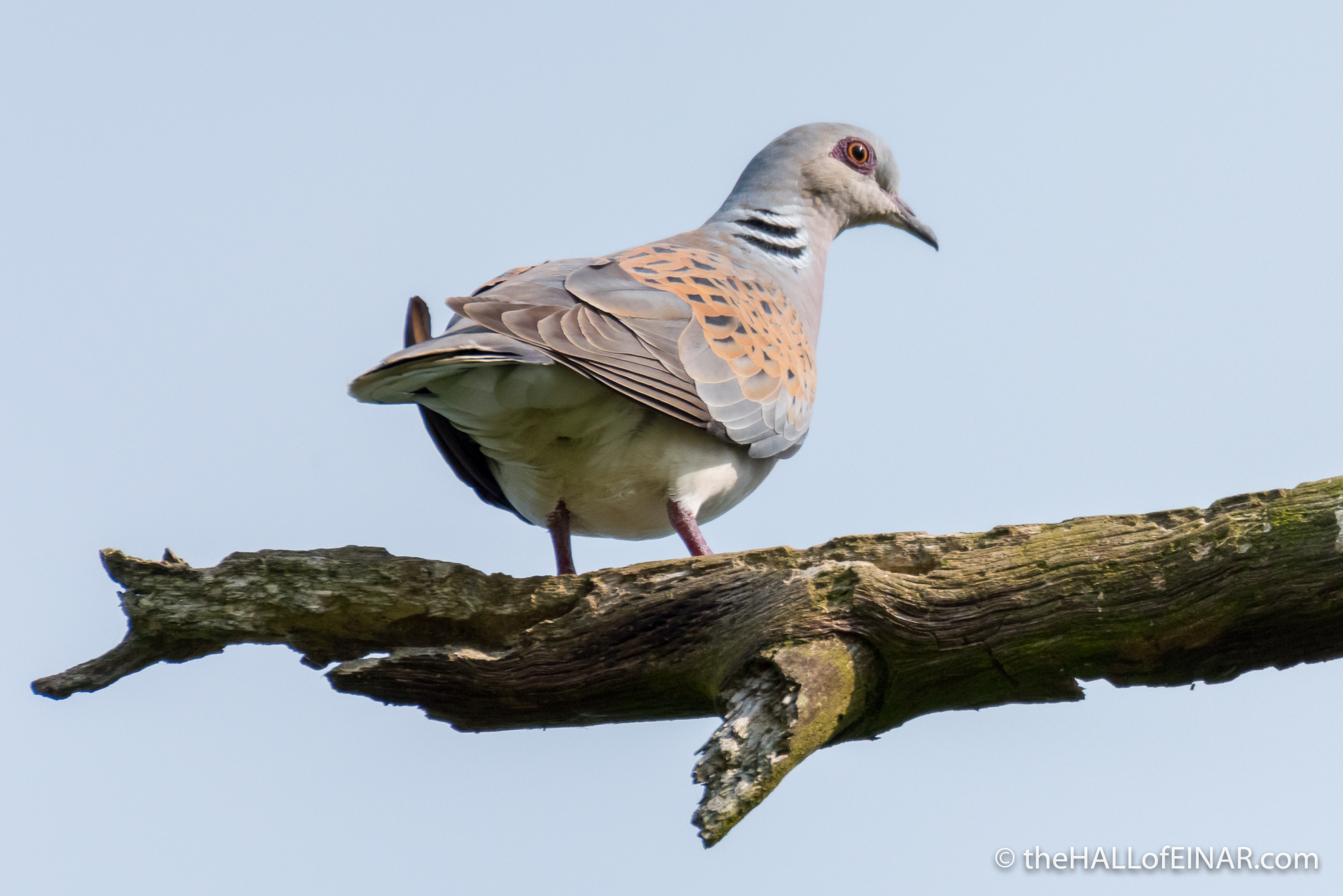 In Britain 70% of the land is owned by 1% of the population. If that was a developing country we would complain about the rampant inequality and support the opposition to overthrow the government. In fact just 160,000 families own 66% of our Country. Many of these are the same families which conquered Britain in the Norman Conquest of 1066. William, known as William the Conqueror afterwards, but William the Bastard at the time, and his people, took Britain by violence and bloodshed. A thousands years later those people’s families now have a parliamentary democracy and the rule of law in order to keep it. People with names like Darcy and Mandeville and Pakenham and Talbot are often posh for a reason; they’re usually from families who have been fabulously wealthy for 1,000 years. For example, people with Norman surnames are still twice as likely to go to Oxford University. (Note: I went to Oxford University and my name’s not Norman; it’s David). These are the people who own our land and these are the people who have destroyed the natural world it contained. Most ironic of all, it’s the people of Britain who have paid them to do it.

“We’ve destroyed your countryside and what’s more, you’ve paid us to do it.”

In feudal systems the serfs had to work to earn money to pay the lord of the manor for the use of their land. The poor had to work to earn money to pay the rich. We still have the same system, except Government is the middleman. We work to pay the Government taxes and the Government gives money to the wealthy landowners in the form of subsidies and grants and stewardship money. In many cases the rich get paid simply for owning the land, and the poor have to pay for land which they aren’t even allowed on. Sometimes the landowners have to do some work to justify the payments. In the past this has involved landowners being paid to remove hedgerows, ponds, woodlands and orchards. We’ve been paying landowners to destroy natural habitat.

“We’ve destroyed your countryside and what’s more, you’re going to pay us to restore it.” 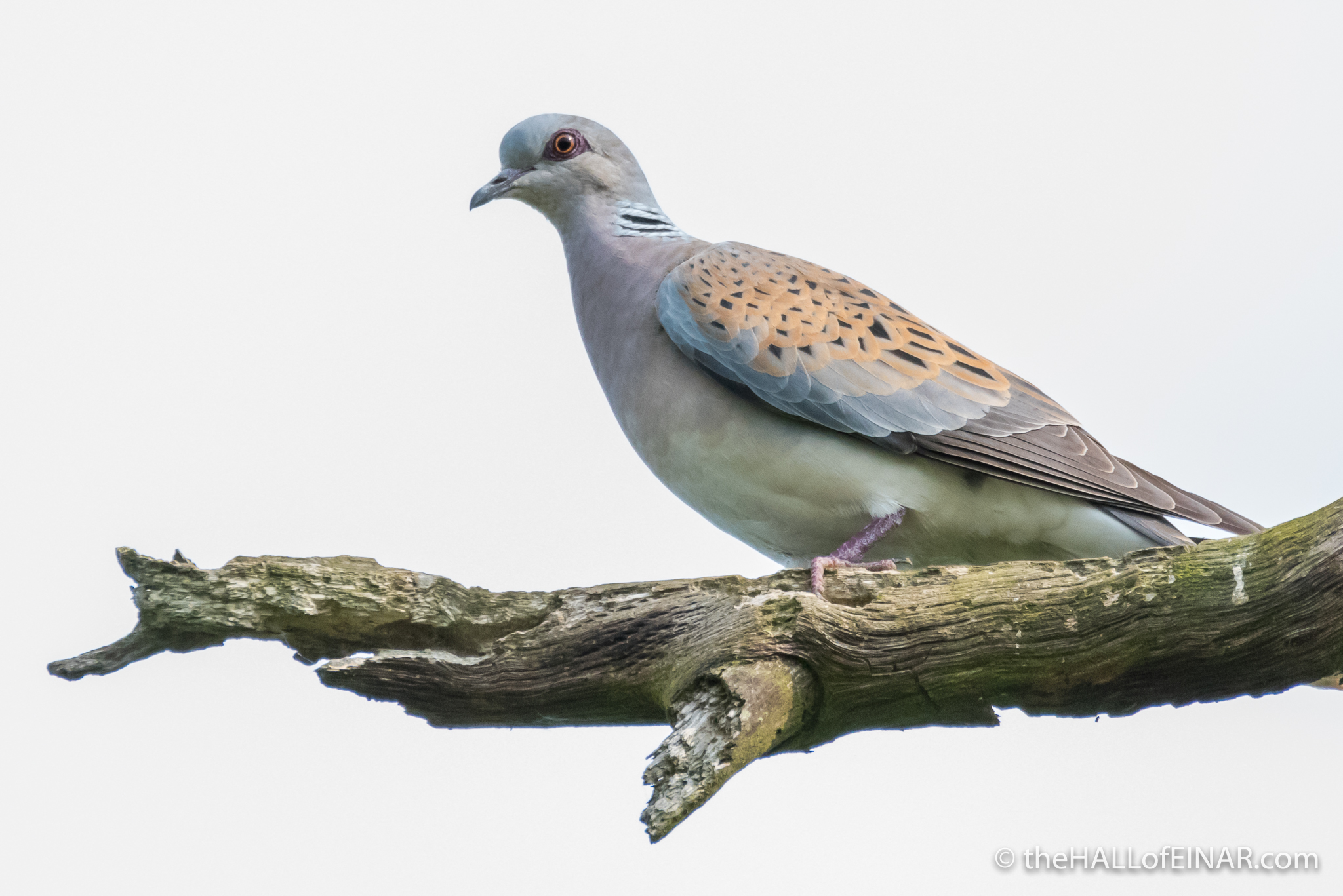 A Ladybird book stuck in the past? I’m actually stuck in a present I’d rather not inhabit. 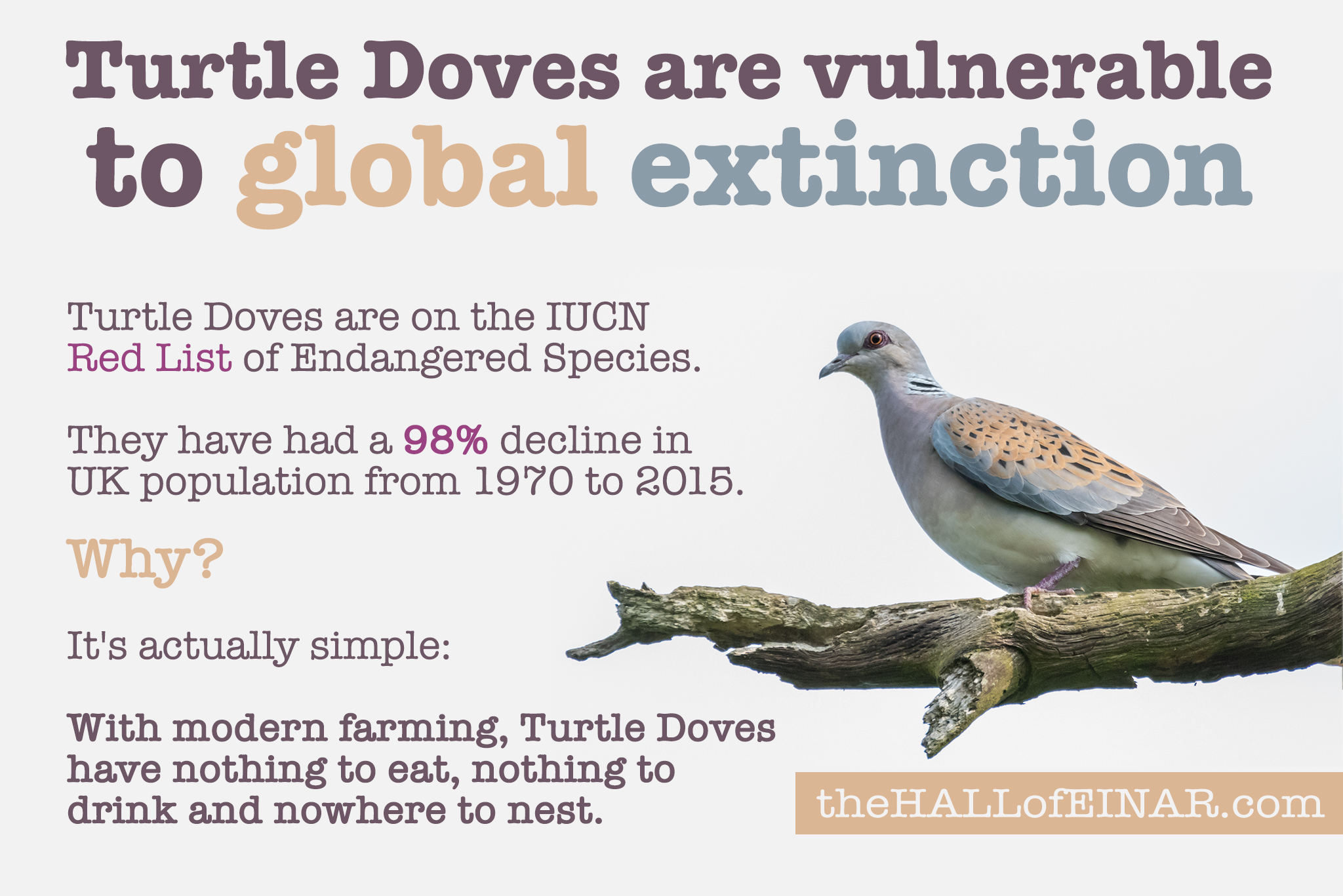