Looking through my old mushroom photographs there’s a very distinctive one; it’s Pholiota squarrosa, the Shaggy Scalycap which I found in Bovey Tracey in 2005: 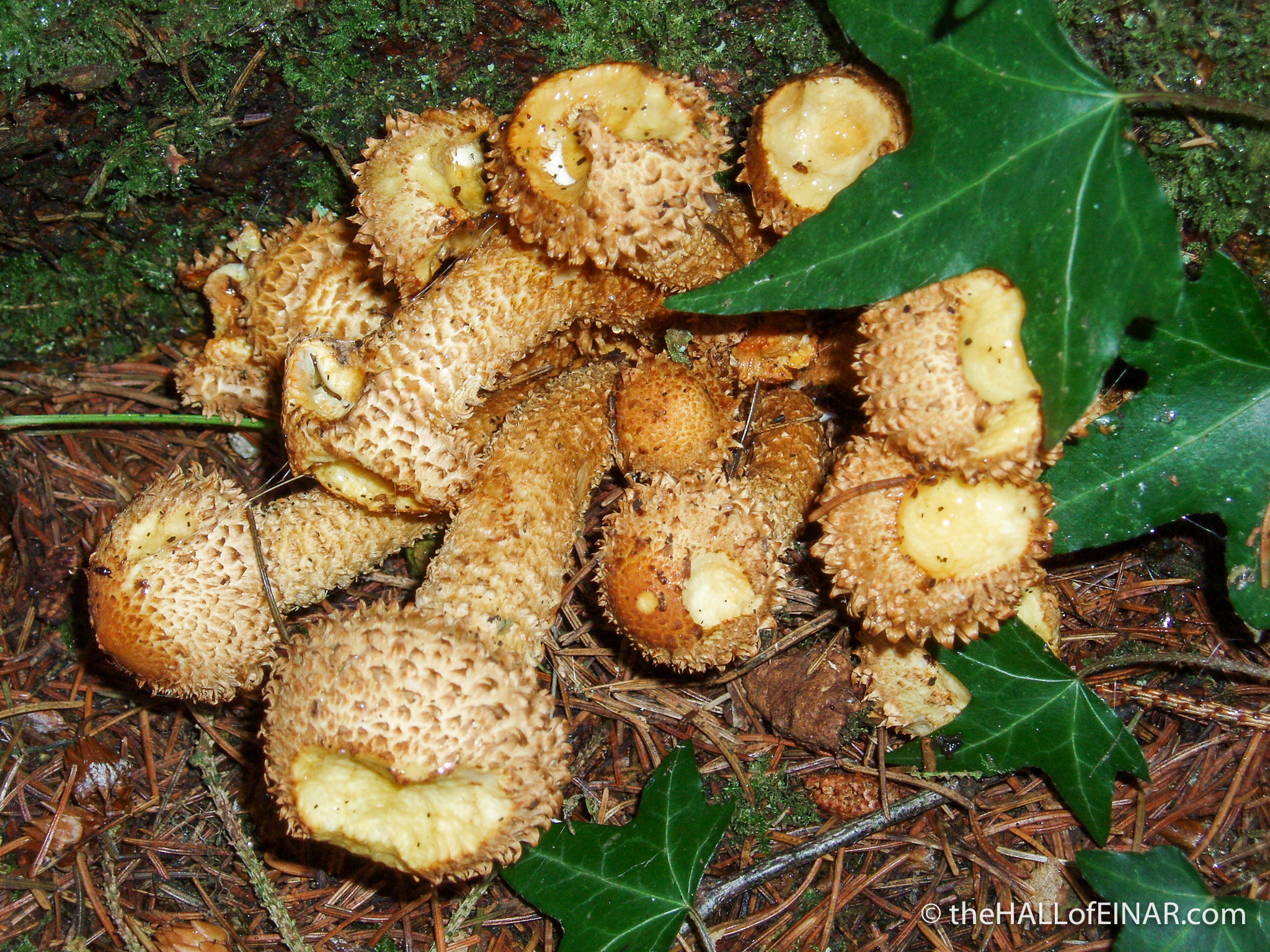 Here it is in Coloured Figures of English Fungi or Mushrooms by James Sowerby from 1797: 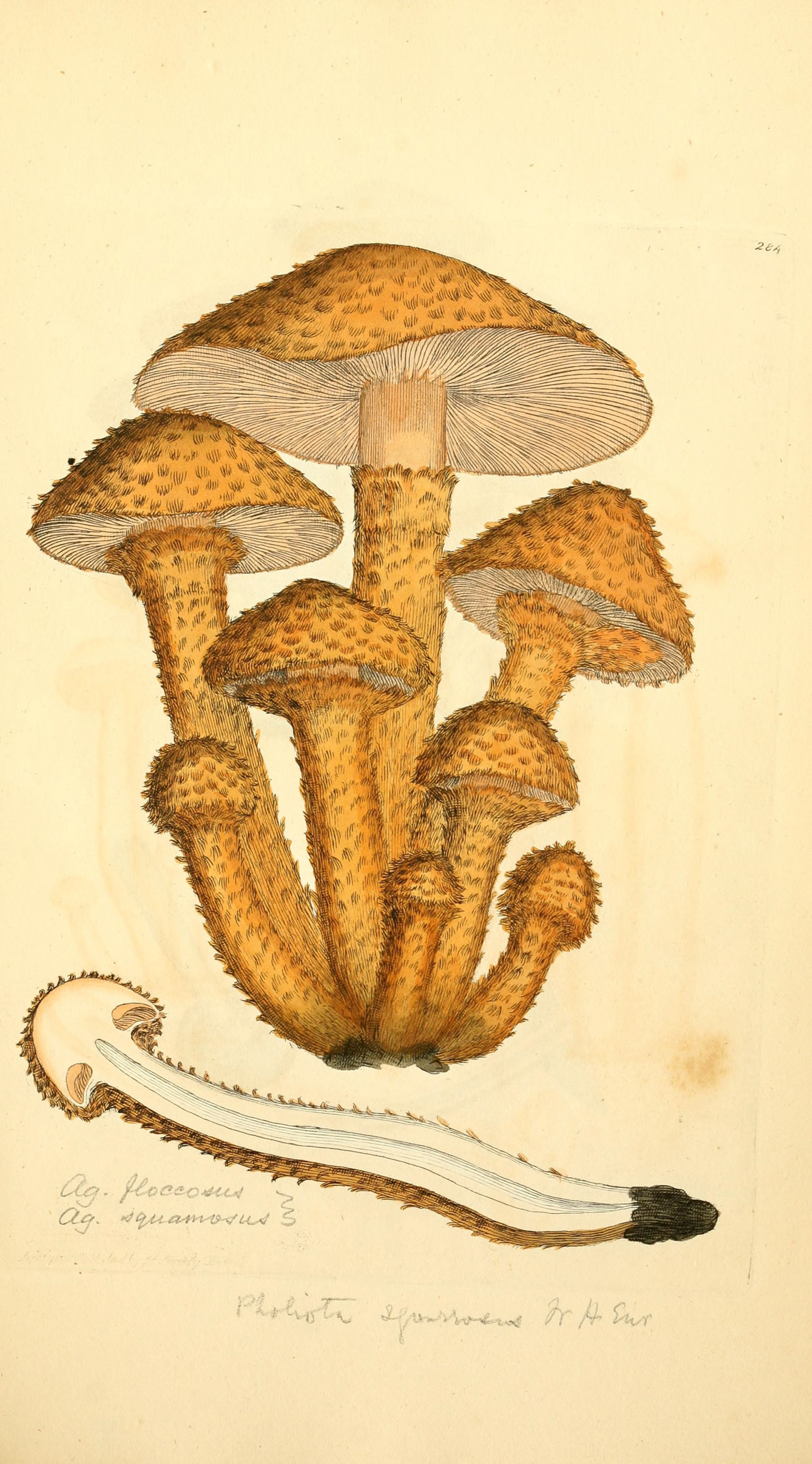 Sowerby was a brilliant observer and supremely talented artist.

In 1871 it was described in Der Führer in die Pilzkunde, or ‘The Leader in Mycology’ by Paul Kummer:

In 1882 it was in Mordecai Cubitt Cooke’s: Illustrations of British Fungi: 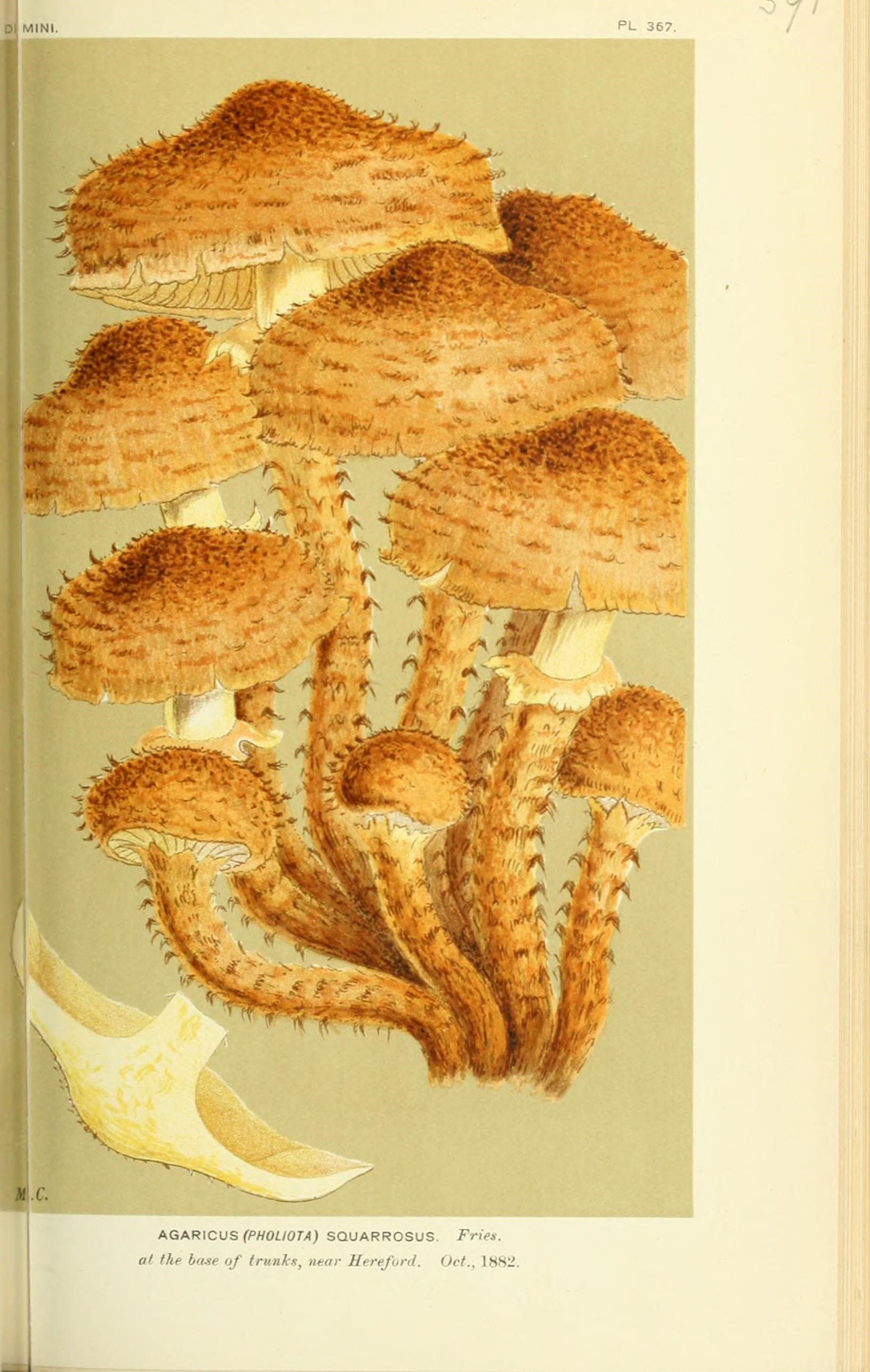 According to today’s Wikipedia Shaggy Scalycaps have a smell resembling garlic, radish, lemon, onion, or skunk depending upon who describes it. Perhaps the smell actually depends upon what the person’s been smoking? Or maybe what they cooked it with?

There’s a double-page spread of it in my copy of British Fungi and How To Identify Them by JH Crabtree which is probably from the 1930s. In fact, the Shaggy Scalycap is even on the cover, with a plate pasted onto the bottle green cloth-covered boards: 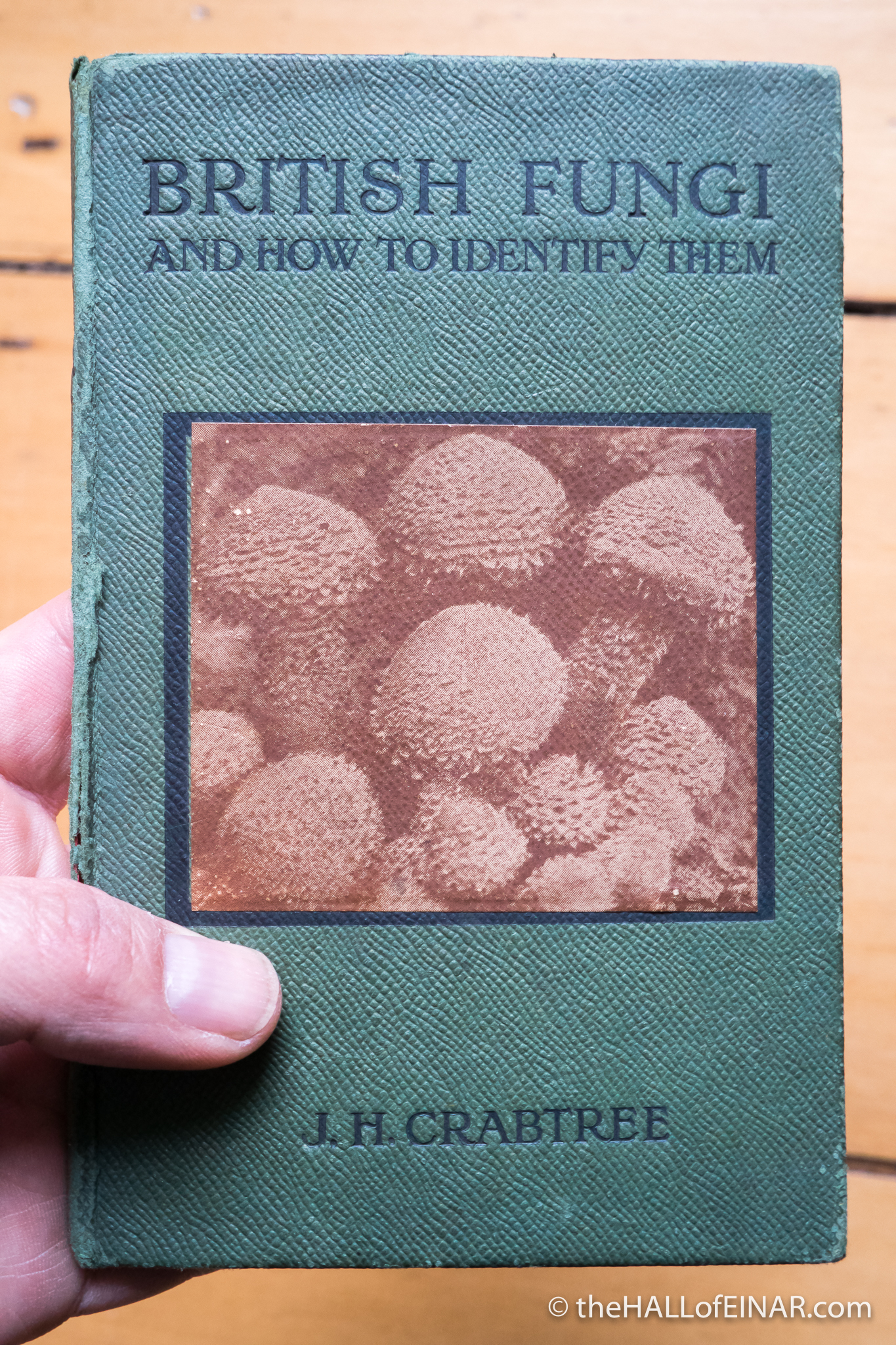 My copy cost 40 pence several years ago. That looks to have been a good investment now, as you would have to pay £1.24 to buy a copy of it on Amazon today. 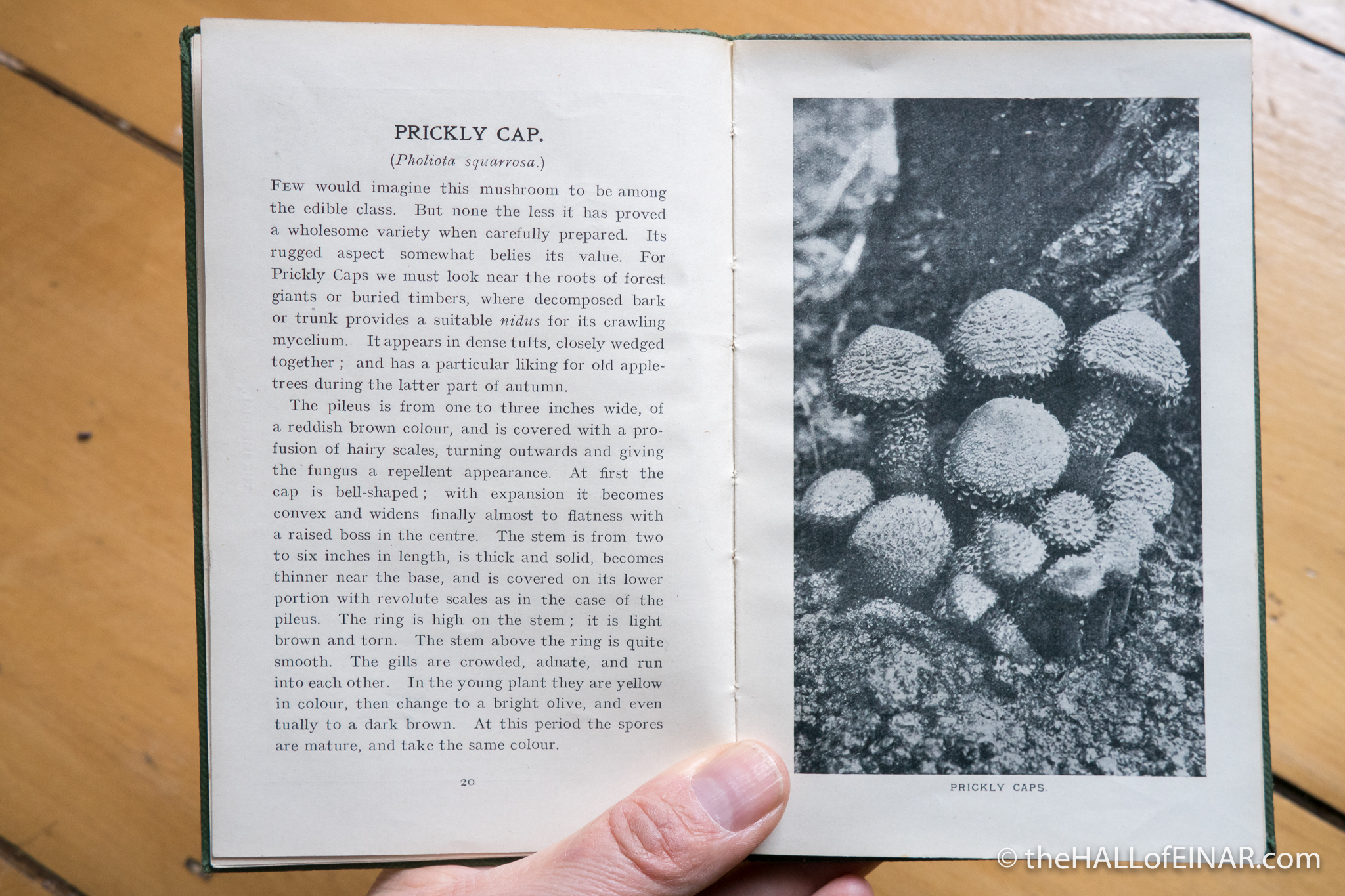 Here’s what it says, “Few would imagine this mushroom to be among the edible class. But none the less it has proved a wholesome variety when carefully prepared. Its ragged cap somewhat belies its value.”

Enough people have now taken the book’s advice and eaten it for us to now know that it’s not advisable to eat it. By the 1970s, the Collins Guide to Mushrooms and Toadstools was describing it as ‘indigestible’. Lately, it is described as ‘poisonous with alcohol’.

I first saw it over 40 years ago and noted how it was growing on living wood in my nature notebooks:

To grow on living wood, Pholiota squarrosa and its tree hosts have indulged in an ancient and continuing chemical war. Some trees react to being digested, dissolved and having their nutrients taken. Trees with a greater resistance produce more seeds and are therefore represented more in future generations over evolutionary time. Trees which produce oxidising chemicals can fight off a fungal attack. The fungi which can best survive this oxidising attack produce more spores and infect more trees. The trees which are left produce stronger chemical weapons. The fungi respond in an ever-increasing arms race of evolutionary complexity.

These Shaggy Scalycaps have very high levels of complex chemicals called phenylpropanoids. These are likely to be fungal defences against the chemical defences of the trees. They are also an essential inhibitor of the enzymes which produce gout and intense pain in the joints of millions of people. The natural world is full of such complex relationships and humans have discovered hardly any of them. The discovery of the fungus penicillium’s ability to kill bacteria was an accident. What else awaits us in the study of the chemical interactions of fungi? What else will be lost before we find it?

Unfortunately we are in the middle of the Sixth Mass Extinction of species on Earth because of human overpopulation and overconsumption; it is likely that we will make many species extinct before we discover the complexity of their relationships.

I wonder what’s been eating the tops of my find? Shaggy Scalycaps are a favourite food of Squirrels; let’s hope they don’t drink any alcohol. At least they’ll be protected from gout.