Many things have changed since The Second Ladybird book of British Birds and their nests was published in its third edition in 1955. Here’s my copy and no, this wasn’t my copy as a child:

What has changed? There would be an outcry now if anyone published a book for children with the statement, “Looking for nests is great fun.” Even showing images of eggs is a taboo subject in case we go back to a culture of children collecting eggs as a pastime. Children used to collect eggs as food long before it became a hobby for collectors. Lapwings were nearly made extinct in the UK because of egg collecting for food and they needed the Lapwing Act of 1926 to save them. Since then there’s been an important cultural shift.

It’s been illegal to take birds’ eggs from the wild in Great Britain since the Protection of Birds Act 1954. “Do not take any of them – that is cruel,” says the book. Actually it was a criminal offence. Since September 1982, with the introduction of the Wildlife and Countryside Act 1981, it’s also been against the law to have an old wild bird egg collection.

I’m reading the Ladybird book statement, “They are all quite common birds” in disbelief, since the book features the Nightingale which I have never seen. I’ve never heard one either. That’s hardly surprising, though, as the estimated decline in the Nightingale population in Britain between 1967 and 2007 is 91%. For every 10 singing in the night when I was born there is only one now. If Shakespeare and Keats were around now, Shakespeare would never have written his sonnet; Keats would never have written his Ode.

Here’s the page for the Dunnock, or, as Ladybird called it, the Hedge Sparrow: 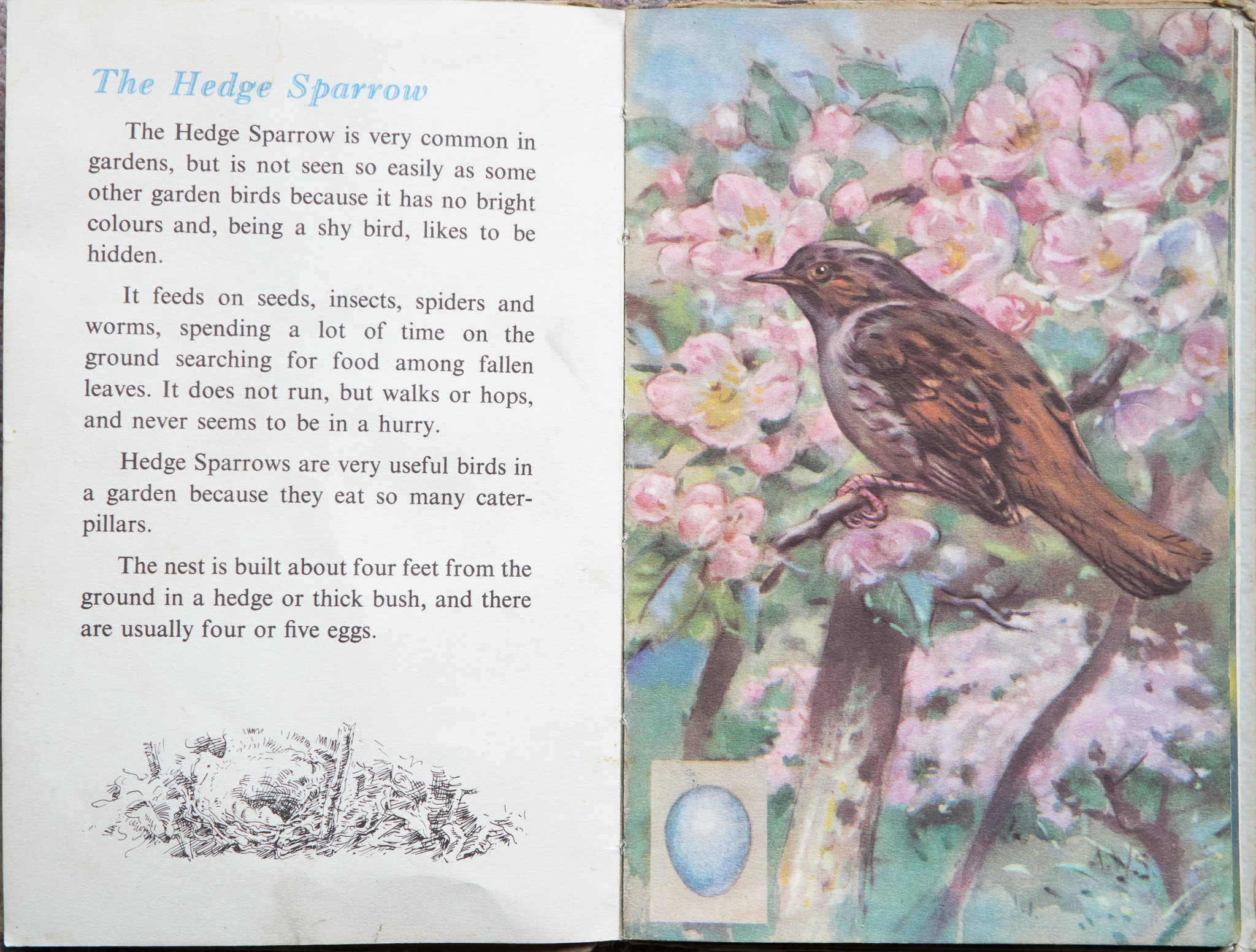 I’m fascinated by the cultural change we’ve been through in our relationship with the natural world. It was entirely normal in the 1950s to think of the ‘usefulness to man’ of all living things; “Hedge Sparrows are very useful birds in a garden because they eat so many caterpillars,” is the view from the 1950s. The classification of animals as ‘useful’ or the opposite, ‘harmful’ is likely to have developed very early in human social development. It’s from at least as far back as people beginning to settle down rather than lead nomadic hunter-gatherer lives. It’s carried on in the culture of farming still. I can hear it today, with friends and relatives describing a species as a ‘gardener’s friend’. The real reason for those judgements? To mark out those species which shouldn’t be killed.

I often find myself fundamentally at odds with people who hold perfectly ordinary views about the natural world just like in this Ladybird book:

“Hedge Sparrows are very useful birds in a garden because they eat so many caterpillars.”

It seems such an innocuous thing to say. Why do I disagree with it? I think Dunnocks are important in their own right and have an intrinsic value outside our judgements about their ‘usefulness’ to us. I like to think that in the future we’ll have a more enlightened attitude to the natural world and realise that animals and plants don’t have to be useful to us for us not to kill them. Species are useful to themselves.

As well as some of our attitudes, the names we use have changed in the last 60 years; now we call it the Dunnock. Forty years ago I wrote its name in my nature notebooks as Dunnock, Hedge Sparrow, Hedge Accentor:

Here are some of my first attempts at photographs of the Dunnock:

Dunnock – forty years ago in my nature notebooks

I’m still not happy with the photographs I’ve got so far because the Ladybird book got right that the Dunnock,

…being a shy bird, likes to be hidden.

In future I think that rather than Dunnocks being useful to us that we must be useful to them.