There’s something in the air today in Devon. It’s the merest hint of a dampness and a chill in the air whispering to me that autumn is on its way. It’s as if something is calling me. There’s the scent of far-off mushrooms in damp woodland in my mind. I stop work at five and leave the house with a penknife, a magnifying glass and a bag and get in the car for a trip to my nearest section of Dartmoor.

I’m on the trail of a rare fungus. It’s a mushroom which only grows as a parasite on another mushroom. Nature is freakishly odd, right? I’ve seen it twice before in the same location so I’m off for a walk to see if it’s that time of year again. It’s called, very aptly, Boletus parasiticus and it grows on Earthballs, Scleroderma citrinum. Here’s what Earthballs look like:

Earthballs – forty years ago in my nature notebooks

The Collins Guide to Mushrooms and Toadstools says Boletus parasiticus is found September to October and is ‘occasional’. Roger Philips’s Mushrooms and other fungi of Great Britain and Europe says Boletus parasiticus‘s season is autumn and it is ‘rare’. None of my many other fungus books even mention that the species exists. A quick Internet search reveals that it’s now called Pseudoboletus parasiticus. Someone’s obviously been doing a bit of DNA analysis and decided it’s not as closely related to other Boletes as people first thought.

As I walk into the woodland there’s the first sign of autumn fungi, with occasional Blushers on the forest floor. The Blusher, Amanita rubescens, is a beautiful and very common mushroom. It’s a close relative of the Death Cap, Amanita phalloides which kills you slowly with multiple organ failure; even if you have less than a mouthful and are a fit and healthy adult. They look beautiful. 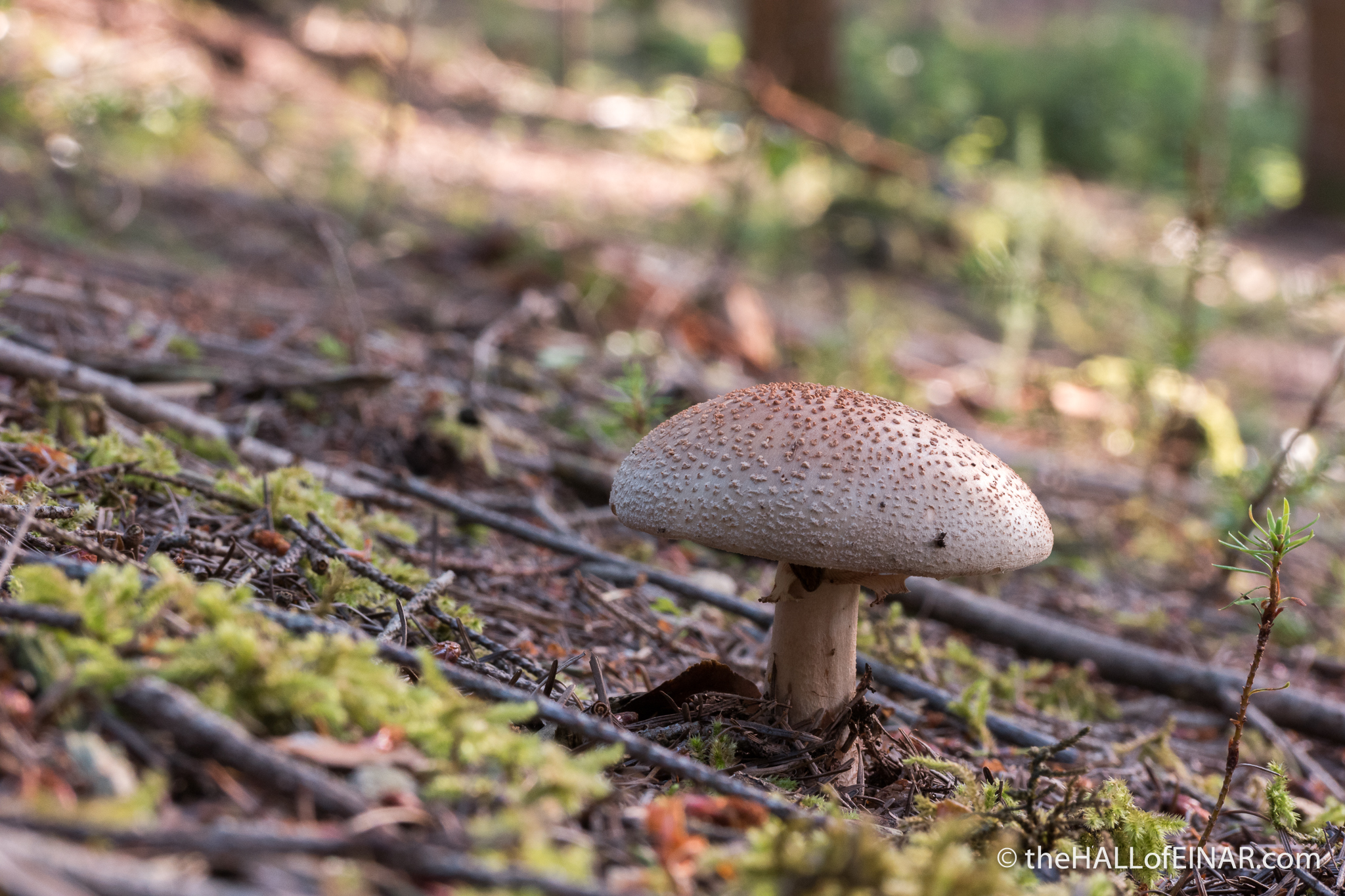 The Blusher has a distinctive swollen base, a ‘veil’ around its stem and the cracked remains of the covering veil all over its cap. It has beautiful gills underneath which are all white. Its flesh becomes pink when bruised. I’m told it’s edible but only when cooked and the water you cook it in must be thrown away.

It’s a species I found and identified over forty years ago and wrote about in my nature notebooks:

The Blusher – forty years ago in my nature notebooks

It’s still just as fascinating to me today:

Maybe I won’t be having these for my tea.

Further on there’s another Amanita species. The time it’s the Tawny Grisette, Amanita fulva. This one has escaped being trampled on by a Dartmoor pony: 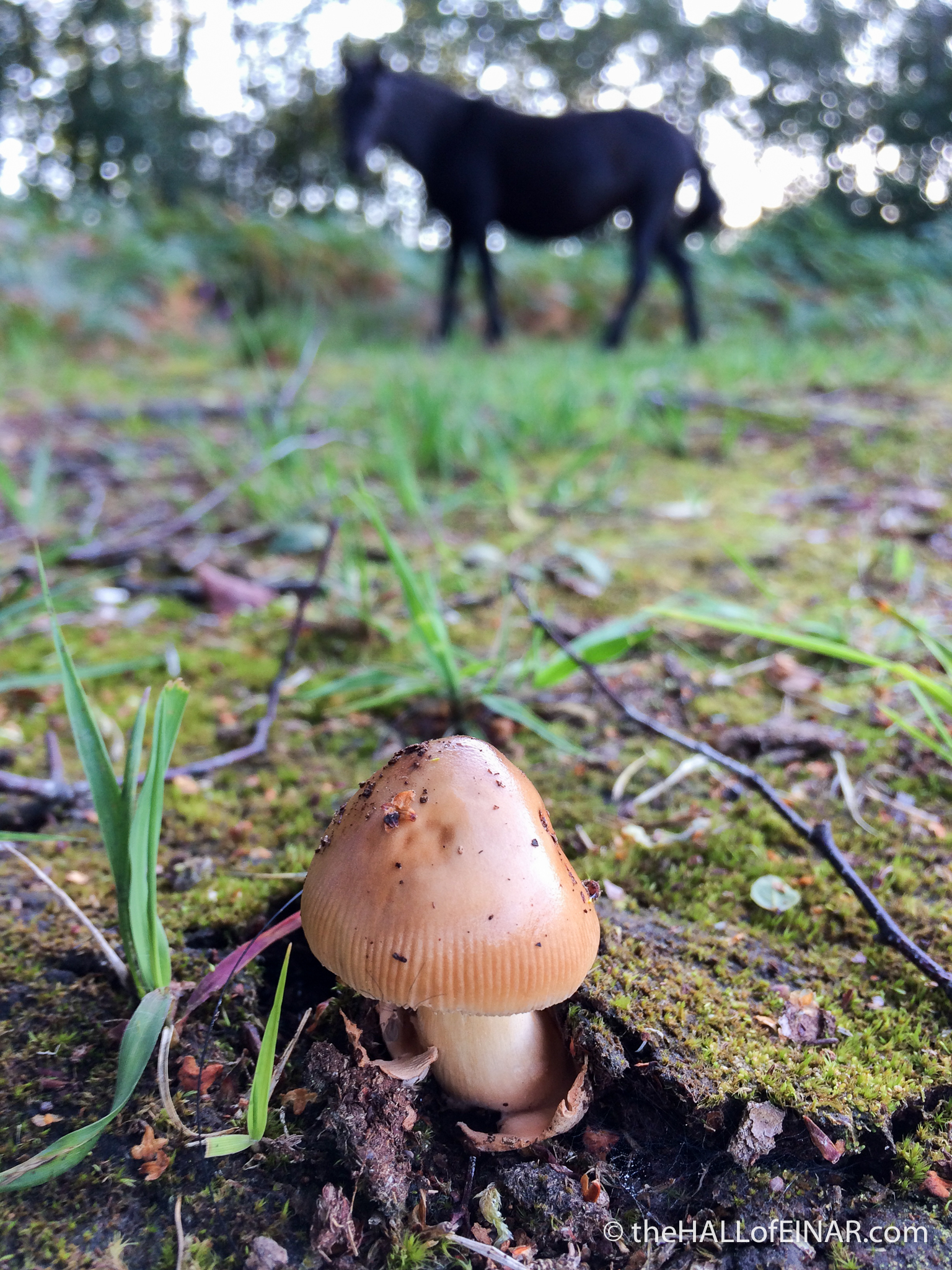 It’s another common species. I’m persuaded by the first-nature.com notes which say: “This is an edible mushroom but not highly prized; however, as the genus Amanita contains some of the most deadly poisonous of all fungi only the most expert or the most foolhardy of fungus foragers eat any of the ringless amanitas.”

Maybe I won’t be having these for my tea either. 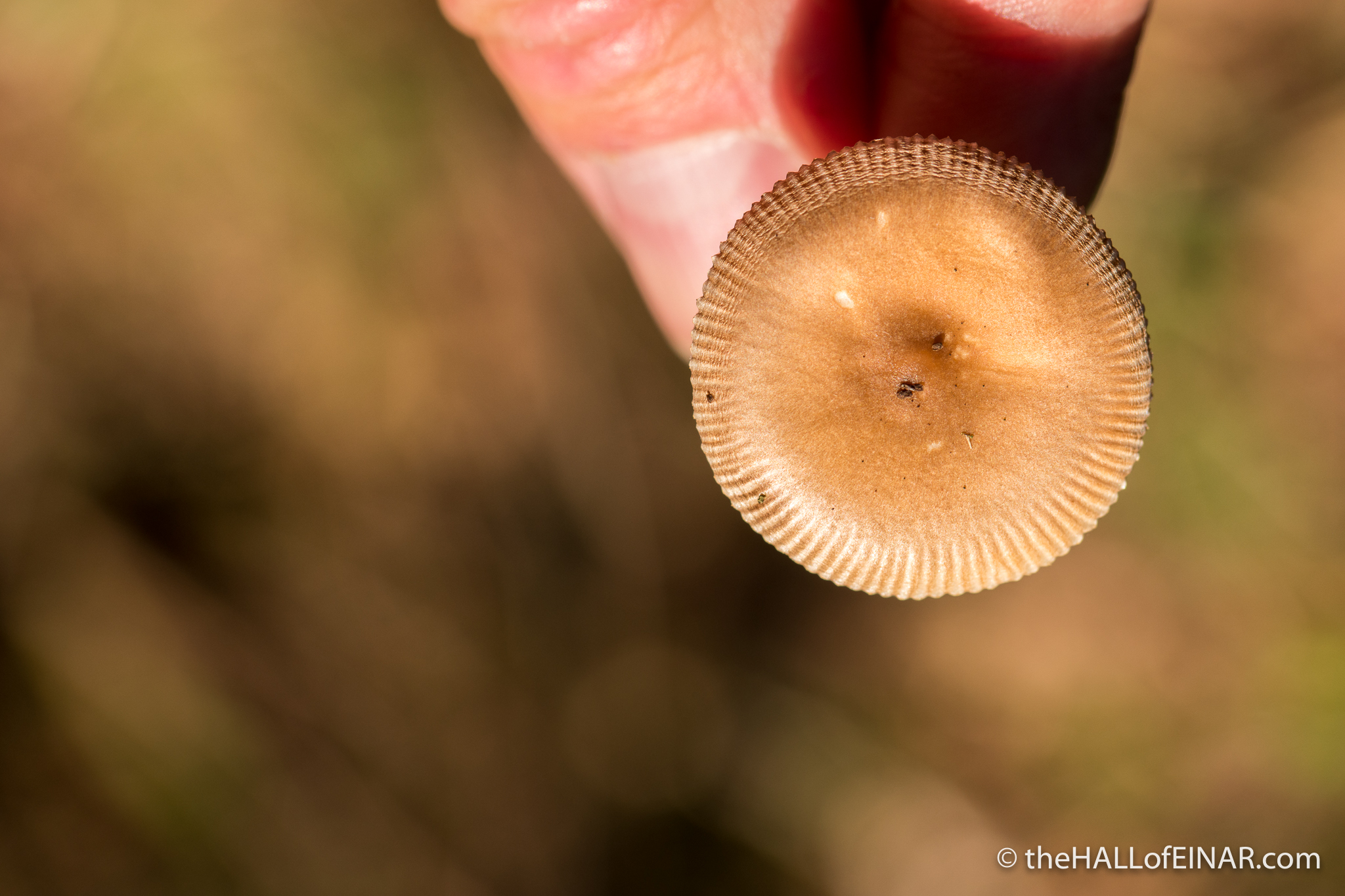 Further along my walk is a Bolete. It’s not Boletus parasiticus, it’s Boletus calopus, or, as it’s now called Caloboletus calopus. This one is beautiful: 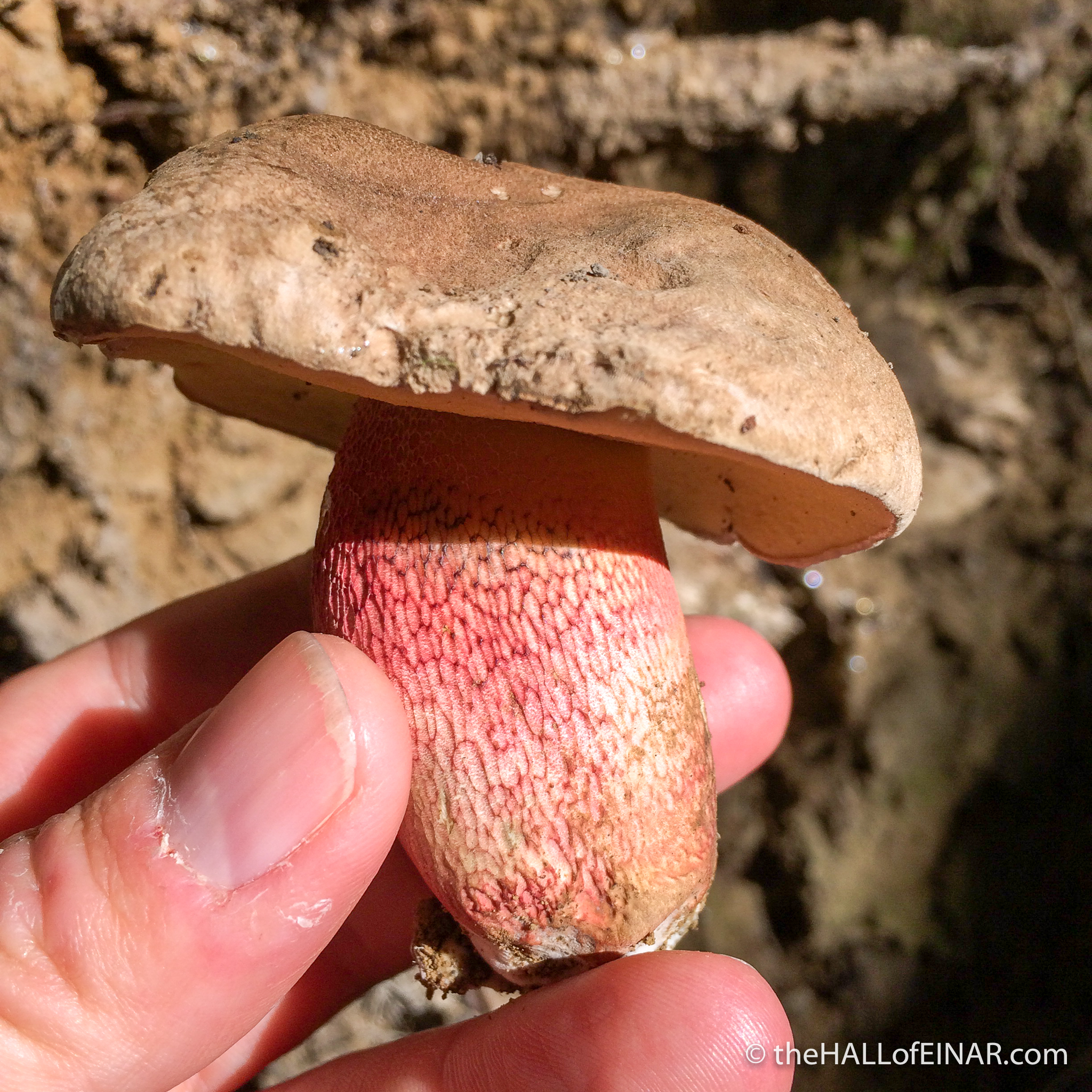 The Amanitas like The Blusher and the Tawny Grisette all have gills, a series of radial flap-like structures just like cultivated, shop-bought mushrooms. All Boletes, however, have pores underneath their caps, a tight group of small holes through which their fertile spores fall.

Having a stem to raise you up and a cap to keep you dry is such a sensible evolutionary strategy it must have evolved several times. 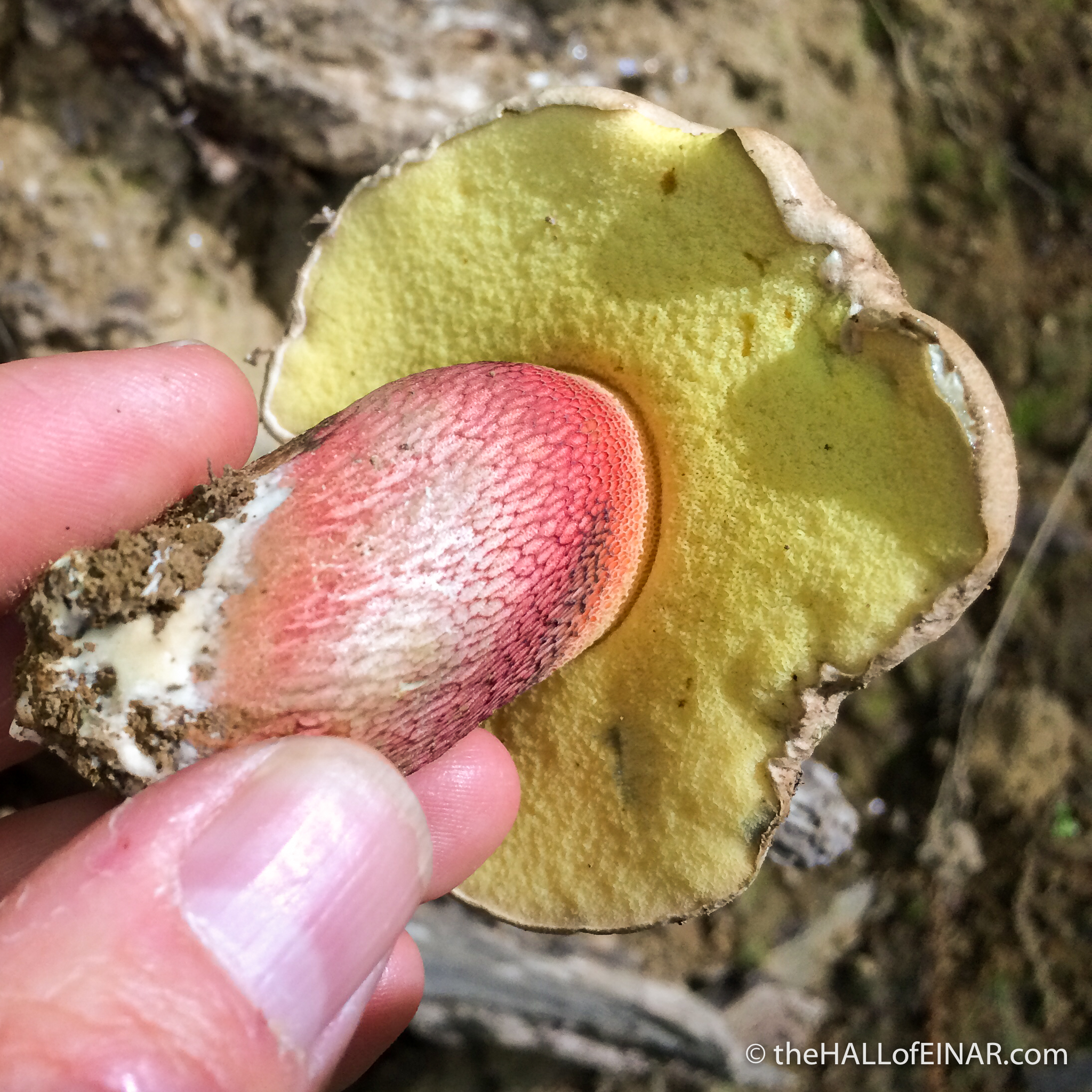 I can tell that this is Caloboletus calopus because there is no other species with brown cap, yellow flesh and a red stem which has the net-like pattern over it. Reticulation, it’s called. Its common name is the The Bitter Beech Bolete. To add to the air of mystery surrounding this mushroom, rather than bruising or staining pink like The Blusher, this one turns blue when it’s cut:

Now that is seriously other-worldly.

In the woods is a Russula, or, as I’ve got to call them all now, a Brittlegill. This one is Blackish-purple. Could it be the Purple Brittlegill, Russula atropurpurea?

There are so many species of Russulas and many of them are red, purple, reddish-purple, black, or blackish-purple that I’d have to buy or borrow specific ‘keys’, books with page after page of “if it’s like this then go to page such-and-such and if it’s not go to page…” that I think I’ll just be happy with Purple Brittlegill for now.

Further up the hill there’s a yellow Brittlegill:

I suspect that this is a common Russula, Russula ochroleuca. It used to be called the Common Yellow Russula. That makes sense to me. Now it’s called the Ochre Brittlegill. Try saying that five times quickly.

There’s also a strange zoned fungus over on the mossy bank. It’s velvety: 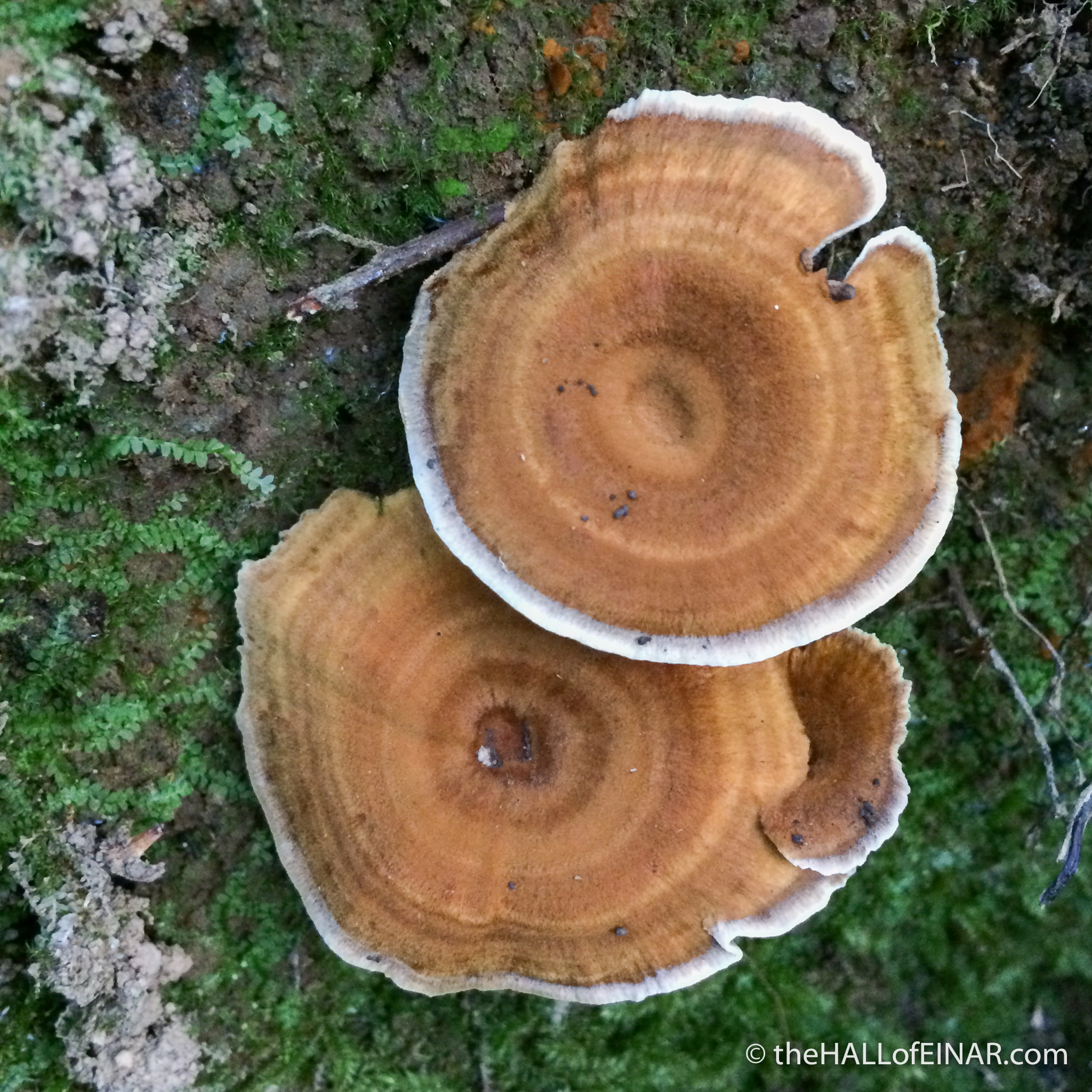 It’s got pores on the underside and amazing concentric circles of colour on the upper side.

I have to wait until I get home before someone helpfully suggests it might to Coltricia perennis. Maybe it is. Its common name is Tiger’s Eye. It does have a resemblance to the semi-precious stone of the same name.

Across the path I can see a series of bright apricot-coloured mushrooms. That can only mean two things: They are beautiful, delicious Chanterelles which are perfect with lightly scrambled eggs, or they are the False Chanterelle which is said to cause alarming hallucinogenic symptoms. That’s when the magnifying glass comes in handy. Thankfully they are Chanterelles, Cantharellus cibarius.

I cut them cleanly with my penknife and put them in my bag. I can almost taste them now. I only take a few and leave many behind so they will reproduce freely.

In an area with oak trees I spot some Milk Caps. I can tell it’s a milk Cap straight away because, helpfully, this one has a drop or two of white ‘milk’ on its cap where it’s been damaged. Milk Caps or Lactarius as I still think of them, are fascinating because if you damage them they don’t turn pink or blue, they appear to bleed white milk, just like a rubber tree would. I know; will fungal wonders never cease? 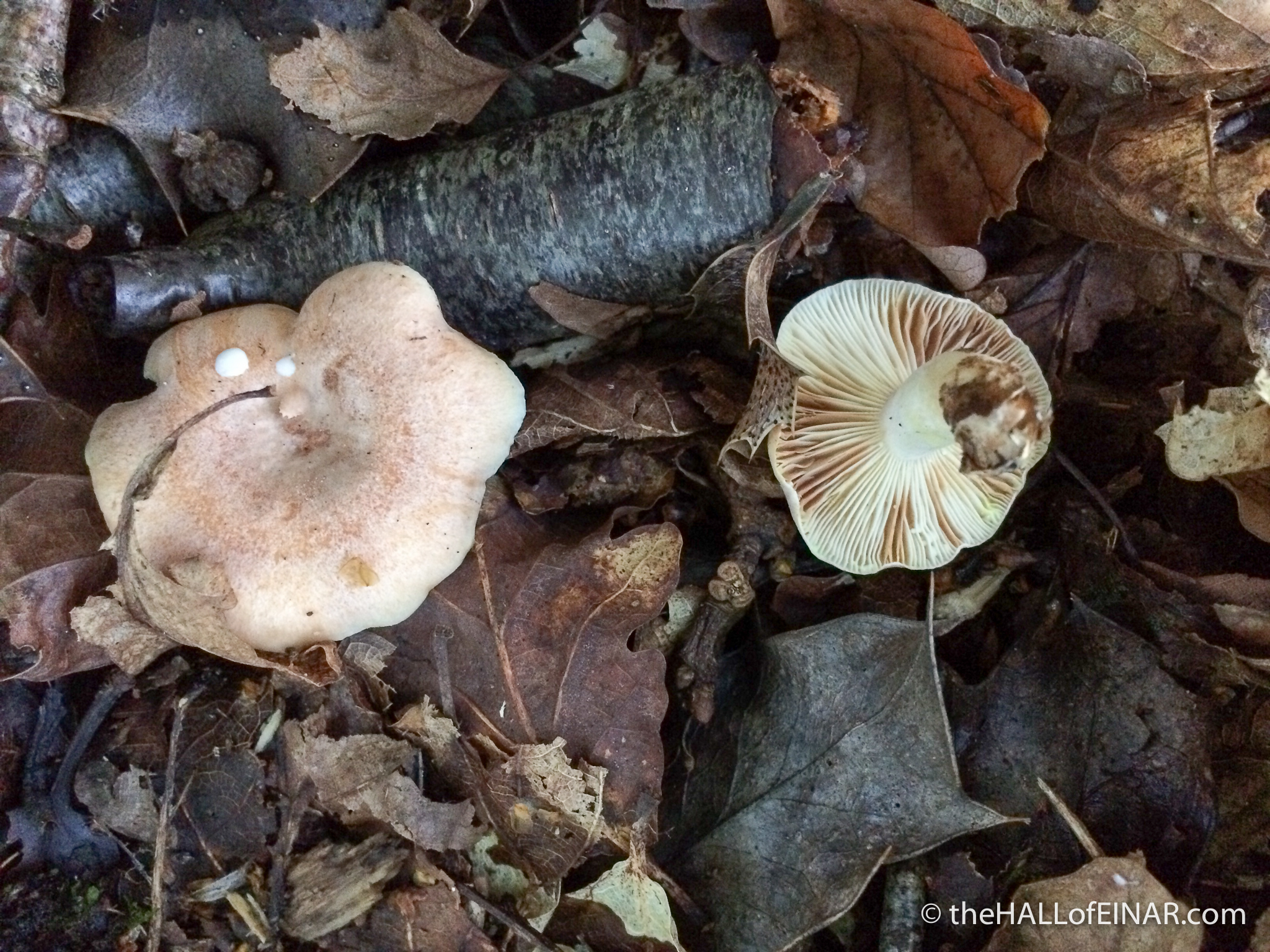 Fungi have lives we barely understand at all. They grow underground and through the leaf-litter with microscopic threads called mycelia. Many have such a close association with specific plants that they grow not just alongside but inside them. Without their companion plant they would not survive. To identify many mushrooms it is first important to identify the trees under which they grow. This is an oak, I know that much, so maybe this is the Oak Milk-cap Lactarius quietus? Back home I look it up. It’s no longer known as the Oak Milk-cap, it’s now the Oakbug Milkcap. Where did the bug come from? Apparently the smell is ‘Slightly oily or suggesting bugs’. I really must sniff my mushrooms more if I’m going to be successful identifying them.

Then I’m finally at the spot where the parasitic boletus fruits. I can see lots of Earthballs, on which they grow, but I’m stopped in my tracks by two Dartmoor ponies who are very curious and steam their noses at me. They are wild and are here deliberately to keep the vegetation down. Personally I’d rather have a forest emerge here than keep this area of heathland.

Then I see it: 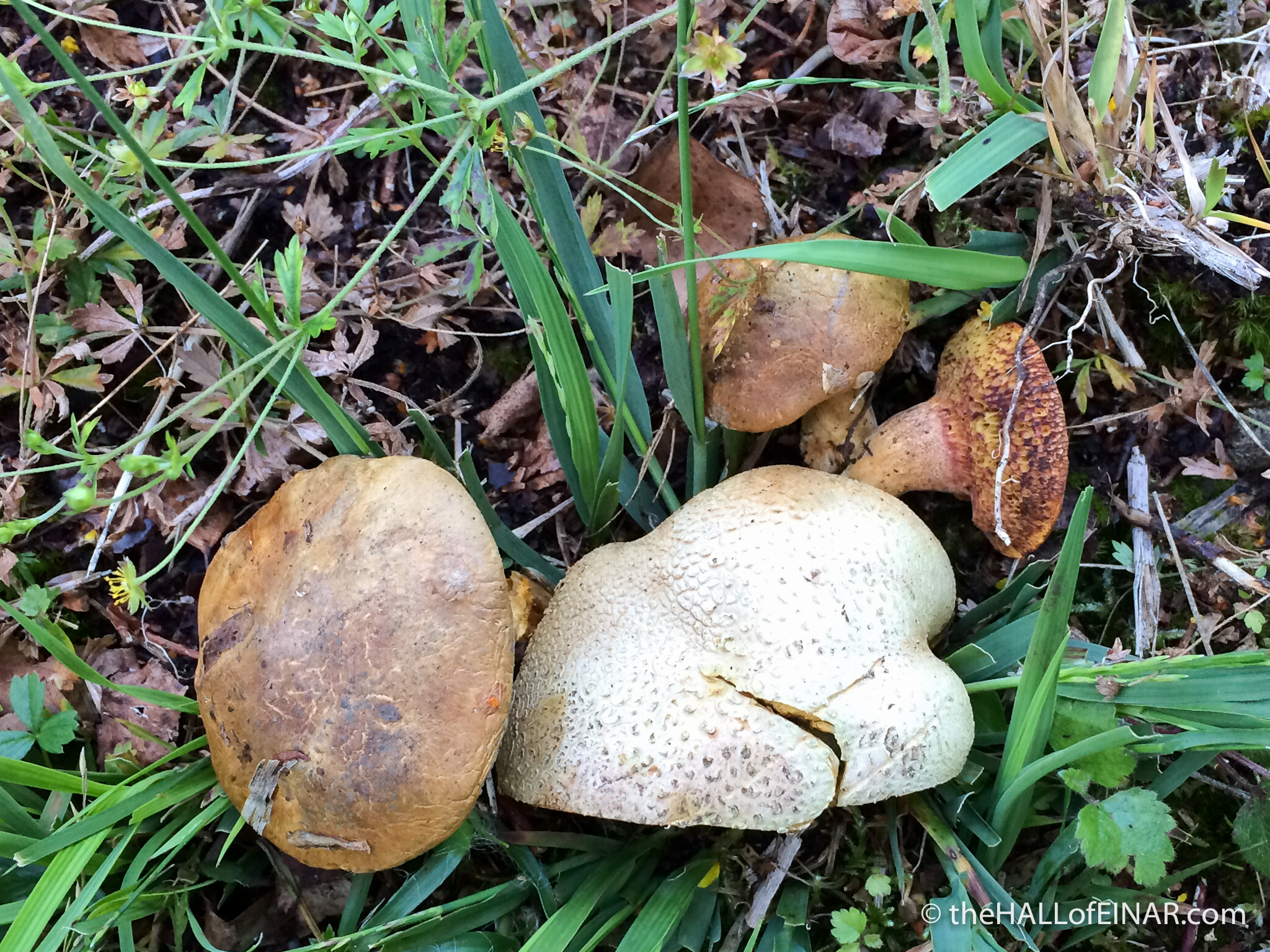 An Earthball with parasitic boletes growing out of it. I love them. How rare; how freakishly unusual. 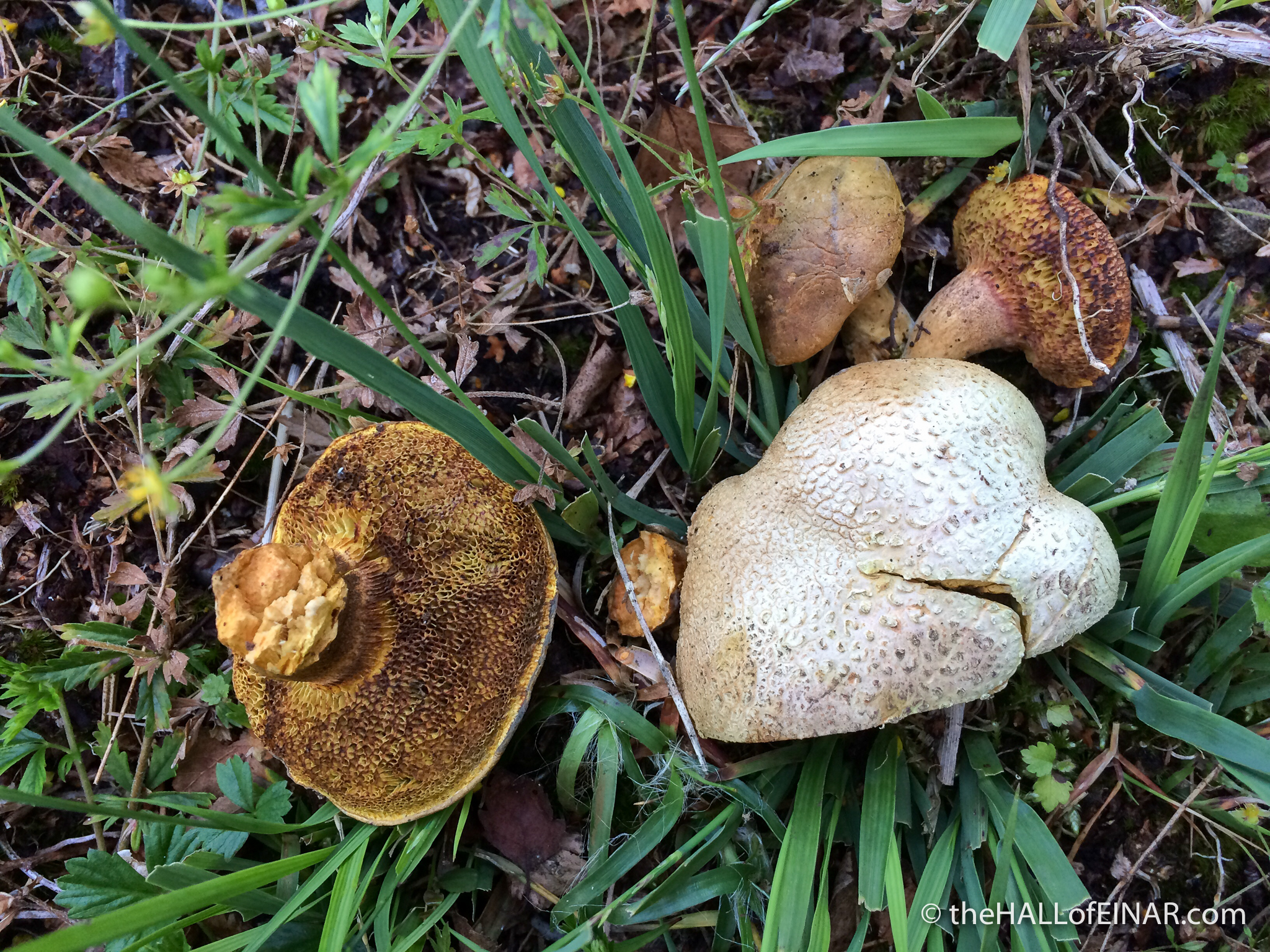 Several Earthballs nearby have been dislodged by the ponies so I get one and cut it in half: 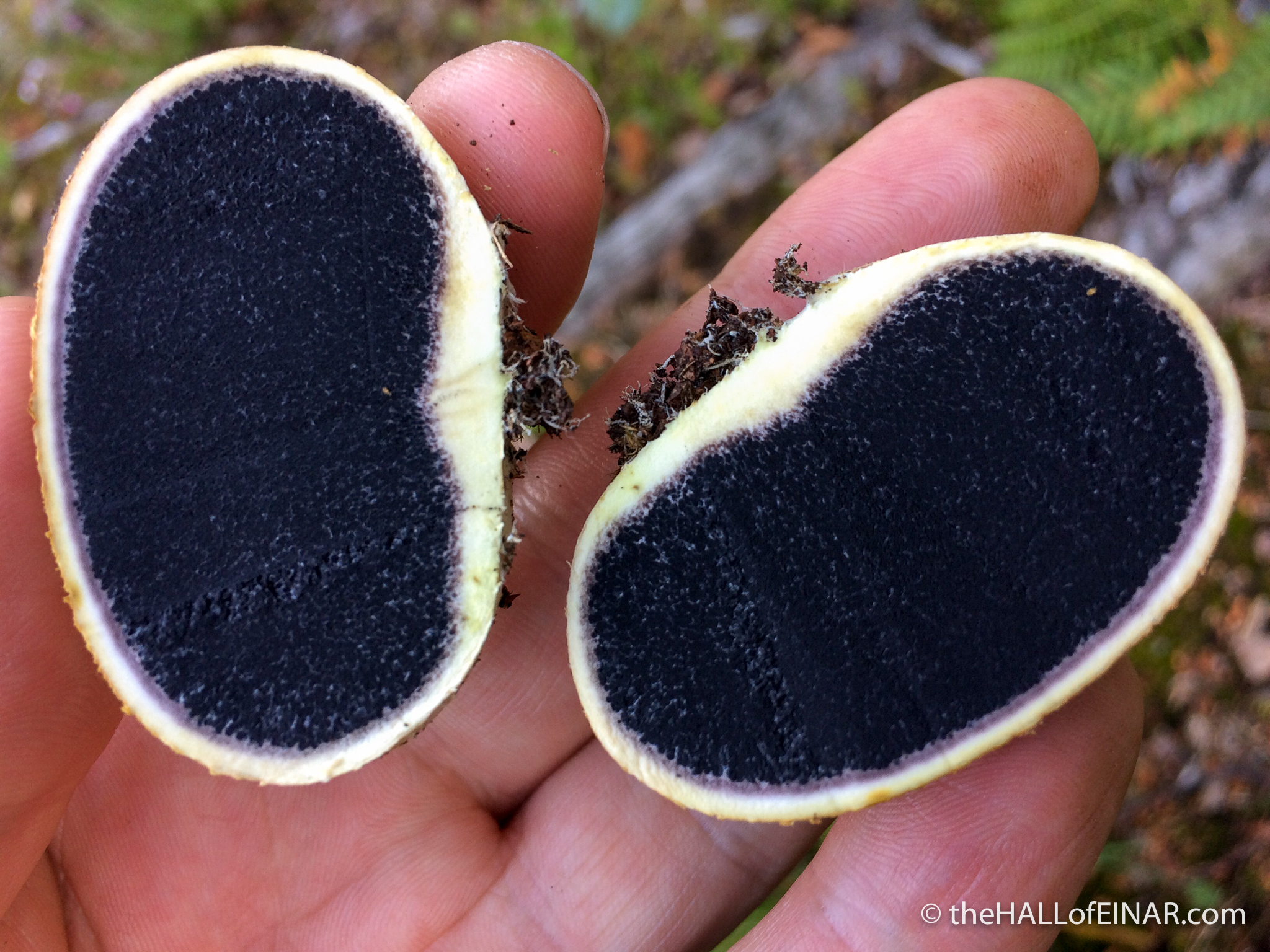 It’s so luxuriantly black inside it’s almost like velvet.

It’s time to go home now. I’m hungry and I’ve been out for several hours. I turn a corner and a huge deer bounds away from me, bouncing high over the bracken. Then I see it. It’s calling my name. It’s a Cep, a Porcino, a Penny Bun, a Boletus edulis. It’s a… 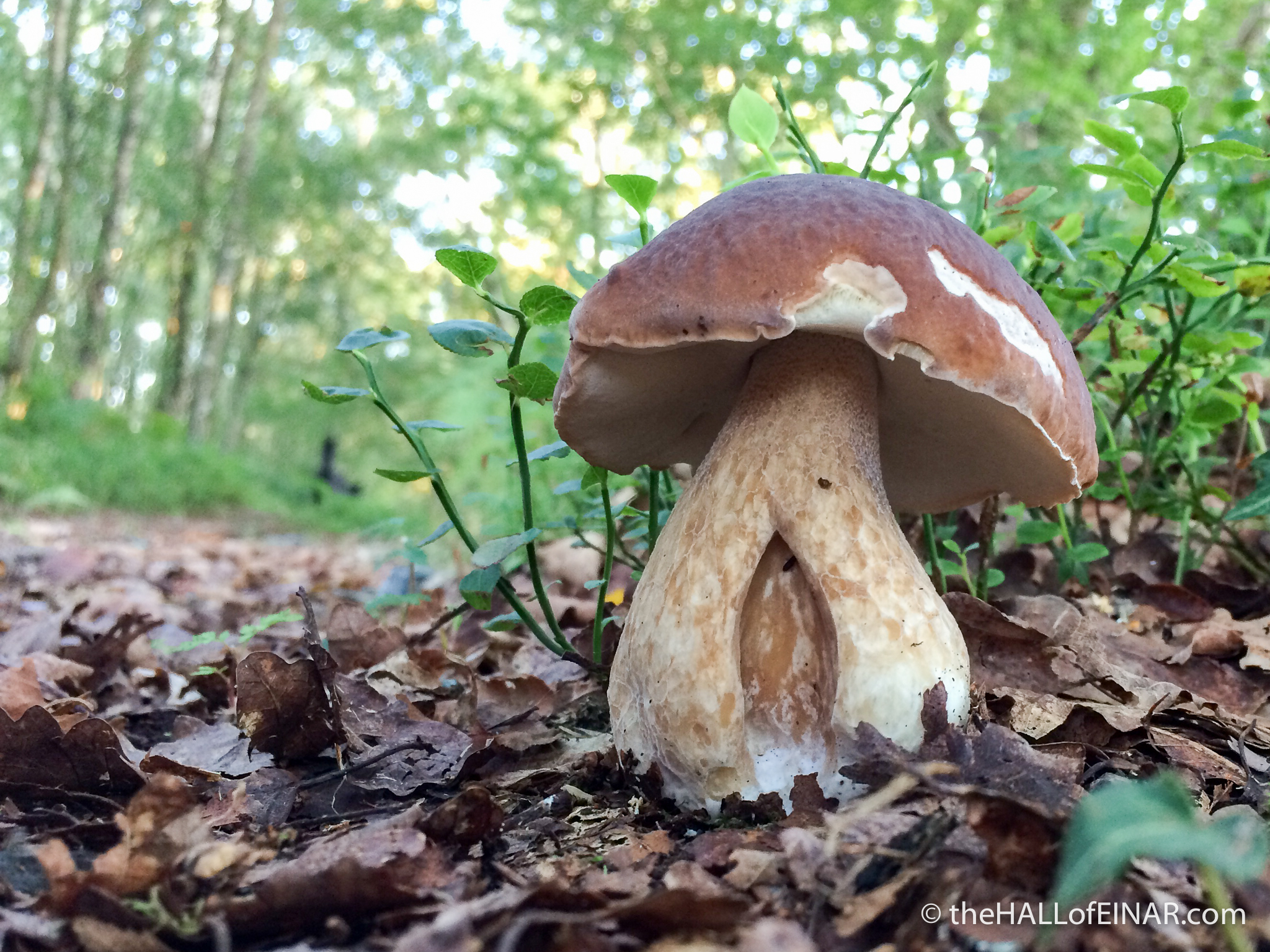 At home I could smell the cold and the damp of autumn; it brought me here. Now I’m on Dartmoor I can smell the warm scents of lightly scrambled eggs with Chanterelles and of Cep in a sizzling mixture of good olive oil and butter.

I go home with renewed vigour and a spring in my step.