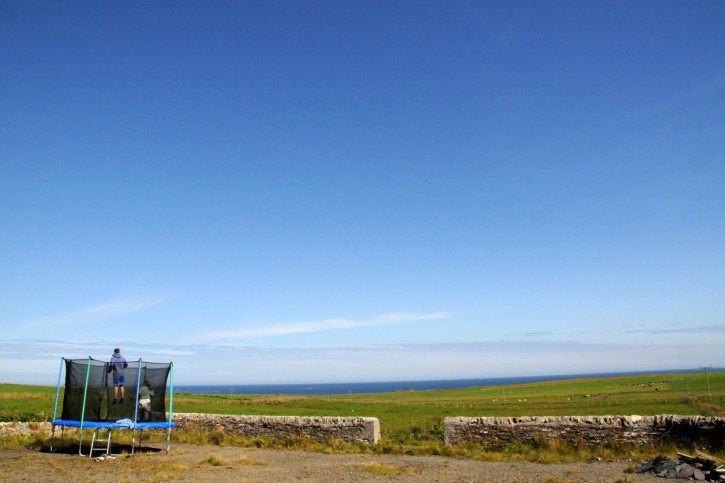 “How many years can a mountain exist, Before it’s washed to the sea?”

by Bob Dylan from Blowin’ in the Wind.

It takes three of us over an hour to assemble it. The instructions are good, but it’s quite heavy and takes a fair amount of manouvering to get all the pieces in alignment. The base alone weighs 55 kg and then there’s the safety net that surrounds it with heavy galvanised steel poles. Finally the trampoline is ready and it stands in the old playground of our house which was once a school. It’s fourteen feet wide. My children adore it.

A few days later I’m woken by a noise. It’s insistent and I can’t understand what it is. There’s a beeping, an insistent deep beeping. I look around the house, sleepy, and fail to find where it’s coming from. It’s coming from outside; there’s a car in our playground beeping to get our attention. I rush outside to find our elderly neighbour has driven all the way across to see us. He says something to me. I have absolutely no idea what he’s just said. The combination of my having just woken up, being stood outside in a gale and his accent all conspire to leave me none-the-wiser. He says it again. I apologise to him saying I just can’t tell what he’s saying. He repeats it and repeats it. I understand. “Your trampoline is away, ” he says.

The trampoline has blown away. I look down the road and see it pinned against a farmer’s field, just like a piece of tumbleweed.  It only takes us half the time to disassemble it.

In Orkney the answer is blowin’ in the wind.

3 Responses to "The Answer My Friend"