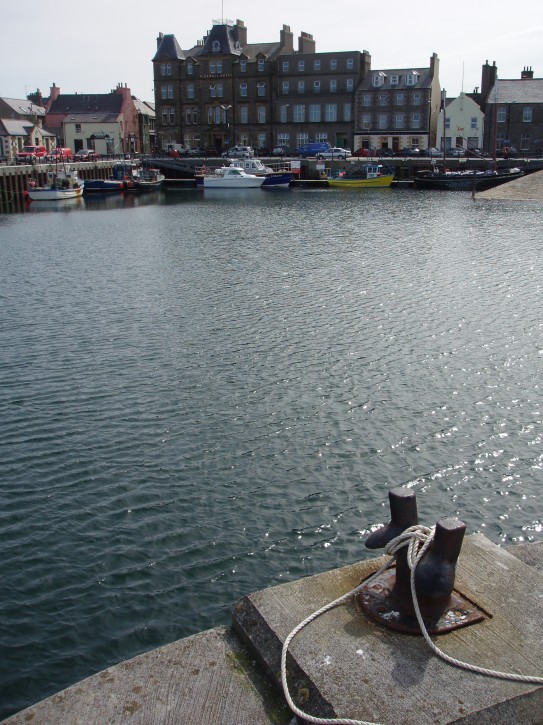 It appears that there are no pubs in Kirkwall, only hotels with restaurants and bars.

It is the morning, and I’m getting ready for my first day’s work in Orkney, the first of four days. I pop my head into the bar of my hotel and ask the young barman whether they have any real ales. He says they do but that it’s off at the moment and they’re expecting a delivery of Red MacGregor later. I leave for work with the anticipation of my first taste of Orkney Breweries’ real ale to come. Something to savour.

At the end of the day I get changed, get a book to read and go to the bar. He’s still there. “Sorry,” he says, “They did deliver, but it’s still off. We’ve sent the Red MacGregor back. We’ve got it in bottles if you want?” I decline. I haven’t travelled the full length of the country to drink a bottle of beer that I could have drunk at home. Only a real pint of real ale brewed in Orkney and drunk in Orkney in an Orkney hotel will do. He tells me the name of another hotel a few hundred yards down The Shore and says they’ll have it. I go back to my room and put on my salopettes, ski jacket and hiking boots for the journey. It is April in Orkney, after all.

I walk into the wind along The Shore to the hotel. I’m laughing at myself – I brought an umbrella with me, which was very good preparation for the rain but utterly useless in the wind. I go inside the public bar. Although not full, it is by no means empty, but I’ve got the rather eerie sense that it’s got quieter since I stepped inside. I walk towards the bar unzipping my coat in the heat and see three large men eyeing me from the bar. The middle one, a hairy man with large biceps and a tattoo or two turns to face me and exclaims, “Welcome to Orkney!” I carry on walking and approach him, regretting it already as I say weakly, “So how do you know I’m not from round here then?” He replies, “Well, you’re sober aren’t you?” We laugh and I spend the rest of the evening listening to their stories of people invited to leave the island at the end of the jetty, the involvement of Social Services, the perils of domestic violence and issues of child custody. The Red MacGregor was off. They said they had it in bottles but, well you know what I think of that. I had a pint of Dark Island instead. It’s still made by Orkney Breweries and I did drink it in Orkney and in an Orkney hotel too. Red MacGregor could wait.

“The nose on this beer is ripe and fruity with slightly vinous esters, married to interesting hop notes – the colour of a glorious red ruby wine.”