I’ve been in and around Orkney for ten years and never been to some of the outer islands. Being in Westray means a trip to Sanday or North Ronaldsay or Stronsay requires a trip back to Kirkwall, the capital and transport hub, before setting off again to one of the other islands. That would mean a minimum of a night away and a six hour round trip. I can get to London and back from South Devon in far less time. Actually, I can fly to Rome in the same time.

The island of North Ronaldsay holds a special place in my heart, even though I’ve never been there. It’s the only light in the black I saw one pitch black November night ten years ago:

A Light in the Black

I’ve been told that North Ronaldsay is a dead or dying island. That population loss, the lack of children, the difficulty of hard work and low farming incomes and the attractions of other places have gradually leached the life from it. I want to see for myself.

Every summer Orkney Ferries run their Special Sunday Excursions. These trips finally join up the islands and allow a meaningful day trip. The Puffin Whisperer reminds me that there’s one on Sunday so we arrange to go to North Ronaldsay with our friends. There’s also the added bonus that the Old Beacon from 1789 is photographed in The Islands of Orkney Magazine without the huge scaffolding which has blighted it for years. I’ve only ever seen it from the air before and it looked magnificent:

Scaffolding follows me wherever I go

And then it still had the scaffolding on. How great will it look all newly renovated like in the magazine photos?

It’ll be perfect for photography. We must go.

At Rapness we get on the ferry Earl Thorfin. I look back at Rapness Pier from onboard. It’s all hard hats and hi-vis jackets: 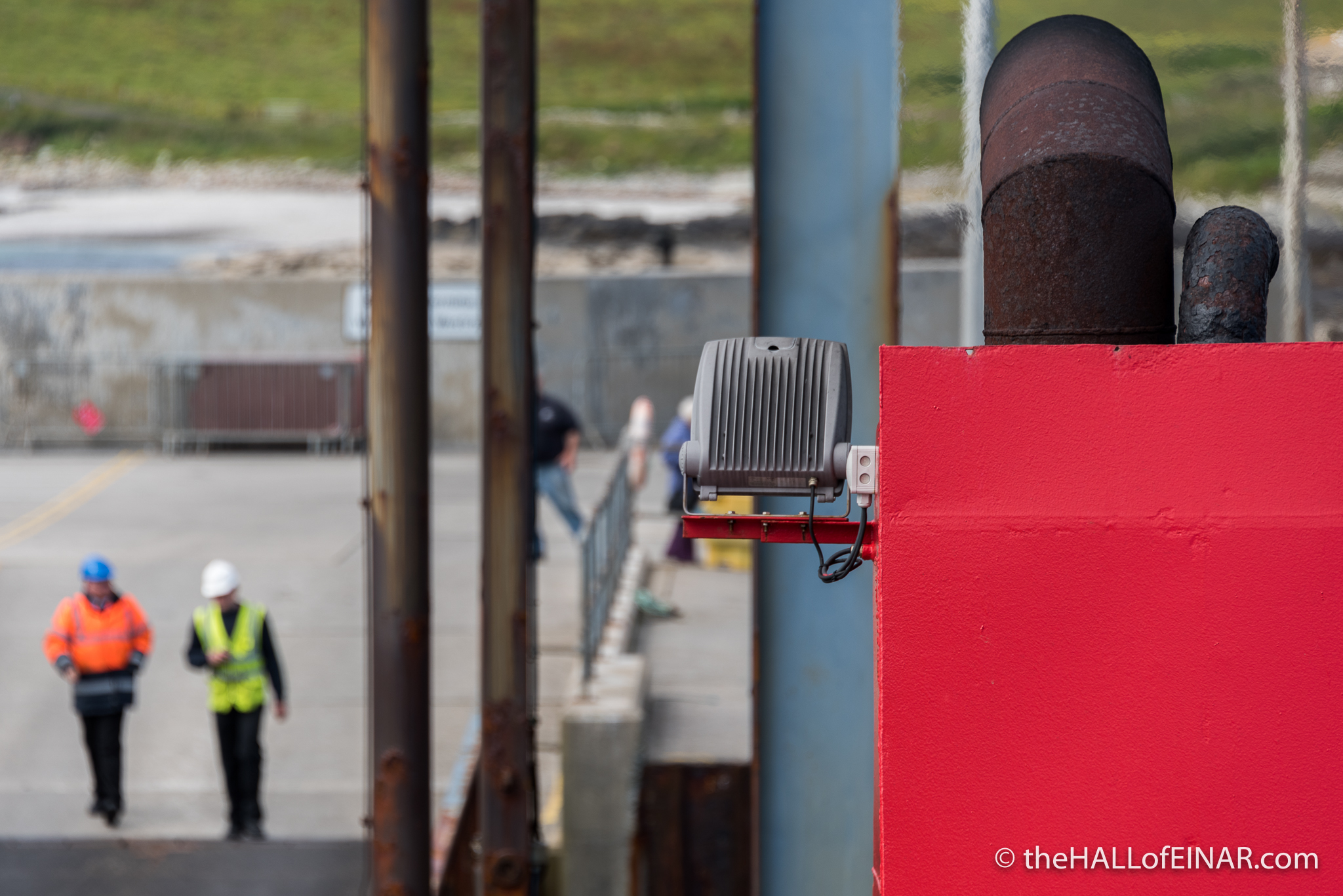 Rapness Pier is a fabulous structure and must take immense forces from the wind and the waves. It seems solid enough though: 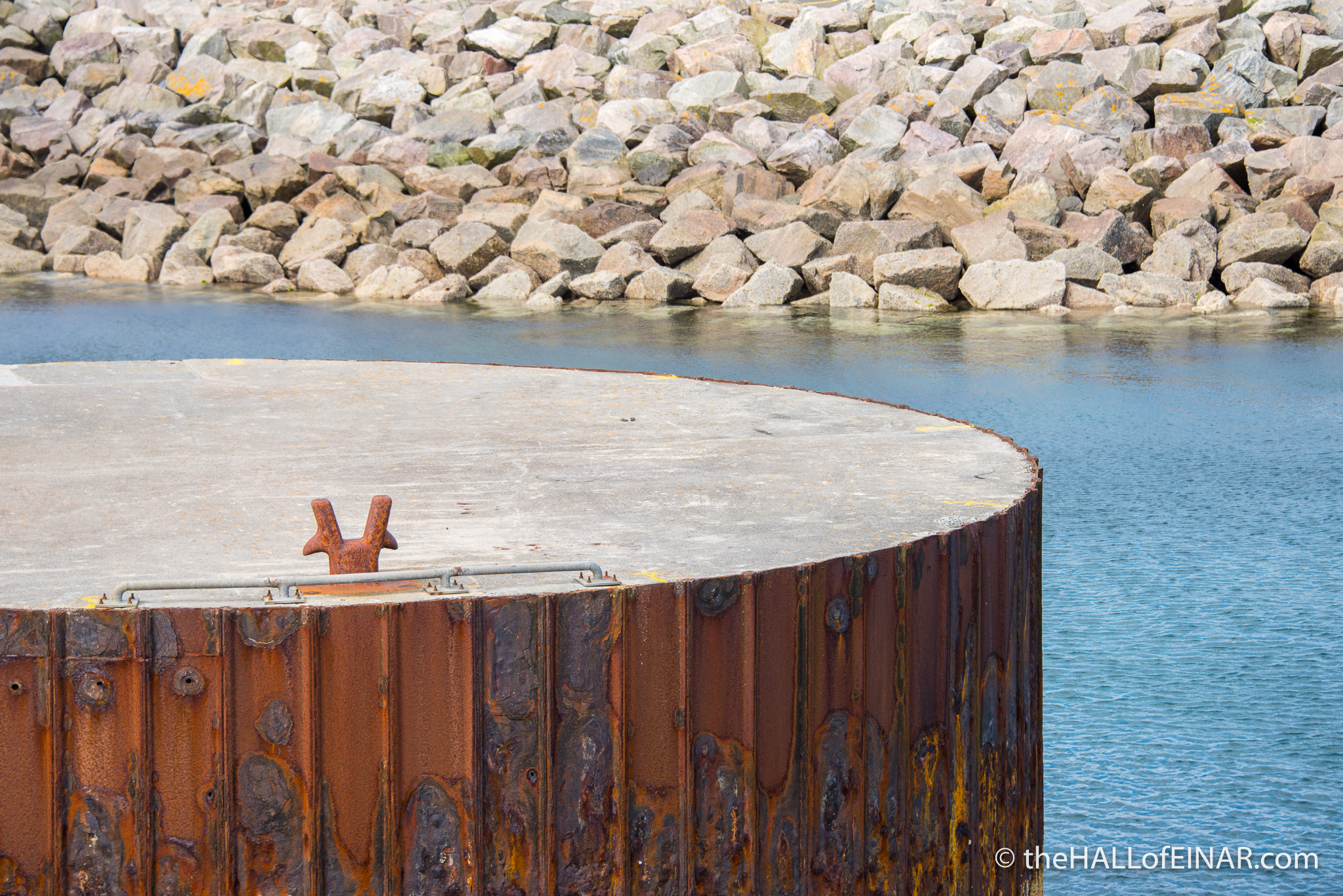 Even though it is a bit rusty.

In Rapness I can just see the quarry with its dark line of oil-bearing shale sandwiched between the layers of rock: 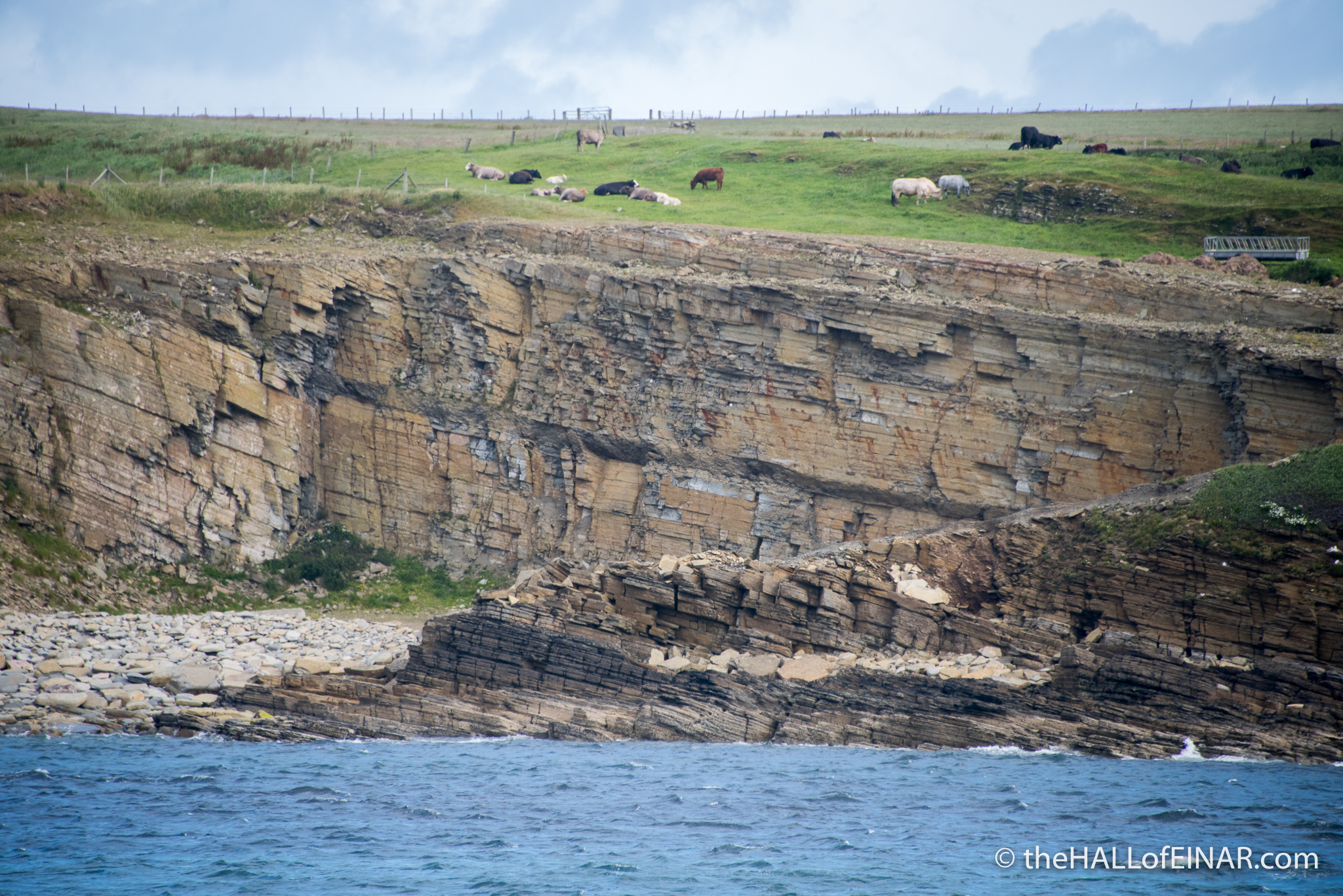 If there was more I’m sure we would be fracking for it.

The Earl Thorfinn is a utilitarian ferry with bright colours and thick paint to protect it:

The cars on deck are accompanied by these webbing and rope structures on the car deck. I stare at them as I wonder what they are for: 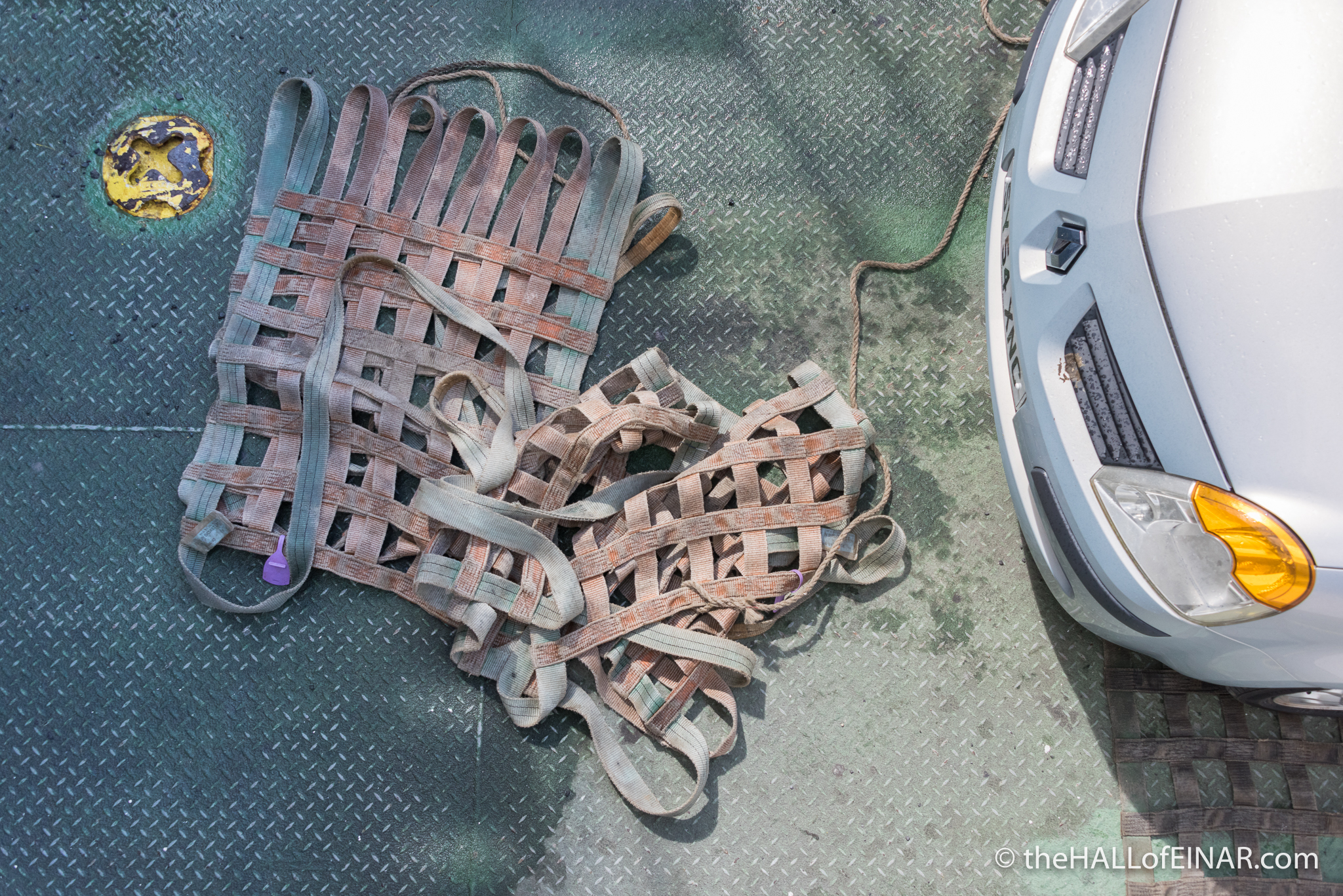 Thankfully it’s a smooth crossing, which wasn’t the case for the first leg done by those people travelling from Kirkwall to Westray. Apparently the side swell was so great that vehicles started to move on deck. That’s always a bit worrying. You don’t want your car to start the journey with square corners and end it with round ones.

When we arrive there’s a group of children on tiny bicycles who are going to cycle to the lighthouse at the other end of the island. For us, it’s a simple hop off the ferry and hop on to a minibus to the lighthouse: 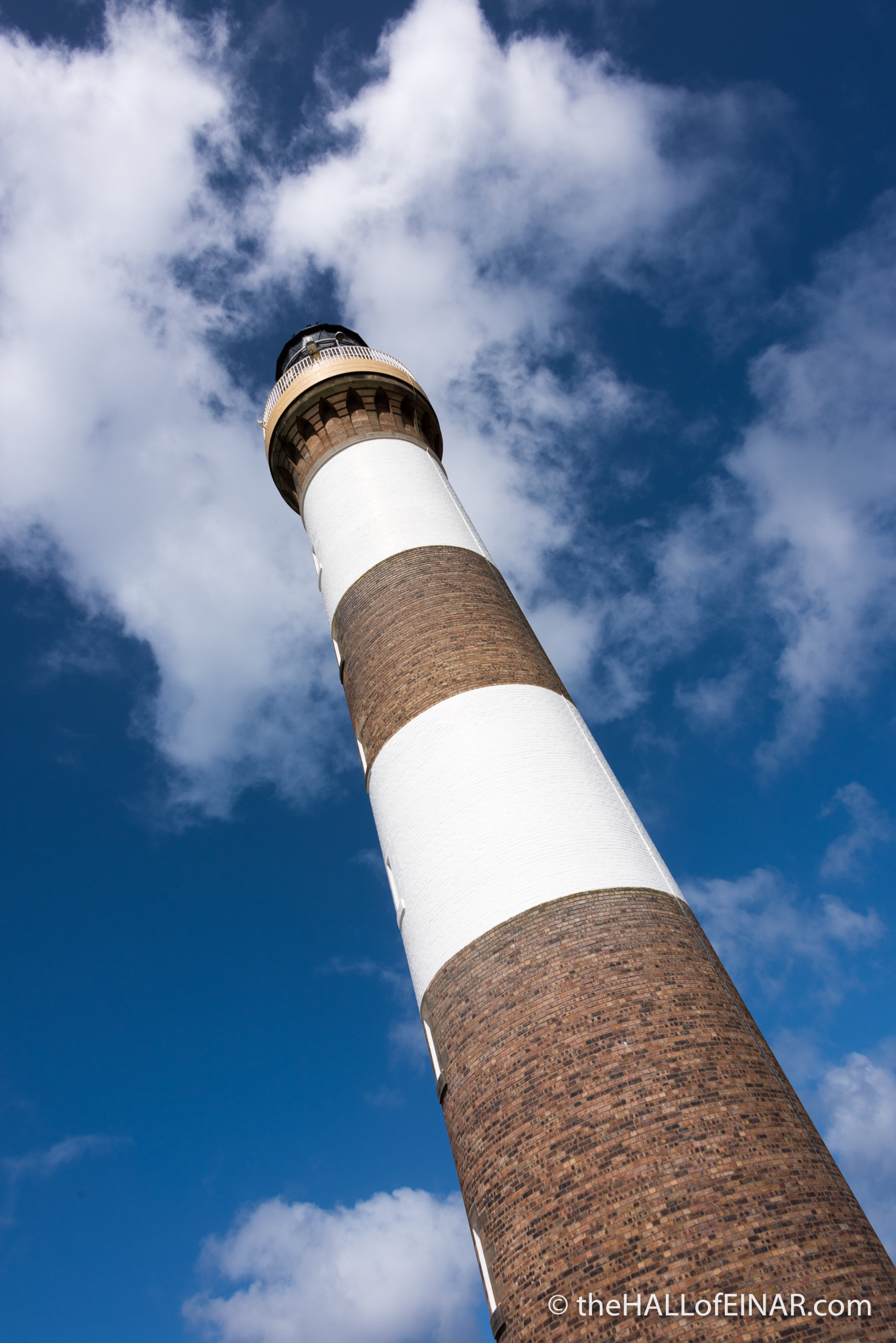 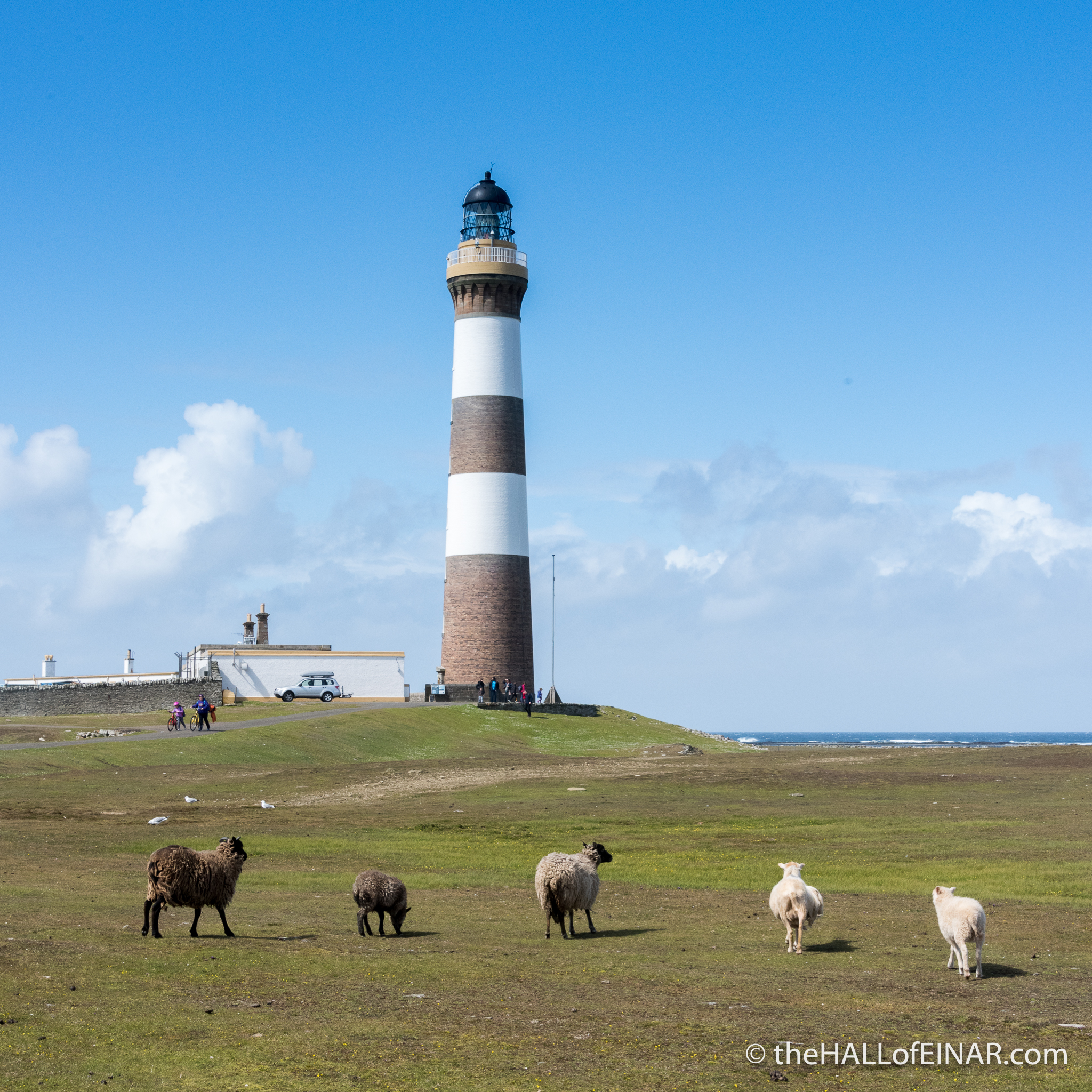 There are communally-grazed sheep all over the island. They don’t always arrange themselves into tonal gradations but these five decided to.

I count 175 steps up the lighthouse, but I could be wrong because I was also chatting as we went. Inside the lighthouse is fascinating.

There are two 250 Watt lightbulbs. I’m shocked at how small they are. I can see that from my bedroom window?

The view from the top is pretty spectacular with stone sheep pens – and a view of the children on their bicycles who have just made it to the lighthouse as we have made it to the top:

We are all charmed by Sarah and Billy who are our Northern Lighthouse Board Guide and Keeper. They do such a great job to make us welcome.

Down the steps again (although I didn’t count them this time) we walk to one of the sheep pens we’ve spied from the top and sit inside for a picnic where I discovered something life changing and unexpected; that a small glass of red wine and a KitKat go together really, really well. Then it’s time to see the Old Beacon. Hold on, what’s this? Why has it still got scaffolding on it? That’s not what it looks like in the marketing brochure:

I’ve been lured here under false pretences. Oh well. Maybe next year? Or the year after that. Or…

As we walk back I notice we’re next to an Arctic Tern colony. It’s illegal to disturb any bird in Schedule 1 of the Wildlife and Countryside Act 1981 and I’m sure Arctic Terns must be on that list; they are so precious. I check and I’m shocked to find they are only protected in Northern Ireland, the Republic of Ireland and the Isle of Man. There you need a specific licence or permit to approach an active nest or an adult with dependent young. Surely that should be the case here too?

I refuse to go near them but one comes and flies over me: 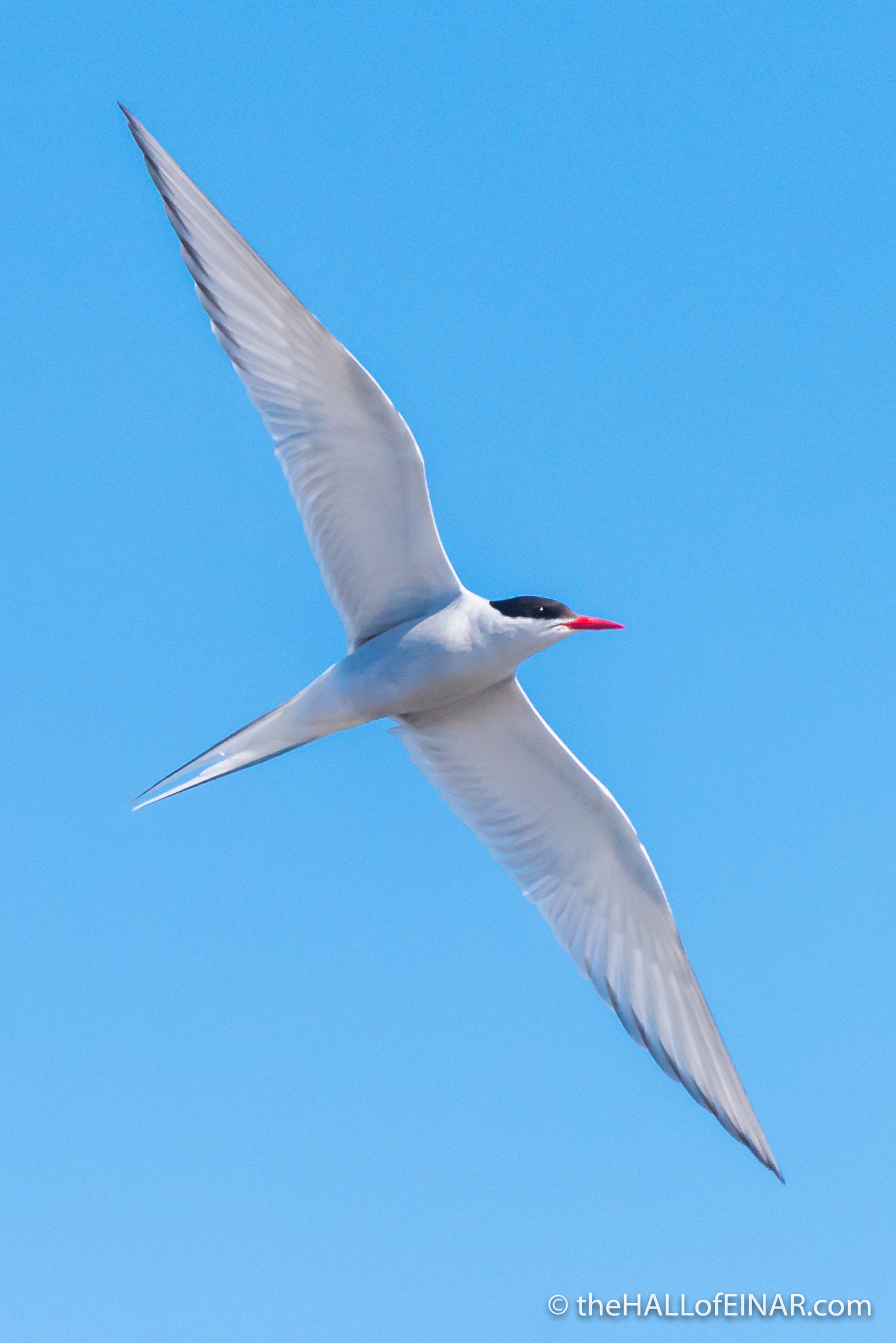 Then others follow as they fly from the beach to the field, including a juvenile without the fully-black head cap:

They are elegant beyond measure.

I’ve forgotten all about the scaffolding now. Here’s a wonder of nature to appreciate: 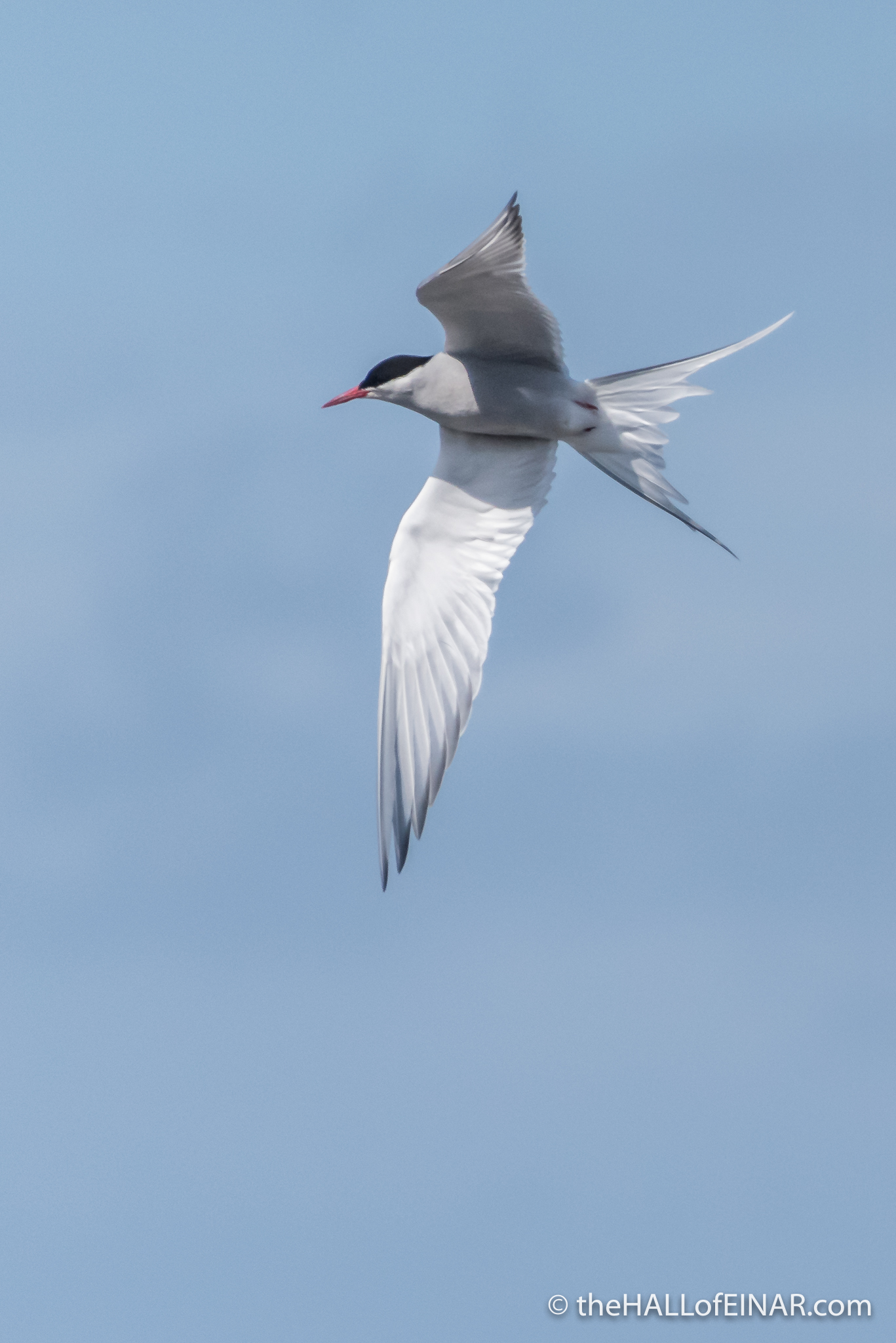 We are going to be too late to get the ferry, and since it’s the only ferry back this year we are kindly offered a lift by two local men. The typical Orkney generosity of spirit is alive and well here too.

Back at the Pier I can see the skips of rubbish and the pile of used electronics waiting to be shipped off the island. Just imagine the mountain of redundant consumer goods we produce, not just by the 50 islanders here but by the 65 million of us in the United Kingdom. Personally I’d rather watch Arctic Terns than television. The North Ronaldsay Bird Observatory says there were 5,290 Arctic Terns on North Ronaldsay on Sunday (a conservative count). That’s over 100 per islander. We never made it to the Bird Observatory; we were too busy observing birds to go there. 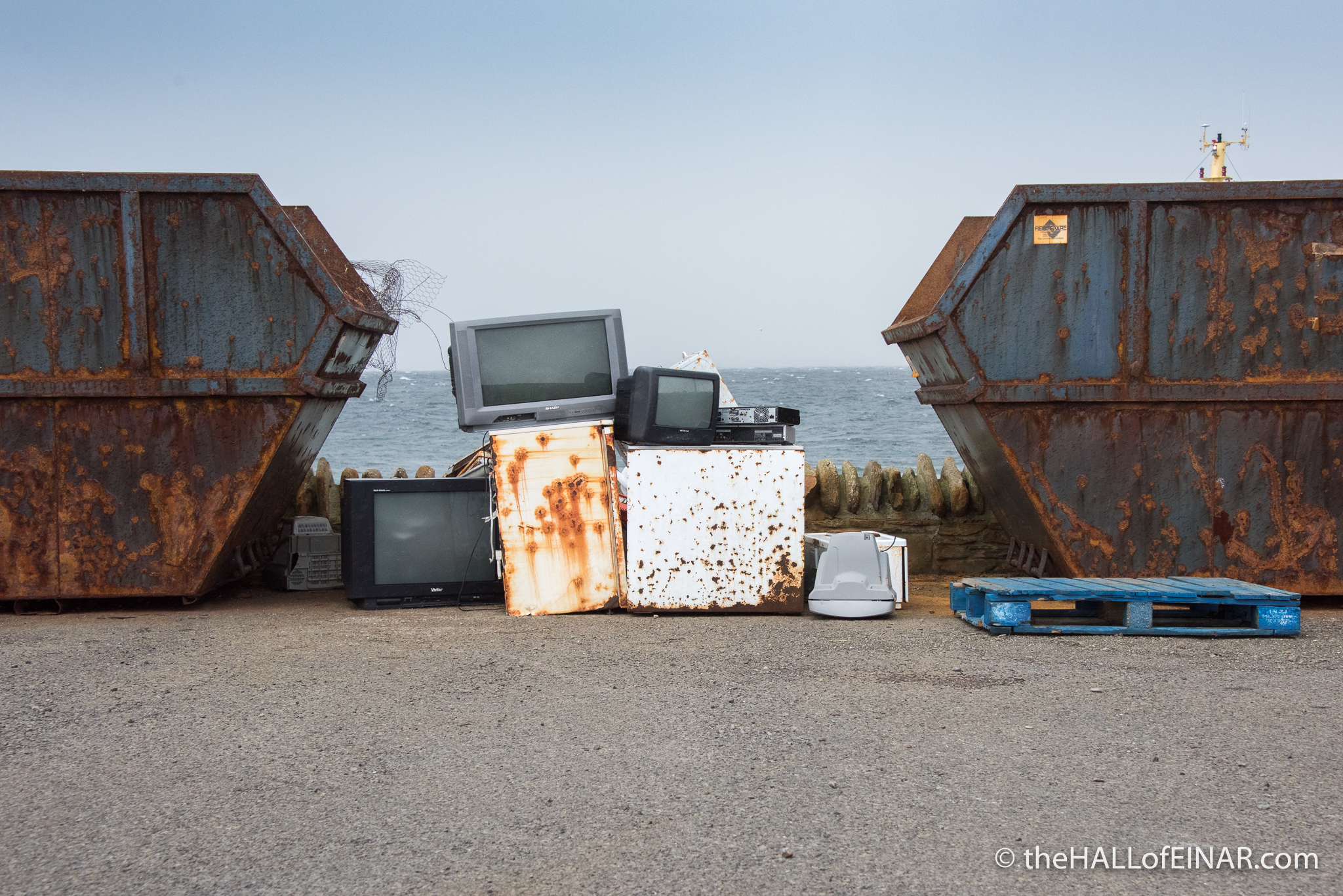 A sudden squall leaves everyone rushing to shelter as the ferry comes back and finally I understand what the webbing and ropes on the car deck were for; so this is how the cars get loaded on and off the ferry:

I’m glad we came on foot. 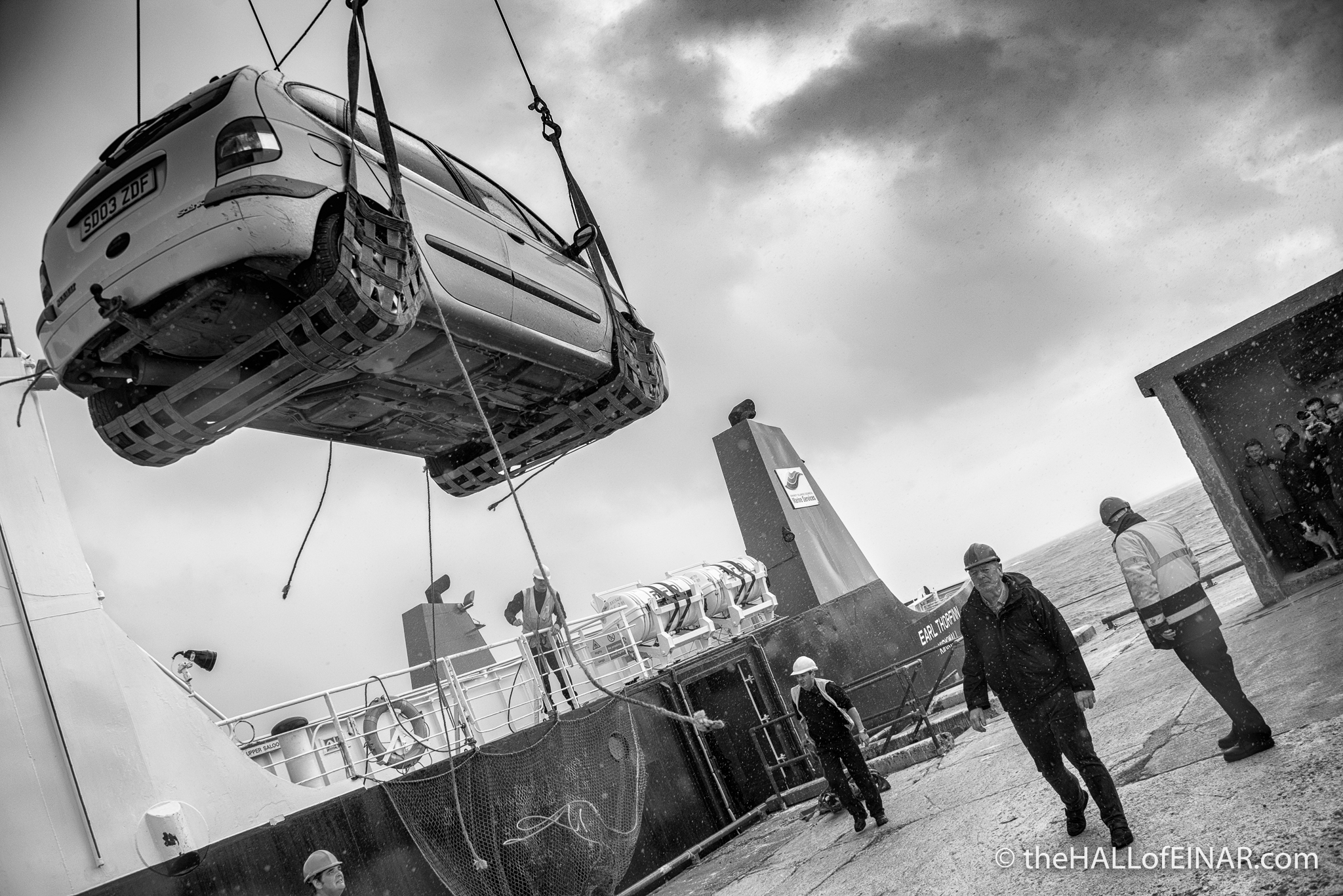 North Ronaldsay is far from a dead or dying island. It has amazing natural and human resources. It just needs the support and investment for us all to appreciate its unique character and characters. And what it needs most of all is families, families with children, to make it complete.

One Response to "Special Sunday Excursion to a living island"